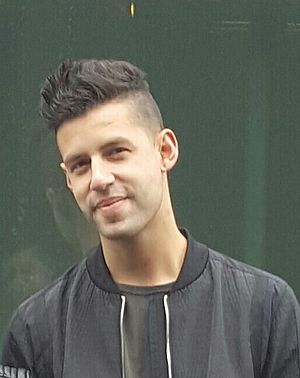 Henry Samuel Pallares, also known as VENTUS, is a Colombian-American music producer, remixer, and disc jockey based out of Denver, Colorado. Pallares first came into recognition after releasing his remix of Krewella's "Alive" in 2014. Since then, VENTUS has redirected his sound towards a combination of Electronic elements while incorporating organic instrumentation, much inspired from his heritage and Colombian roots. In 2017, VENTUS began a bi-weekly Mix Series titled 'Water After Sex'.[citation needed]

Retrieved from "https://en.everybodywiki.com/index.php?title=Ventus_(producer)&oldid=978115"
Categories:
Hidden categories:
This page was last edited on 21 August 2020, at 17:17.
This page has been accessed 174 times.
Content is available under License CC BY-SA 3.0 unless otherwise noted.
Privacy policy
About EverybodyWiki Bios & Wiki
Disclaimers
Mobile view