Acharya Vidyananda[1] (Hindi: आचार्य विद्यानंद) (Born 22 April 1925)[2] is one of the senior most principal thinker, philosopher, writer, composer, editor, curator[3] and a versatile Jain monk who has dedicated his entire life in preaching and practicing the noble concept of nonviolence (Ahimsa) through Jainism.[4][5] He is the disciple of Acharya Deshbhushan.[6] He has written may books and articles.[7] He has spent his past four chaturmas (4 months stay during the rainy season) in Delhi. Several institutions like D.J. Muni Vidyanand Shodhpith, Baraut, Uttar Pradesh are named after him. He has many monk disciples like Muni and lay disciples like Sahu Shanti Prasad Jain, Dr. Jay Kumarji Upadhye, a renowned Jain Scholar. Ahinsa Sthal in Delhi was established at the initiative of Acharya Vidyanandji on the land granted by the late Prime Minister, Rajiv Gandhi. Vidyanand was a notable figure in voicing the opinions of Digambara in the Bahubali affair.[8] There have been several distinguished Jain monks with the same name in history. One of whom is commentator of Tattvartha Sutra and Aptmimamsa, lived during 800 CE.

Born and brought up in a Jain family at Shedbal village in the southern state of Karnataka, India. His Primary education was in Marathi medium at Dhanwad Maharashtra and Higher education was in Kannada medium at Shedbal Karnataka but later he decided to Join Shanti Sagar Chatra Ashram in Shedbal for his higher studies in mastering multiple languages. After completing his initial education he got placed in Ordnance Factory in Pune by his uncles reference. After few months he finds it uncomfortable to contribute in manufacturing of any kind of weapons. So he quit that job and joined a Biscuit manufacturing factory in Pune. Unlike most of the youth in those days Surendera was also a strong believer that India's National freedom can only be achieved by Non-Violent movement and get inclined towards Nobel path of Ahimsa.This was the time when he had decided to dedicate his life towards spreading the concept in its root form as practiced in Jainism. 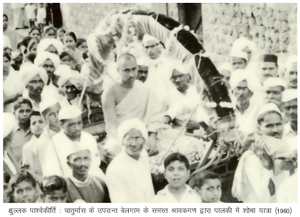 Starting from Kundapur in the year 1946 till 1962 at Shimoga he completed 17 chaturmas before being finally initiated as Muni Vidyanand by Acharya Deshbhushan in 1963. He had become so popular for his lectures and briefings on the Jain scriptures that his 15th Chaturmas in Belgam was celebrated with great enthusiasm and his followers sedan him in a palanquin on their shoulders and took him around the city to introduce him to the public in the year 1960.[citation needed]

After strict practicing and following Jain Acharya Sangh's discipline for 17 years, He decided to get more intense with his course of becoming Jain monk by removing his worldly clothing symbolizing detachment and preserve the real soul for preaching the Noble concept of Ahimsa as the foundation of Jainism.

On 10 July 1963, he approached Acharya Deshbhushan ji at Chandni Chowk in Delhi who was heading the Jain Acharya Sangh at that time and made a formal request to initiate him as a Digambara monk or "Sky Clad Jain Monk". After several rounds of discussion he made his final request on 22 July 1963 and Acharya Deshbhushan ji announced that he will initiate him as Muni Vidyanand on 25 July 1963 and requested his sangh to make the necessary arrangements.

Thursday, July 25, 1963, A huge tent was erected at the Parade ground in Delhi with a center Stage to accommodate thousands of followers gathered to witness the historic event of Initiation of Muni Vidyananda. Soon after the introductory speech Acharya Deshbhushan ji initiated the ceremony and requested Khulak Parshvakirti to follow the instructions along with the holy chants. Parshvakirti followed the instructions and removed all the clothes and ornaments and threw them at the crowd to symbolize his detachment from the worldly matters and materials and initialize his journey as Digambara Muni Vidyananda.[citation needed]

He was given the title of Upadhyaya (Preceptor) by Acharya Deshbhushan (Chief Preceptor) on 17 November 1974 in Delhi. He was then further elevated to Acharya title on 28 June 1987 in Delhi.[9]

He received eminence as Shwet-Pichchhachary after his international followers gifted him feathers of white peacock or Peafowl as soon as Government lifted the Ban on use of Peacock feather on July 24, 2010.

Most of the books, articles and editorials written by Acharya Vidyanand ji are in simplified Hindi though some of them use typical ancient Prakrit and Sanskrit shloka and sutra for references as mentioned in vedas and puranas. He is also mentoring scholars in their advance language studies with his translation skills.

Share
Retrieved from "https://en.everybodywiki.com/index.php?title=Vidyananda&oldid=978467"
Categories:
Hidden categories:
This page was last edited on 21 August 2020, at 20:08.
Content is available under License CC BY-SA 3.0 unless otherwise noted.
This page has been accessed 3,170 times.
Privacy policy
About EverybodyWiki Bios & Wiki
Disclaimers