The Volvo 700 series is a range of executive cars produced by the Swedish manufacturer Volvo Cars from 1982 to 1992. The 700 series was introduced in 1982[2] with the luxurious 760, followed two years later[2] by the lower priced 740 which capitalized on the prestige attained by the very similar 760. The 700 series was then gradually replaced, beginning in 1990, by the 900 series. The 700, designed by Jan Wilsgaard, was originally to have been a replacement for the 200 series, but production of that model continued until the early nineties. The expensive 780, a Bertone-designed coupé version, entered production in 1986 and departed without a direct successor only four years later.

The most visible differences between the 700 and the 900 series were the more rounded corners on the body of the latter, and a somewhat better-appointed interior. The 700 series came to an end in late 1992[3] when the last 740s were built (although they were considered to be of model year 1993). The range was then augmented and finally supplanted by the Volvo 850 in 1993, with the last of the 900s being sold in 1998.

Introduced in early 1984 (in the U.S. and Australia for the 1985 model year), nearly two years after the luxurious 760, the 740 was the lower-end version of the original 760. The 740 was intended to be a mid-size car that offered more style, performance, and luxury than the 200 series. The '4' in the middle of the Volvo model name had once signified a four-cylinder engine, but by the time of the introduction of the 740 it simply meant less luxurious equipment as four- and six-cylinder engines were fitted across the range. The 740 was available as a four-door sedan (sometimes referred to as the 744) and a five-door station wagon (also known as the 745). 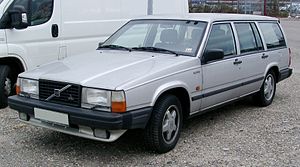 Production of the 740 ceased on October 2, 1992, though the engine, transmission, chassis, and other details continued in the Volvo 940 (see below), which was essentially identical to the 740 with the exception of the rear of the sedans. For 1985, an intercooled version of the 2-litre turbo engine (B200ET) was introduced for markets such as Italy, where larger engines were heavily taxed. This unit produces 160 PS (118 kW) at 5500 rpm, ten horsepower more than the preceding non-intercooled B19ET variant, enough for a claimed 200 km/h (124 mph) top speed.[8] For 1989, a 16-valve version of the larger B230 engine was introduced (B234), with nearly as much peak power as the turbo version. This was Volvo's first multi-valve engine. In 1990, the 740 received a minor facelift with new, smaller, composite headlamps and 780-style tail lights. In 1991, both the 740 and the newly introduced 940 received an updated dashboard, similar in appearance to the ones found in the 760. The 740 remained mostly unchanged for the 1992 model year, and sales ended in 1993 in favour of the Volvo 940.

Aside from styling, 1990 marked a number of mechanical improvements to the 740 series. The B200 and B230 motors received larger 13 mm (0.5 in) connecting rods. The 740 Turbo switched from the Garrett T3-series turbocharger to the Mitsubishi TD04 series, which offers quicker spool-up and better boost at low engine speeds, albeit at the expense of top-end performance. The electronic fuel injection system was upgraded from Bosch LH-Jetronic 2.2 to 2.4 (in 1988 for naturally aspirated cars, in 1990 for turbocharged cars). The newer fuel system offers onboard diagnostics, which are accessible from the engine compartment and require no special equipment. For 1993, the final model year for the 740, the mechanical engine cooling fan was replaced with an electric fan.

Continental markets had some exceptions to this rule. The 740 Turbo 16V (most markets had the 2.3 litre 8-valve turbo engine) was sold mainly in Italy, but also in Portugal and Belgium, and used the 2-litre B204FT engine found also in the 780 for these same markets. The 740 Turbo 16V was equipped with the ECC from the 780 as standard.

Late in 1991, Volvo offered a sedan and wagon badged the 740 SE, standing for "special equipment". The 740 SE came in three colors; red, black, and white. Mechanically, the 740 SE was the same as a normal 740 Turbo, but with many features, such as a power sunroof and leather seats, as standard equipment. The SE also had a special factory color-keyed body kit, including front and rear bumpers, side skirts, and a spoiler for the sedan. The 740 SE, along with the 740 Turbo sedan, was discontinued for 1992.

The 760 was Volvo's first attempt to cement a place in the prestige market, after building a reputation for building solid and safe rather than out-and-out luxurious cars.[dubious – discuss] Jan Wilsgaard, head of Volvo's Design and Styling Team, proposed over 50 new designs for the new car.

This new design was criticized by the media when released: Gordon Murray of Autocar Magazine said, "to me it's obscene. That goes right against the grain of what everybody else is trying to do. To me it looks like a European version of a North American car. It produces the same amount of power as a 2600 or 3500 — in this day and age it disgusts me to see something about like that. It's a definite step backwards." All that changed however when Autocar and Car & Driver got their hands on a turbo intercooled 760; they said it was one of the best handling and fastest accelerating cars they had seen in a while, going from 0-60 mph (97 km/h) in under 8 seconds.[citation needed] 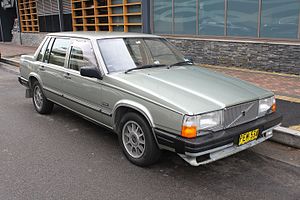 Turbocharged and intercooled variants were added in 1984, station wagon variants and the 740 (the 760's lower-specification sibling) were introduced for the 1985 model year. In 1985, an electronic traction control system was introduced. Unlike the lesser 740, the 760 received standard anti-lock brakes in many models.

For the 1988 model year, the 760 received numerous updates. From the outside, the most noticeable of the over 2000 changes were the revised front sheet metal, including an aluminium hood, recessed windscreen wipers, and new aerodynamic headlights. Inside, all 760s received a revised dashboard which was angled towards the driver, 3-position tilt steering, and a new stereo system. The top versions (standard in the US) were equipped with a new electronic climate control (ECC). Underneath, saloons received the same multi-link independent rear suspension which was also introduced on the 780.[12] The new 4-link rear axle also required a new fuel tank, which was in the form of a saddle, sitting atop the driveshaft. The volume of the tank shrunk by 2 liters, to 80 l (21.1 US gal; 17.6 imp gal).[13] Along with the revised dash, the interior saw the addition of a revised dome light and many fabric accent pieces. The 760 Estate received the same changes, except it continued to use the live rear axle.[13] This was due to the weight increase: the new rear suspension weighed about 40 kg (88 lb) more than the old one, and Volvo meant that loss of payload would not be worth the comfort improvements.[14]

The Volvo 760 was a popular choice as a police car in several parts of Europe. East German leader Erich Honecker often used this Volvo in his governmental car pool. It was inevitably a popular choice with police in Scandinavian countries.

For 1990, its final year of production, Volvo 760 saloons received taillights in the style of the Volvo 780 and minor interior changes. The 760 was discontinued after the 1990 model year (with production ending on 27 June 1990), replaced by the Volvo 960, an update of the 760 chassis. The Volvo 740 outlived the 760, remaining for another two years, finally being discontinued in 1992 after the 850 was launched.

The Volvo 780 coupé debuted at the International Auto Show in Geneva, Switzerland in 1985, marking Volvo's return to the two-door coupé market following the departure of the 262C in 1981. The 780 became available in Europe in 1986 and in United States a year later.

Like its predecessor, the 780 was designed and built by Carrozzeria Bertone in Turin, Italy. The hood, trunk, and roof lines were all slightly lower than the standard 700 series profile, and the C-pillar was wider and had a more gradual slope down to the trunk. Headroom was improved over the 262C because of Bertone’s 1 cm lowering of the roofline. Window frames all had black matte trim, and were accented with chrome. Chrome also highlighted the door handles, bumpers, and side mouldings. Originally, it had been planned to use a smaller, 2,458 cc turbocharged, version of the PRV V6 (as seen in the Renault 25 and Alpine),[18] which had been successfully tested in 740s and 760s. In the smaller engine compartment of the 780, however, the engine overheated and the PRV V6 Turbo never appeared in a Volvo.

The saloon model originally debuted in 1982 in Europe, and was joined by the estate for 1985.

These engines were offered on 700 series vehicles:

Volvo offered various transmissions depending on the year, model, and engine combinations including the:

There were also different suspension combinations depending on the model chosen:

Retrieved from "https://en.everybodywiki.com/index.php?title=Volvo_740&oldid=215307"
Cookies help us deliver our services. By using our services, you agree to our use of cookies.
Categories:
Hidden categories:
This page was last edited on 10 November 2018, at 04:28.
This page has been accessed 444 times.
Content is available under License CC BY-SA 3.0 unless otherwise noted.
Privacy policy
About EverybodyWiki Bios & Wiki
Disclaimers
Mobile view