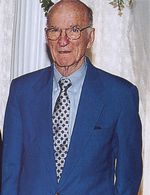 Walter Ray Scott, Sr. (March 19, 1923 – February 23, 2008), usually known as W. Ray Scott, was from 1960 to 1976 the Democratic mayor of Natchitoches, the oldest city in Louisiana. As mayor, he is primarily remembered for his work with the administration of Governor Edwin Washington Edwards in procuring physical expansion and university status for Northwestern State University, formerly Northwestern State College. In addition, he worked to establish the municipal water supply from Sibley Lake in Natchitoches. From 1956 to 1960, Scott was the elected municipal finance commissioner.[1]

Scott was born to Mary D. Scott in Pleasant Hill in Sabine Parish. He served four years in the United States Army during World War II, having been stationed at Iwo Jima. After his military service, Scott attended then NSC on a basketball scholarship and obtained a Bachelor of Science degree in Business Administration.[1] At NSU, he met his future wife, the former Betty Jean McCarthy (July 21, 1929 – March 21, 1999).[2]

For nearly a half century, Scott operated his Cane River Insurance Company. He was a director of City Bank and Trust Company in Natchitoches for twenty-eight years. He was a founding member of the Agitators Club and was also active in the Kiwanis Club. Scott died in a Shreveport hospital. The Scotts married in 1947 and reared six children: Walter Ray Scott, Jr. (deceased), Marianne Scott James, Tommy Scott, Nancy Scott Long, Joseph Kent Scott, and Jeannie Scott. He also had sixteen grandchildren and six great grandchildren. Scott died less than a month prior to his 85th birthday. He is interred at Memory Lawn Cemetery in Natchitoches.[1]

Scott was elected mayor in the Democratic primary held on December 5, 1959. He defeated a retired NSU professor, H. J. Sudbury, 2,338 to 646. The incumbent, Frank Kees, did not seek reelection.[3]

After sixteen years, Scott was succeeded as mayor by Robert B. "Bobby" DeBlieux, a businessman and historical preservationist, who served a single term from 1976 to 1980.

Retrieved from "https://en.everybodywiki.com/index.php?title=W._Ray_Scott&oldid=979283"
Categories:
Hidden categories:
This page was last edited on 22 August 2020, at 00:38.
This page has been accessed 494 times.
Content is available under License CC BY-SA 3.0 unless otherwise noted.
Privacy policy
About EverybodyWiki Bios & Wiki
Disclaimers