A YouTuber, also known as a YouTube personality, YouTube celebrity, or YouTube content creator, is a type of internet celebrity and videographer who has gained popularity from their videos on the video-sharing website YouTube. Networks sometimes support YouTube celebrities. Some YouTube personalities have corporate sponsors who pay for product placement in their clips or production of online ads. As of February 2019, PewDiePie is the most-subscribed YouTuber, with over 87 million subscribers.[1]

The name "YouTuber" refers to person(s) whose main or only platform are YouTube channel(s), personalized subpages of the YouTube video sharing platform.[2] 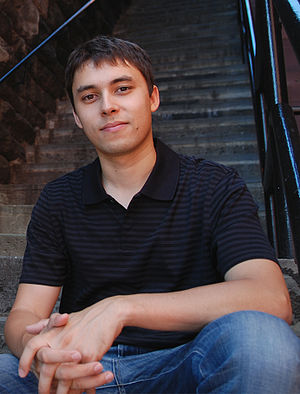 The Internet domain name "www.youtube.com" was activated on February 14, 2005 by Chad Hurley, Steve Chen, and Jawed Karim, when they worked for PayPal.[3] The first YouTube channel "Jawed" was created on April 23, 2005 PDT (April 24, 2005 UTC) by the YouTube co-founder of the same name.[4][5] He uploaded the first YouTube video, a short vlog clip entitled Me at the zoo, on the same day.[6]

In October 2005, YouTube introduced the ability to subscribe to YouTube channels.[7] The New York Times claims that most YouTube videos up until 2006 were focused on different forms of talent, citing back-flip stunts, lip-syncing, and other people's talents being uploaded via clips such as clips of Saturday Night Live.[8] By June 2006, recognized Hollywood and music industry firms had begun to establish formal business ties with "homegrown" YouTube talent—the first believed to be comedian blogger Brooke "Brookers" Brodack (through Carson Daly),[9] then singer Justin Bieber (through Usher),[10] and physician-become-political satirist Bassem Youssef (through an Egyptian television network).[11][12] In 2007 YouTube started its "Partner Program", an ad-revenue-sharing arrangement that allowed for YouTubers to make money off the videos they uploaded to YouTube.[13]

PewDiePie is currently the most-subscribed YouTuber.

According to multiple studies, YouTubers have become an important source of information and entertainment for the millennial-generation. Influential YouTubers are frequently described as microcelebrities.[2] Since YouTube is widely conceived as a bottom-up social media video platform, microcelebrities do not appear to be involved with the established and commercial system of celebrity culture but rather appear self-governed and independent. This appearance in turn leads to YouTubers being seen as more relatable and authentic, also fostered by the direct connection between artist and viewer using the medium of YouTube.[14][2] However, YouTubers these days[when?] are promoting consumerism increasingly more.[citation needed]

In a 2014 survey conducted by the University of Southern California among 13-18 year-olds in the United States on whether 10 YouTube celebrities or 10 traditional celebrities were more influential, YouTube personalities took the first five spots of the ranking, with Smosh ranking as most influential.[14] When repeated in 2015, the survey found six YouTubers on the first ranks, with KSI ranked as most influential.[14][15]

Several prominent YouTubers and their influence were subjects for scientific studies, such as Zoella[2] and PewDiePie.[16] Because of this level of influence, Robert Hovden argued for the creation of a new index similar to the g-index and h-index to evaluate a persons output and impact on YouTube.[17]

Different categories of YouTubers have increasingly been defined such as Beauty Bloggers, Gamers, Vloggers, ASMRists, Mukbangers and Fashion Bloggers.[citation needed]

The success of their YouTube videos has made YouTubers the target of corporate sponsors who pay to be included in the videos. In 2015, Forbes reported that Felix Kjellberg, known on YouTube as PewDiePie, had earned $12 million in 2014, more than some popular actors such as Cameron Diaz or Gwyneth Paltrow.[18] In August 2018, Walmart, Nordstrom, and others also seek YouTube stars for the ambassadorship.[19]

At the end of every year since 2010, YouTube releases a YouTube Rewind video featuring some popular YouTubers from the given year. The video features the year's most popular videos, people, music, movies, memes, and moments on YouTube and elsewhere.[20][21]

Retrieved from "https://en.everybodywiki.com/index.php?title=YouTuber&oldid=345410"
Categories:
Hidden categories:
This page was last edited on 5 March 2019, at 17:43.
Content is available under License CC BY-SA 3.0 unless otherwise noted.
This page has been accessed 4,006 times.
Privacy policy
About EverybodyWiki Bios & Wiki
Disclaimers