Olajide William "JJ" Olatunji (born 19 June 1993),[3] better known as KSI (shortened from his online alias KSIOlajideBT),[upper-alpha 1] is a British YouTube personality, internet personality, comedian, actor, rapper and white-collar boxer.[4][5] After establishing himself on his YouTube channel, which, as of November 2018[update], has more than four billion video views and more than 20 million subscribers to make it the 65th most subscribed channel on YouTube,[6] he has also become well known for his music. KSI released his debut extended play, Keep Up, in 2016, reaching number one on the UK R&B Albums Chart as well as charting in several other countries. 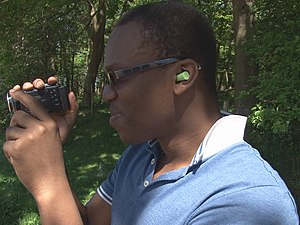 Before his successful channel, Olajide had a YouTube channel (which is still online) called JideJunior, which he created on 24 April 2008.[7] Olajide opened his current YouTube account on 24 July 2009, with a video about the FIFA video game franchise.[8] According to his website, YouTubers such as Weepeler and Hjerpseth inspired him to start his own YouTube career. His main channel was previously focused on association football and FIFA, although he played other games such as Grand Theft Auto V and other PC-based modifications on his secondary channel (KSIOlajidebtHD).[9] His secondary channel contains videos of him playing more casual, arcade and horror games in a manner similar to that of fellow YouTuber PewDiePie.

In February 2013, KSI appeared on the video "KSI VS FIFA // The Record Slam" made by GWRomg in which he broke the previous world record for 'the most goals scored against computer' of 110 goals, by scoring 190 goals. As a result, his name appeared in the Guinness World Records Gamer's Edition (2013).[10]

After defeating Virgin Gaming co-founder Zach Zeldin in a match of FIFA, KSI visited Las Vegas,[11] where he discussed YouTube's launching of a paid-channel subscription project.[12]

On 19 October, he and four other gaming YouTubers formed a group called the Ultimate Sidemen (later shortened to just the Sidemen), which initially consisted of himself, Ethan Payne (Behzinga), Simon Minter (Miniminter), Josh Bradley (Zerkaa), and Tobi Brown (TBJZL). The group decided to add a sixth member in Vikram Barn, known as Vikkstar123, the following month. The group then added a seventh member, Harry Lewis (wroetoshaw or "W2S" for short), in 2014. 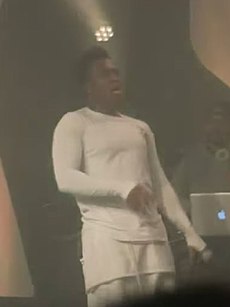 In early 2017, KSI stopped uploading videos to YouTube, later releasing a video in July stating that he was displeased with the direction YouTube seemed to be going. On 4 August 2017, KSI tweeted that he would be leaving the Sidemen group due to internal conflicts with fellow Sidemen member Ethan Payne.[14][15] Shortly thereafter, he released a number of diss track videos criticising members of his then-former group, to which most of the members responded back with their own.[15]

Later that month on 15 August, KSI released a video in which he claimed that he was being deported from the United States (as he was staying in Los Angeles at the time) for receiving an incorrect visa,[16] returning to the group's private mansion which he co-owns, but was otherwise not returning to the group. However, by the following month, he officially rejoined the Sidemen.[citation needed] This led to accusations that the Sidemen group manufactured their conflicts for the sake of getting views, as KSI and the other Sidemen gained a large number of views and subscribers upon uploading their diss tracks.

Most notably, YouTuber Joe Weller released a diss track of his own criticising KSI and Sidemen for faking their "Sidemen war", which led to KSI and Weller attacking each other on Twitter.[15] This resulted in their announcing, at an annual content creator-focused event called Upload (which KSI and some of the other Sidemen members founded), that they would be facing each other in a boxing match on 3 February 2018 at Copper Box Arena in London.[15] During the announcement, the two YouTubers verbally and physically confronted each other, with KSI making fun of Weller's struggles with depression.[15] Both released follow-up videos with KSI apologising for his remarks. In November 2017, KSI released a video discussing the issue of whether his supposed fight with the Sidemen was real or fake, with him saying that "[t]he drama wasn't entirely real, but wasn't entirely fake either."[15] (See the Amateur boxing section below for information on the match.)

In 2011, KSI branched out into music, mainly as a rapper. Starting out with fellow YouTuber Randolph, he released "Heskey Time", a rap song about footballer Emile Heskey which was released on iTunes just before Christmas in 2011. The video features Heskey missing various chances on FIFA. Following the success of "Heskey Time", he began doing a segment on his channel called "Football Rap Battles", a video series, on which he and Randolph play the characters of famous figures from the world of football. Although it started off with raps featuring world footballers including Mario Balotelli and managers like Sir Alex Ferguson, one involves KSI as himself against Robin van Persie, hitting out at van Persie's acrimonious transfer from Arsenal to rivals Manchester United. He appeared in music videos with Droideka, directing and appearing in his music video for his song Get Hyper, whilst also collaborating with British rapper Sway, releasing two tracks with the London born rapper.[citation needed]

KSI was the centre of a controversy following his actions at a Eurogamer event in 2012,[17][18] raised after he appeared at the Xbox One launch party in London.[19] With the reasoning of the controversy due to sexual harassment of attendees at the event from KSI, Microsoft cut ties with KSI and he was banned for life from the Eurogamer Expo.[20] A message from KSI's manager stated: "Sexism is not something he condones or wants to be associated with. He wishes to apologise for any offence the video of 15 months ago may have caused in the short time it was on his YouTube channel, references to it since and subsequently used by other people. In recent months, he has also been actively avoiding certain content seen in the distant past and wants to be judged on the great content and value he gives to brands and partners, without controversy."[21]

On 3 February 2018, KSI competed in his first white collar amateur boxing match against fellow YouTube personality Joe Weller (KSI vs. Joe Weller) at the Copper Box Arena in Hackney Wick, London, winning the fight 1 minute and 30 seconds into the third round by way of technical knockout.[22] On YouTube, the fight drew 1.6 million live viewers, 21 million views within a day,[23] and over 25 million over the next several days, becoming the biggest white-collar boxing fight in history.[24] KSI was awarded the YouTube Boxing Championship Belt.[25]

KSI showed respect to Weller after the fight for being "way harder, way tougher than I thought," and praised him for his commitment to raising awareness on mental health issues. He then proceeded to call out American internet personality Logan Paul, his brother Jake Paul, and retired footballer Rio Ferdinand.[26]

On the weekend of 24 February 2018, it was announced that the Paul brothers would be fighting the Olatunji brothers (KSI and his younger brother Deji, also known as ComedyShortsGamer) in a boxing match,[27] with the matches divided between relative ages (the elder brothers KSI vs. Logan Paul in one match and the younger brothers Deji Olatunji vs. Jake Paul in another match).[27] One judge scored the fight in favour of KSI and two judges scored a draw, resulting in a majority draw.[28] The fight has been labeled "the largest event in YouTube history"[29][30] and "the largest ever amateur boxing fight".[31]

In 2015, KSI released a book titled KSI: I Am A Bellend, called KSI: I Am A Tool in the United States. It is described by its publishers as “an all-out assault on the online universe”,[32] as the book includes his history and controversies on YouTube.[33] The book was released on 24 September 2015 in the UK and five days later in the United States.[33] KSI did a tour supporting the book on 24 September 2015, ending on 4 October 2015.[33]

KSI's younger brother, Deji Olatunji, is also a well known YouTube personality who was previously known as ComedyShortsGamer until August 2018 when he decided to revert to using his real name. The brothers both ranked number one and two respectively as "UK’s Most Influential YouTube Creators" by Tubular Labs in 2015.[34][35]

In late November 2018, it was revealed that KSI and Deji have had an falling out which began when Deji leaked KSI's personal bank records during a diss track video toward YouTube personality Randolph. KSI later condemned Deji's actions when reacting to the diss track and had also expressed his disappointment towards his parents for allowing the publication of his financial records.[36] However, by early-January 2019, the beef between the two brothers was squashed, with Deji apologising to KSI for his "impulsive" and "rash" behaviour.[37]

KSI was born in London but grew up in Watford, Hertfordshire.[1] He attended the Berkhamsted School together with fellow Sidemen member Simon Minter (miniminter).[38]

Share
Retrieved from "https://en.everybodywiki.com/index.php?title=KSI_(entertainer)&oldid=1679241"
Categories:
Hidden categories:
This page was last edited on 3 May 2021, at 14:49.
Content is available under License CC BY-SA 3.0 unless otherwise noted.
This page has been accessed 4,074 times.
Privacy policy
About EverybodyWiki Bios & Wiki
Disclaimers