They have been working in the design field since 2000, when they opened their own workshop of wood, glass and metal products, YUDIN Product. Architectural style of the designers: Minimalism, Eclecticism, Modernism, Scandinavian_design.

Yudin Brothers are also creators of the brand identity of restaurants and cafes, dealing also with the development of the Visual Systems. Thanks to these different activities, they have realized projects in different countries: Ukraine, Poland, Canada, United States, Belarus

From 2019 Vladimir and Aleksandr Yudin are members of the Ukrainian Artist Union.

Aleksandr and Vladimir Yudin were born on April 14, 1980. Aleksandr is 5 minutes older than Vladimir.

After graduating from school, Aleksandr and Vladimir Yudin got a degree at the Kyiv NAOMA - National Academy of Visual Arts and Architecture at the Faculty of graphic design.

Even during their studies, in 2000, the Ukrainian designers began to constantly cooperate with various institutions and establishments, becoming the first specialists in Ukraine to turn to new stylistic trends using the corporate information system. At that time, it was mainly an activity aimed at redesign and restoration. Also, even then, Aleksandr and Vladimir began to create architectural solutions that have become monuments of various cities and towns in Ukraine. The designers, reinterpreting the national Ukrainian aesthetics, were the first to use styles that were unknown to Ukrainians: minimalism, eclecticism, new trends in modernism, Scandinavian and others.

For example, the ONE LOVE Espresso Bar logo, which has received the SALT restaurant award several times, is reminiscent of a traditional Ukrainian ornament for embroideries, made from the image of coffee beans.

For the past 10 years, the creative studio YUDIN Design has been developing design solutions for HoReCa establishments in Ukraine and abroad. About 30 specialists work for the studio and the workshop of the Brothers: engineers, designers, architects, sculptors, masters in working with various materials and structures. The designers’ projects constantly appear in authoritative media about design and help to build an idea of the Ukrainian design worldwide.

The last important publications at the end of 2019, with the French magazine "Harmonies" and the Australian "D + A", also published in many other countries, that published the interiors of the studio YUDIN Design among the best works of the year.

California Restaurant in Zaporizhia, created by the Yudin Brothers

In 2016, Vladimir and Aleksandr Yudin took part in the second season of the popular TV show Hell’s Kitchen on Ukrainian Channel 1+1. The designers acted as co-creators of well-known restaurateur Dima Borisov and TV presenter Olha Freimut. It was thanks to Olha that the designers became known as the "Yudin Brothers", because the presenter constantly used this phrase. The task of Aleksandr and Vladimir on the TV show was to update the appearance of the institutions that failed. Also, during the show, the Ukrainian experts helped to find a good name for restaurants or cafes, developing new logos, menus, staff uniforms, and even original ways of serving dishes (VIS). During the broadcasting of the TV show, Vladimir and Aleksandr began to invite professional workshops to create cultural-meaningful interiors for restaurants and hotels. Their professional opinion and extensive experience, above all, are always interesting to restaurateurs, chefs, young designers.

The origins of the creative studio YUDIN Design[edit]

The Brothers Aleksandr and Vladimir Yudin opened their studio YUDIN Design[3] in 2000. The first serious works of the designers were made for the then famous restaurant chain "Kozyrna Karta". The first projects of Yudin Brothers were in retro and kitsch styles, as they mostly created themed interiors (for example, nautical, Italian, Georgian, etc.).

In total, the twin brothers have designed more than 20 establishments for the "Kozyrna Karta" network.

The designers are currently developing about 30 architectural objects and interiors in different cities of Ukraine and Europe every year, and about 50 brands, including also completed corporate identities.

Every year, the works of the Brothers are nominees or winners of national and international competitions and their creative studio worthily represents the Ukrainian design worldwide.

In 2019, the designers Aleksandr and Vladimir developed a series of cups that symbolize Kyiv: the brand KYIV TO GO, with a chestnut logo in the middle of which is a coffee bean. Thus, the studio YUDIN Design identified the coffee, which has become another gourmet symbol of the capital equal to Kyiv cake, Kyiv-style cutlet, etc. 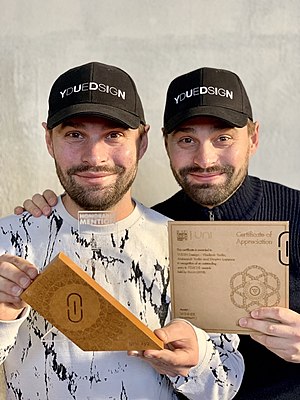 Interium Award Ceremony 2018. The Yudin Brothers receive their sertificates as double winners of the Award.

Share
Retrieved from "https://en.everybodywiki.com/index.php?title=Yudin_Brothers&oldid=2237641"
Categories:
Hidden categories:
This page was last edited on 3 January 2022, at 02:47.
Content is available under License CC BY-SA 3.0 unless otherwise noted.
This page has been accessed 256 times.
Privacy policy
About EverybodyWiki Bios & Wiki
Disclaimers