The 2013 season was Doncaster Rovers Belles's third season in the FA WSL, and their 22nd consecutive season in the top-flight of English women's football.

The Belles played Forfar Farmington and Rangers in an England v. Scotland friendly tournament hosted by Liverpool Ladies at their new ground, Halton Stadium in Widnes.[1]

In April 2013 Doncaster Rovers Belles L.F.C. were demoted by the Football Association (FA) from the FA WSL into a new FA WSL 2 to begin the following year. The timing of the announcement, one game into the 2013 FA WSL season, caused a scandal in English women's football. The decision's basis upon commercial and marketing grounds, rather than sporting merit, was also controversial. Having played in the top tier of women's football for 22 seasons, Doncaster Rovers Belles were replaced by Manchester City Ladies in a move which was financially motivated. An appeal by Doncaster Rovers Belles against the demotion was rejected by the FA's appeal panel in June 2013.

Founded in 1969, Doncaster Rovers Belles grew to dominate English women's football, reaching eleven out of twelve national Cup finals from 1983 to 1994. These achievements took place under the administration of the Women's Football Association (WFA), who ran women's football in England until 1993, when they were dissolved and direct control passed to the FA. Many within the women's game were suspicious of the FA's motives for taking over; Belles founder member Sheila Edmunds expressed concerns that it was "to control us, to keep us in our place."[2] The FA planned a professional women's league to start in 2003, but ultimately failed to deliver. It was 2011, following an abortive attempt in 2010, that a semi-professional replacement for the existing Premier League was inaugurated. Clubs had to apply for a license based on various financial and organisational criteria. During the process, the Belles' local rivals Leeds Carnegie's bid collapsed when their backers Leeds Metropolitan University realised they could not afford the required minimum outlay to join the league. After the announcement, an editorial in She Kicks discussed the possibility of the new league starting without the Belles:[3]

In the event Doncaster Rovers Belles were among the eight successful clubs from the 16 applicants. Manager John Buckley warned that financial constraints would make the Belles the "poorest payers in the league by a country mile."[4] Prior to the 2011 season the club lost Rachel Williams and other players to Birmingham City because they were restricted to a player budget eight times smaller than that enjoyed by Birmingham,[5] who were controversially financed by Carson Yeung.[6]

Doncaster Rovers Belles would begin the 2014 season in the lower tier, irrespective of their performance during the season which had only just begun.[7]

The admittance of expansion team Manchester City into the top tier at Doncaster Rovers Belles' expense was reported to be financially motivated. Since their foundation in 1989 Manchester City's female team had played in the lower divisions but they had recently developed closer links with their wealthy male parent club, funded by Mansour bin Zayed Al Nahyan.[8] In their first season playing at a national level of the league structure, Manchester City had finished fourth in the 2012–13 FA Women's Premier League National Division. The FA's apparent preference for a North American-style franchise system over traditional promotion and relegation led to anger and allegations that the governing body valued money above principles of sporting competition.[9][10] Aside from the morality of the FA's decision, its legality was called into question.[11] 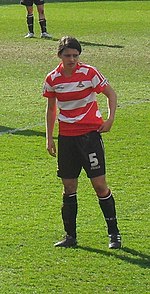 Jess Sigsworth pledged to stay with the Belles in WSL2

Doncaster Rovers Belles reacted with shock and anger. John Buckley described the situation as "the most farcical thing I've ever heard," while vice-chairman Alan Smart publicly ridiculed the FA for relegating the club after one league match, rendering the 2013 season meaningless.[12] The club announced they would appeal the decision.[13] They had the support of their WSL rivals; Arsenal Ladies' Vic Akers described the governing body's actions as, variously, "morally scandalous," "unjust," and "a joke".[14] An online petition protesting the FA's decision was started by writers from popular STAND, a Doncaster Rovers fanzine, which attracted over 9,000 signatures. The club thanked celebrities Dermot O'Leary, Louis Tomlinson, Danny Baker, Ian Wright, Jeff Stelling and Robbie Savage for their support.[15] Mayor of Doncaster Ros Jones attended a fan protest at the Frenchgate Centre.[16] Local Members of Parliament Rosie Winterton, Caroline Flint and Ed Miliband issued a letter to FA chairman David Bernstein which asked for greater transparency and for the matter to be given further consideration.[17]

The FA were also criticised for what was described as a "heavy handed" reaction to supporter protests at the 2013 FA Women's Cup final, which was contested by Arsenal and Bristol at Doncaster's Keepmoat Stadium.[18] Former Belles players worried that the removal of top tier status would harm the legacy their success had built. Fears were raised that the Belles best current players would be forced to leave for top flight clubs, in order to progress their careers.[19] Jessica Sigsworth, an England Under-19 international and with Millie Bright one half of the Belles' 'twin tanks' strikeforce, pledged her loyalty to the club even if the demotion was ratified.[20]

The Belles' appeal against the decision was rejected by the FA's Independent Appeals Panel which comprised Craig Moore QC and two members of the FA's Football Panel. In its statement of reasons, the FA's Appeals Panel found that the appeal failed "at the first hurdle" because clause 12 in the terms and conditions for applications left the FA "free to exercise its discretion in licensing clubs as it sees fit".[21]

It also rejected the club's argument that the Selection Panel was not independent, as had been advertised at the outset of the bid process. Admitting that three of the four Selection Panel members were FA employees, the Appeals Panel stated that the Selection Panel's independence had never been a "contractual term" but was used only in publicity materials. It also interpreted 'independence' in a narrow sense of Selection Panel members' independence from the applicant clubs, not the FA itself. The Appeals Panel also considered that a "wholly independent" Selection Panel would have been "impractical". Sally Horrox (a consultant working as the FA's WSL Project Lead) telephoned the club's vice-Chairman Alan Smart in March 2013 and gave assurances that the process would be independent. However the Appeal Panel found this statement "was not capable of imposing any binding obligation" for actual independence. Furthermore, the Appeal Panel ruled, any lack of independence affected all the other applicants equally and did not necessarily disadvantage the Belles.

FA Board Director and WSL Chairman Michael Game led the Selection Panel and publicly encouraged Manchester City to apply so that the WSL would benefit from the wealth of their male parent club's Arab owner. The Belles' appeal suggested that this was indicative of Games' bias and "closed mind". The Appeal Panel did not find bias and seized upon different wording used in vice-Chairman Alan Smart's witness statement and the club's letter of appeal. The former quoted Game as looking forward to Manchester City applying, while the latter cited Game looking forward to welcoming Manchester City. Smart's explanation that the same point was conveyed in both was not accepted by the Appeal Panel. Selection Panel member Sue Hough had served for many years in the FA women's committee alongside her husband Peter. The Belles' appeal expressed concerns over Hough's impartiality, given she had recently been in conflict with the club. In September 2012 she had presided over an episode in which Doncaster were ordered to play their home fixture with Birmingham at Birmingham's ground, only for the WSL to then reverse its own decision. Alan Smart recalled Hough's simmering anger and humilation at having been overruled. After the rejection of the appeal John Buckley reaffirmed his commitment to the club and expressed his desire to lead them "straight back up." He did not rule out a legal challenge.[22]

Share
Retrieved from "https://en.everybodywiki.com/index.php?title=2013_Doncaster_Rovers_Belles_L.F.C._season&oldid=1018720"
Categories:
Hidden category:
This page was last edited on 25 September 2020, at 00:10.
Content is available under License CC BY-SA 3.0 unless otherwise noted.
This page has been accessed 469 times.
Privacy policy
About EverybodyWiki Bios & Wiki
Disclaimers