In the early afternoon of October 6, 2018, a limousine crashed at the junction of New York state routes 30 and 30A north of Schoharie, 40 miles (64 km) west of Albany, the state capital, killing 20—the driver, all 17 passengers and two pedestrians in a nearby parking lot.[1][2] It is the worst disaster in the state since a plane crashed into a house outside Buffalo in 2009, killing 50.[3]

The passengers were a group of young adults from communities in the Capital District who were on their way to celebrate one member's 30th birthday at a local winery. Among them were four sisters and two recently married couples. Investigation of the crash has revealed some deficiencies with the limousine and driver. 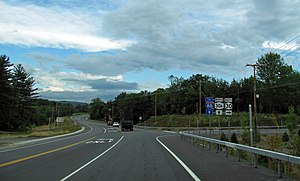 The accident site, photographed in 2012. The limo came down NY 30, from the right, and went across the road into the parking lot whose driveway is at left

Shortly before 2 p.m. on October 6, a 2001 Ford Excursion SUV-style stretch limousine traveling southbound on New York State Route 30 (NY 30) in northern Schoharie County[4] failed to stop at the T-intersection with New York State Route 30A (NY 30A) and continued into the parking lot of the nearby Apple Barrel Country Store where it crashed into a parked 2015 Toyota Highlander[5] and then came to a stop in a gully.[6] The store manager told reporters that customers in the store parking lot were killed when the limo sped down the hill "probably over 60 mph [97 km/h]".[7] Later it emerged that two pedestrians in the parking lot were killed by the Highlander, which was driven into a drainage ditch 50 feet (15 m) away.[5] All 18 people in the limousine were killed.[8]

An eyewitness claimed the crash sounded like an explosion, and when she exited her parked car she saw a body on the ground and then registered the screaming from bystanders.[9] Another eyewitness told reporters she saw "...this large van, a very unusual looking vehicle out here in Schoharie in the bushes and really wrecked, hit a tree", and she watched first responders who broke windows to get victims out.[10]

During a press conference officials released that all 20 deceased victims were adults and that 18 deceased were occupants of the limousine and two deceased victims were bystanders.[3] While the deceased individuals have not been officially named, as of October 7 some reports were utilizing GoFundMe and other social media accounts to name some of the victims.[5]

Investigators from the National Transportation Safety Board (NTSB) were at the scene of the crash.[11] A state trooper told reporters that they had deployed a reconstruction unit, facial identification and a drone in order to gather data about the crash and the victims.[8]

The family that owns the Apple Barrel Country Store told reporters that the intersection and hill is a recurring issue. Reportedly tractor-trailers have repeatedly come down the hill too fast and entered the stores parking lot, and that while improvements had been made the intersection was still dangerous.[5] The intersection had been redone in 2008 due to a fatal accident, but it has not stopped the issue.[12]

New York Governor Andrew Cuomo said at an October 8 news conference that the driver of the limo did not have the proper license; a commercial drivers license, to operate the vehicle. Cuomo also stated that the limo was a "chopped vehicle" that had been cut and extended and needed a federal certificate to operate, which the limo involved in the crash did not have. It had also failed its inspection the previous month, making it illegal to operate on public roads in the state until it passed. Prestige Limousines, the owner and operator, was told to cease and desist from further limousine operations until further notice.[13]

New York Governor Andrew Cuomo released a statement which expressed his condolences to the victims, commended the first responders actions, and highlighted that the state police were working with federal and local authorities to investigate the crash.[14] Senator Chuck Schumer released a statement via Twitter, that highlighted his thoughts and prayers for those affected and first responders.[15]

The Apple Barrel Country Store began to collect donations for local first responders, who are a mostly volunteer organization, and there is a planned vigil to honor the victims at the store on October 9.[16]

Retrieved from "https://en.everybodywiki.com/index.php?title=2018_Schoharie,_New_York_limousine_crash&oldid=846533"
Categories:
Hidden categories:
This page was last edited on 13 July 2020, at 18:46.
This page has been accessed 510 times.
Content is available under License CC BY-SA 3.0 unless otherwise noted.
Privacy policy
About EverybodyWiki Bios & Wiki
Disclaimers