A Nest of Vipers (novel)

A Nest of Vipers (Italian: Un covo di vipere) is a 2013 novel by Andrea Camilleri, translated into English in 2017 by Stephen Sartarelli.

It is the 21st novel of the internationally popular Inspector Montalbano series. 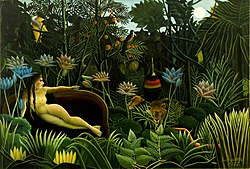 Once again at the beginning of the novel the reader witnesses a dream of Montalbano where the inspector and his girlfriend Livia find themselves in a sort of Garden of Eden that recalls a painting by Henri Rousseau. The dream is interrupted by the sudden awakening of Montalbano at dawn but this time it is not the usual phone call from the officer Catarella that awakes the inspector. Montalbano's sleep is actually interrupted by the nearby chirping of a nightingale: an unusual singing for time and place so that the intrigued inspector gets up to see the little bird and discovers that he has been deceived. It is not a nightingale but an homeless who is whistling and who, questioned by the inspector, tells him, expressing himself in a perfect Italian, that he has taken refuge on the veranda of the Montalbano's house to shelter himself from the storm of the night. The inspector would like continue to chat with the strange and interesting character but the duty calls him to the Police station where Catarella informs him that a murder has occurred.

The victim is an accountant, Cosimo Barletta, killed with a gunshot in his neck. The reason of this murder seems incomprehensible: the accountant had one house in Vigàta and one by the sea, the cottage where the body is found. Cosimo Barletta, widower and father of Arturo and Giovanna, led an apparent calm life as well; at least it seems so until Montalbano discovers in the double bottom of a desk drawer some photos and letters that reveal an equivocal personality. Barletta's sons then affirm that their father was not that example of honesty that appeared and they are sure that he had left a will which has now disappeared.

Precisely at the height of the investigation, Livia arrives in Vigàta and tells Montalbano that she knows Mario, the strange homeless Montalbano would like to discover the events that led him to live as an outcast.

Eventually the inspector arrives to the solution of the mysteries but a truth appears that perhaps he would have preferred not to discover.

It was first adapted for television by RAI with Luca Zingaretti in the TV series Inspector Montalbano. The episode was aired on 27 February 2017.

Share
Retrieved from "https://en.everybodywiki.com/index.php?title=A_Nest_of_Vipers_(novel)&oldid=848223"
Categories:
Hidden categories:
This page was last edited on 14 July 2020, at 03:37.
Content is available under License CC BY-SA 3.0 unless otherwise noted.
This page has been accessed 335 times.
Privacy policy
About EverybodyWiki Bios & Wiki
Disclaimers