Adrian Toomes' is a fictional character portrayed by Michael Keaton in the Marvel Cinematic Universe (MCU) and Sony's Spider-Man Universe (SSU) film franchises, based on the Marvel Comics character of the same name, going by his criminal name, Vulture. In the film Spider-Man: Homecoming (2017), he is a...

The same incarnation of the character from Spider-Man: Homecoming will appear in the SSU film Morbius (2022), with Keaton reprising his role. 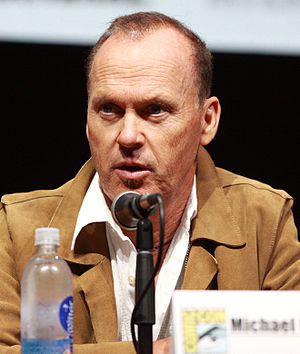 In April 2016, Michael Keaton entered talks to play a villain,[1] but dropped out of discussions shortly thereafter due to scheduling conflicts with The Founder.[2][3] He soon reentered talks for the role after a change in schedule for that film,[3] and closed the deal in late May.[4] Logan Marshall-Green was cast as another villain alongside Keaton's character.[5] At San Diego Comic-Con International 2016, Marvel confirmed Keaton's casting,[6] and in November 2016, Feige confirmed that Keaton would play Adrian Toomes / Vulture.[7]

Toomes uses a suit with mechanical wings forged from Chitauri technology.[8] Also in Spider-Man: Homecoming, Toomes is revealed to be the father of Liz, Parker's love interest.[9] Director Jon Watts wanted him to be a "regular guy", closer to John C. Reilly's Nova Corpsman Rhomann Dey from Guardians of the Galaxy (2014) than other MCU villains like Thanos and Ultron, to go with Spider-Man as a "regular kid who becomes a superhero".[10][11] This helped avoid Toomes drawing the attention of the Avengers, and provided someone that Parker would be able to defeat while still learning to use his abilities.[12] Keaton said Toomes was not completely villainous, as "there's parts of him that you go, 'You know what? I might see his point.'"[13] Co-producer Eric Hauserman Carroll likened Toomes to "the dark Tony Stark",[14] a "businessman with a family. He wants to look out for his kids ... He doesn't have these big delusions of grandeur where he wants to take over the world, or replace the government, or even defeat the Avengers or anything. He just wants his shot at the good life."[15] Keaton was not hesitant to portray another comic book character after playing Batman in Tim Burton's 1989 film and its 1992 sequel.[13]

In 2012, following the Battle of New York, Toomes chooses to become a criminal after the creation of the Department of Damage Control (DODC), a joint venture between the federal government and Tony Stark, and Toomes' company, Bestman Salvage, is run out of business. His associates, Herman Schultz, Phineas Mason, Jackson Brice, and Randy Vale, he begins an illegal arms-dealing business that reverse-engineers and weaponized Chitauri technology that they have scavenged and salvaged, selling it on the black market while Toomes' flight suit is equipped with turbine-powered wings, claw-like wingtips, and boot-mounted talons.

In 2016, he comes across Spider-Man, and deduces the wall crawlers secret identity, threatening him with retaliation unless he stops interfering with his job. However, Spider-Man thwarts Toomes' attempt to hijack a DODC plane carrying Avengers weaponry and saves his life when his suit malfunctions before Harold "Happy" Hogan and the FBI find and arrest Toomes, resulting in his family of his wife and Liz to move away. Later, an imprisoned Toomes is approached by Mac Gargan, who wants to confirm whether or not Toomes knows Spider-Man's secret identity, which Toomes denies.

Keaton's portrayal of Toomes, as well as the character himself, have been praised, with some calling him the "best villain of the MCU so far".[17] ScreenRant praised the character's mindset and dynamic, saying "In Toomes' mind, he's providing a necessary service - one that balances the scales for "the little guys" in a world increasingly overrun by superpowered beings. His disdain for Tony Stark and his ilk is rooted in the belief that Stark himself is a hypocrite".[18] A review on Stuff said that "as brief as his role is, the Vulture finds himself one of the more sympathetic foes in the MCU line up."[19]

Retrieved from "https://en.everybodywiki.com/index.php?title=Adrian_Toomes_(Marvel_Cinematic_Universe)&oldid=1997624"
Categories:
Hidden categories:
This page was last edited on 2 September 2021, at 12:57.
This page has been accessed 49 times.
Content is available under License CC BY-SA 3.0 unless otherwise noted.
Privacy policy
About EverybodyWiki Bios & Wiki
Disclaimers