In this Philippine name for indigenous people, this person is addressed by the sole name, Alena.
‹ The template Infobox character is being considered for merging. ›

Alena is a character and one of the protagonists of the Encantadia series, written by Suzette Doctolero. The Encantadia franchise, consisting of four series Encantadia (2005), Etheria (2005–06), Encantadia: Pag-ibig Hanggang Wakas (2006), and Encantadia (2016), is primarily focused on Alena's journey towards finding a true love and building a family. Alena is portrayed by actress Karylle on the first 3 series, and in the spin-off movie Mulawin: The Movie, while Gabbi Garcia portrayed the character in the 2016 series of the same name.[1][2]

In Encantadia, Alena is the third daughter of Minea, the Queen of Lireo to a sapiryan named Enuo. Alena was known as the Keeper of the Gem of Water. Unlike her sister Pirena, she is not aspiring to become the Queen of Lireo, but rather find her true love and build a family, through Ybarro (Ybrrahim), the prince of Sapiro. She had two offspring, Kahlil and Armea. In the end, she ascended the throne of Sapiro and continued her reign until Etheria (2006). She was then succeeded by her daughter Armea in Encantadia: Pag-ibig Hanggang Wakas (2006).

Encantadia is a spin-off of Mulawin. In Mulawin, a similar character named Linang (portrayed by Sheryl Cruz) was Encantadia's diwata of water and could be considered as the first version of the character. Linang however had a lovechild from a Mulawin named Mulagat.

The story unfolds in Lireo, the kingdom where Queen Mine-a lives with her daughters Amihan, Alena, Danaya, and Pirena. The four Sangg'res are tasked to be the new keepers of the brilyantes. Their skills in war and their powers as the royalty of the diwatas are believed to be the strength of Lireo. As long as the gemstones are kept properly, the balance of nature in Encantadia remains.

Alena is the third of the four daughters of Mine-a and her first daughter with Enuo.[3] She is known as kindhearted and merciful of the four Sang'gres but is the heavily challenged one.[3] She is known to have an everlasting beauty and powerful voice that can hypnotize anyone.[1] She is the most romantic of the four Sang'gres and is not an aspirant of any throne in Encantadia.[3] When her sister Pirena stole the Gem of Fire, her mother decided to hand her the Gem of Water for safe keeping.[3] She is Ybarro's love interest, where she had a child named Kahlil.[1] In the 2005 series, Alena's weapon is a spear while in the 2016 requel, she uses a pilum named "agos"(flow) and inherited Adhara's powerful staff named "Lupig".[4] 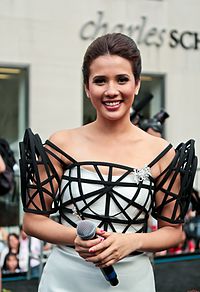 Alena never desired to be queen, because she knew what her mother had to sacrifice in the name of her duty for Lireo. Alena has captured the heart of a common warrior named Ybarro who happened to be the lost prince of Sapiro Kingdom.[5] But their love story was not to be without an antagonist. That role easily fell in the hands of Hitano, one of Lireo's soldiers who abducted her after Pirena erased all her memories. Pirena tricked Alena by disguising as "Bathalang Emre" so she can obtain the water gem and instructed Hitano to take her sister away from Lireo.[6] Pirena managed to convince Amihan and Danaya that their sister was already dead, a part of her plan to overthrow Amihan as the Queen of Lireo.[6] While living in the forests of Encantadia, she had used the name Akesha. She was one for a long time until the two playful Adamyans, Banak and Nakba spotted her in the forest and reported it to Danaya leading to her rescue. Hitano attempted to kidnap her again when he escaped, but the princess fought him after her skill as a warrior had finally returned. Alena's sisters attempted to figure out what happened to her and the water gem all these years through Imaw's cane. Unknown to them, it was actually Pirena's plan all along. She delivered a son before named Kahlil, a Sang'gre fated not to experience childhood before turning into a flower to avoid her from dying. When she regained her physical body, she reunited with her sisters but never with her child who Danaya unknowingly killed. By the end of Encantadia, Alena would have been Queen of Lireo after Pirena renounced her right subsequent to Lira's abdication in favor of a life with her mortal beloved, but Ybrahim interrupted and took the hand of Alena for marriage making her his queen consort. They were married in the shorelines of Sapiro.[5][7]

A prophecy by Ether was established a long time ago that if the last keen of the diwatas was born, the fallen Kingdom of Etheria will rise again. When Cassandra, granddaughter of Amihan was born, the prophecy became true and the fallen Kingdom poses a threat to now peaceful Encantadia. Alena with her three sisters went back to the past to revert the prophecy by changing the history. Alena headed their fight against the four Herans of Etheria in which they gain victory with the help of the "Inang brilyante".[8]

Because of the defeat of the Etherians, Ether flew around her kingdom which was all destroyed to find the Four herans. She found them all and kept their spirits in a crystal ball and brought them to the future. The Crystal ball broke and their spirits became free. They practiced fighting and planned to steal the four gems so Etheria may once again rise back in glory. Alena fought against the Etherians once again to keep the gems in their territory. She had another offspring with King Ybrahim named Armea. After the fight between them and the Etherians, Alena was succeeded by her daughter Armea as the Queen of Sapiro and believed to have vanished with her other sisters.[9]

The 2016 series is a reboot (often called as requel or retelling-sequel) to the 2005 fantasy series with the same name.[10] It is the fourth series of the Encantadia franchise and is 11 years apart from the third one.[2] It features the same character and story of Alena with the 2005 series.[2] It was portrayed by actress Gabbi Garcia who underwent vigorous trainings and repeated audition call backs.[11] Unlike in the 2005 show where Alena had a spear as her weapon, the 2016 Alena now carries a pilum (or javelin) named Agos and also the powerful Adhara's staff, named Lupig.[1]

Retrieved from "https://en.everybodywiki.com/index.php?title=Alena_(Encantadia)&oldid=1128661"
Categories:
This page was last edited on 17 November 2020, at 07:47.
This page has been accessed 134 times.
Content is available under License CC BY-SA 3.0 unless otherwise noted.
Privacy policy
About EverybodyWiki Bios & Wiki
Disclaimers