Annu Kapoor (born as Anil Kapoor[1][2][3][4] on 20 February 1956)[5] is an Indian film actor and television presenter best-remembered for hosting the vocal reality show Antakshari from 1993 to 2006 and his roles in Mr. India, Vicky Donor (2012) and Jolly LLB 2 (2017). He received Filmfare award as well as National Film Award for Best Supporting Actor for Vicky Donor.

Annu Kapoor was born in Itwara, Bhopal, Madhya Pradesh, on 20 February 1956, to Madanlal, a Punjabi father and Kamal, a Bengali mother. His father owned a travelling Parsi theatre company which performed in cities and towns, and his mother was a poet and a trained classical singer. His grandfather Dr Kripa Ram Kapoor was a doctor in the British Army and his great grandfather Lala Ganga Ram Kapoor, a revolutionary who was executed during the Indian freedom struggle.

Due to poor financial circumstances, he had to quit school following secondary education. With a salary of ₹ 40, his mother worked as a teacher. On his father's insistence, he joined his theatre company. Following a stint there, he joined National School of Drama in 1976, after his brother Ranjit Kapoor, who was already a student there insisted. After graduating from the National School of Drama and a brief stint with its repertory company, in 1981, he played a 70-year-old man in the play Ek Ruka Hua Faisla in Bombay (now Mumbai). Film director Shyam Benegal who saw Kapoor perform, sent him a letter of appreciation and signed him for his 1983 film, Mandi.[6] 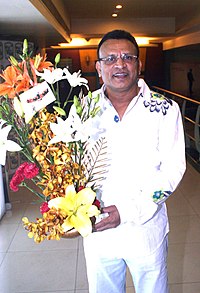 Kapoor began his career as a stage actor in 1979 and was noticed in 1984's Ek Ruka Hua Faisla, directed by Basu Chatterjee and written by elder brother Ranjeet. Annu made his film debut in Mandi, (directed by Shyam Benegal) in 1983. His career has spanned over 30 years, including Bollywood cinema, television serials and game shows. Kapoor is best remembered for hosting the singing show Close-Up Antakshari, produced by Zee TV. His performance as an obsessive-compulsive sperm-bank physician in 2012's Vicky Donor met with critical and popular acclaim. He worked in the horror TV serial Kile ka Rahasya (1989) as a cop who fond of singing. Kapoor has also appeared in Yamla Pagla Deewana 2.[7]

In 2007, Antakshari – The National Challenge was relaunched on Star One. The previous year, its "final" episode was telecast; the programme's initial run was from 1993 to 2006. His range of roles varies from portrayal as Saint Kabir in DD National TV serial of the same name, as Mahatma Gandhi in Sardar and Veer Savarkar in Kaala Pani, to police inspector in 7 Khoon Maaf, a petty thief in Utsav to comedic villain in Hum.

The Golden Era – With Annu Kapoor on the Mastiii channel is a nostalgia TV show about Indian cinema, adorned with classical era's Hindi film songs and commentary by Annu Kapoor on unheard tales of Bollywood Cinema's Legends.[8]

Currently, he does a radio programme on 92.7 Big FM called "Suhaana Safar with Annu Kapoor on 92.7 Big FM". It's a daily show that features nationally on the radio networks covering all Hindi speaking radio stations across the country. He recreates the magic of the Golden era with unforgettable melodies of that era and untold stories of the stars and films of the Hindi Cinema. The show comes with the tagline "Filmy Duniya Ki Kahi Ankahi Kahaniya".

Kapoor's entire family is associated with art. His mother, Kamal Shabnam Kapoor, was a poet, teacher and scholar of Urdu, Arabic and Persian.[9][citation needed] Kapoor has promoted India's positive aspects in his programmes. Kapoor's sister Seema Kapoor, was married to actor Om Puri.[10][11]

His elder brother, Ranjit, is a director and screenwriter and his sister, Seema, is a producer and actor. Kapoor's younger brother, Nikhil, is a writer and lyricist. Annu has four children (three sons— Kavan, Maahir and Evaan—and a daughter, Aradhita) from two marriages. His wife, Anupama, is American by birth.

He changed his name from Anil Kapoor to Annu Kapoor to avoid confusion with the hero of the film Anil Kapoor, while acting in Tezaab.[1][2][3][4]

Share
Retrieved from "https://en.everybodywiki.com/index.php?title=Annu_Kapoor&oldid=819835"
Categories:
Hidden categories:
This page was last edited on 19 June 2020, at 14:23.
Content is available under License CC BY-SA 3.0 unless otherwise noted.
This page has been accessed 1,275 times.
Privacy policy
About EverybodyWiki Bios & Wiki
Disclaimers