Jai Kishan Kakubhai "Jackie" Shroff (born 1 February 1957) is an Indian actor. He has been in the Hindi cinema (Bollywood) industry for almost four decades and as of 2017[update] has appeared in more than 220 films in thirteen languages (Hindi, Konkani, Kannada, Marathi, Oriya, Punjabi, Bengali, Malayalam, Tamil, Telugu, Bhojpuri, Gujarati, and English language).[3][4] He has won four Filmfare Awards among other accolades. He has also appeared in several successful short films.

Shroff was born as Jai Kishan Kakubhai Shroff in Mumbai, India. His father, Kakabhai Haribhai Shroff, was a Gujarati and his mother was a Turk from Kazakhstan.[2] His maternal grandmother escaped to Ladakh along with her seven daughters when there was a coup in Kazakhstan. They migrated to Delhi, and finally to Mumbai.[2][5] His father came from a Gujarati family of merchants and traders. However, they lost their entire money in the stock market and his father had to leave home at the age of 17. His father met his mother when both were teenagers and got married.[2]

As a youngster, he modelled in a few advertisements including Savage perfumes. It was one of his classmates in school who gave Shroff his name "Jackie" and then filmmaker Subhash Ghai stuck to this name when he launched him in the film Hero.[6][7] Shroff regularly revisits his childhood home in Teen Batti.[8]

Shroff married his longtime girlfriend Ayesha Dutt, a model who later became a film producer, on her birthday, 5 June 1987.[9][10] The couple runs a media company Jackie Shroff Entertainment Limited. They jointly owned 10% shares in Sony TV from its launch until 2012, when they sold their stake and ended their 15-year-long association with Sony TV. They have two children, a son, Bollywood actor Tiger Shroff and daughter, Krishna Shroff.

He is a life member of the International Film And Television Club of Asian Academy of Film & Television.

Shroff dropped out of school after his 11th standard as his family did not have much money. He tried his hand working as an apprentice chef at Taj Hotels and as a flight attendant at Air India, but he was rejected from both places because of his lack of qualifications.[10] He then started working as a travel agent in a local company called "Trade Wings" near Jehangir Art Gallery.[5] An advertising agency accountant spotted him at the bus stand and asked him if he would be interested in modelling. The next day, Shroff went to the advertising agency (National advertising agency) located in the same building as Davar's college near Flora Fountain for the photo shoot during his lunch time. This photo shoot for a suit shirt launched Shroff on his modelling path. In 1982, Shroff made his acting debut in Dev Anand's[11] movie Swami Dada. In 1983, Subhash Ghai cast him in the lead role for the movie Hero, paired against Meenakshi Seshadri. The film was a success.[7][12] He continued to work in Subhash Ghai movies, irrespective of any role that was offered. After Hero, he did several other films, such as Andar Baahar. Jaanoo and Yudh were successful. In 1986 he did Karma which became the highest-grossing film of 1986. His next film to be released was Kaash. Later films, such as Dahleez and Sachché Ká Bol-Bálá were critically acclaimed, but failed at the box office. But he came back to success through films such as Ram Lakhan, Tridev, and Parinda, which won him filmfare award for best actor. In the 90s he was part of successful films such as Saudagar, Angaar, Sapne Sajan Ke, Gardish, Khalnayak, 1942: A Love Story, Rangeela, Agnisakshi, Border, And Shapath.[13]

In 2017, Shroff made his debut in Konkani, acting in the film Soul Curry, which even won him an award. Subsequently, he is to act in another Konkani film scheduled to release in 2019, titled Kantaar.[15][16]

In October 2018, he acted in a short film, The Playboy Mr. Sawhney.[17] He was also seen in Paltan. He is to feature in many films in 2019, like Firrkie, Bharat, Saaho, and Romeo Akbar Walter.[18] He is also going to star in Prasthanam, which Hindi remake of Telugu film with same name alongside Ali Fazal and Sanjay Dutt.[19]

Shroff has hosted many television shows like Lehrein, Chirtrahar and Missing.[20] Dealing with stories of missing people who were never found, Missing was popular for its creative narration by Shroff. The show was broadcast on Sony TV, of which he owned some shares.[21] Shroff was also a judge on the magic show India's Magic Star, broadcast on Indian channel STAR One. The show began on 3 July 2010 and ended on 5 September 2010.[22] In 2014, Shroff and his son Tiger Shroff made an appearance on Comedy Nights with Kapil.[13] In 2019 Shroff made his digital debut with the series Criminal Justice.[23]

He has an organic farm, where he grows organic plants, trees and herbs. Jackie attended the opening of the environment Jaldhaara Foundation.[24][25][26] He is also the brand ambassador of Thalassemia India[27] and over the years has supported many causes like HIV/AIDS awareness and abolishment of female foeticide. He has also funded the treatment and education of many underprivileged children.[28][29][30]

Shroff participated in the Hiru Golden Film Awards 2016 in Sri Lanka as a special guest along with Bollywood actors such as Sunil Shetty, Neil Nitin Mukesh, and actresses Sridevi, Madhuri Dixit, and Karishma Kapoor.[31] 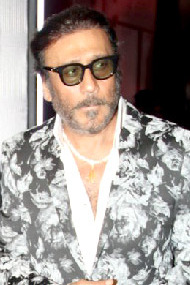 Jackie Shroff at the GQ Best Dressed Awards event in 2017

He has received a Doctor of Arts for his valuable contribution in the field of Cinema from the Invertis University.[34]

Retrieved from "https://en.everybodywiki.com/index.php?title=Jackie_Shroff&oldid=820084"
Categories:
Hidden categories:
This page was last edited on 19 June 2020, at 16:34.
This page has been accessed 243 times.
Content is available under License CC BY-SA 3.0 unless otherwise noted.
Privacy policy
About EverybodyWiki Bios & Wiki
Disclaimers