Asif Zulfiqar Ali (born April 2, 1990)[1] is a former wide receiver and special teamer in the AFL, AIFA, and RIFL leagues. Ali was a member of the professional minor league franchise, the Chicago Falcons of the Royal Ironman Football League. He was also a member of the San Jose Sabercats, Stockton Wolves, and California Eagles of the AFL, af2, and American Indoor Football leagues.

Ali is the first Arena football player and executive of Pakistani descent, as well as the first person to serve simultaneously as player and general manager in the professional Arena football and minor leagues. Former NFL players such as Lofa Tatupu and others have regarded Ali as one of the greatest players in RIFL & AIFA history [1][2][3]

Ali was born April 2, 1990 in Fremont, California, the third of four siblings. Ali attended Foothill High School in Pleasanton, California and graduated in 2008, but did not participate in football as a result of athletic ineligibility.[4][5]

Having not played in high school, Ali then spent his freshman season at San Jose City College as a walk-on, playing slot receiver and special teams under Coach Keith "K-Dubb" Williams, who was fellow wide receiver James Jones' coach at San Jose State. Ali left the team prior to the start of the regular season due to personal reasons.

After Coach Williams left SJCC for Fresno State, Ali then enrolled at West Valley College in Saratoga, California during the 2009–10 season, playing slotback and special teams for the football team, replicating the same career trajectory as current NCAA coach Jason Tarver. Ali did not see any playing time at slot receiver, and played the majority of his reps at special teams. Although the Vikings completed their first ever 0-10 season in school history, Ali earned the Vikings All-Iron award for his efforts on special teams at the conclusion of the 2009 season. West Valley College decided to end the football program after the 2013 season.

Ali opted out of transferring to a four year, forfeiting his final two years of college eligibility to tryout for the professional leagues. During the 2010 offseason, Ali trained with Adam Tafralis and Rufus Skillern at Paye's Place in San Carlos, California.

After failing to get much traction on scouts' radars and going undrafted in the 2010 NFL Draft, Ali tried out with the newly formed af2 team, the San Jose Wolves. Ali registered a 4.54 40 yard dash at the combine but was not signed. Ali then signed with the San Jose Sabercats for the 2010 off-season as a member of the practice squad while they were undergoing an organizational re-alignment to rejoin the AFL. Ali remained on the training camp roster and was released during final cuts prior to the start of the 2011 season.[6]

Ali then worked out for the professional indoor franchise, the Stockton Wolves, in the 2011 offseason, but was not signed by the team. Ali remained an unsigned free agent until the Wolves re-branded as the California Eagles in 2012.[7]

Ali was on the Eagles' practice squad and was activated to the active roster during the inaugural 2012 season.

Ali played in all 5 games and registered 8 tackles and 5 blocks on Special Teams. Ali's best single-season performance on special teams came in Week 4, where he registered 3 tackles and 2 blocks on both kick-off and punt return against the Arizona Outlaws. Ali finished the regular season with 11 catches for 128 yards and a touchdown, which contributed to the 3-2 regular season record, en route to the Eagles representing the Western Conference as a replacement for the suspended Western Conference Champion Ontario Warriors, and advanced to the AIFA Championship game where they faced the Cape Fear Heroes, who were entering the game as heavy favorites, as the first undefeated team in AIFA history at 8-0.

Ali made key plays on special-teams with 3 tackles on kick-off and had 3 receptions for 24 yards in the 2012 AIFA Championship game. However it was a 79-27 loss for the Eagles to the Heroes, who completed the first ever perfect undefeated season at 9-0 in AIFA history. Ali was named All-AIF Special Teams First-Team selection and Cal Eagles Special Teams Player of the Year at the conclusion of the season. [8] 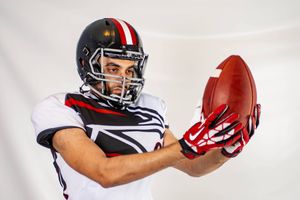 Ali in a promotional photo for the Falcons (July 2018) 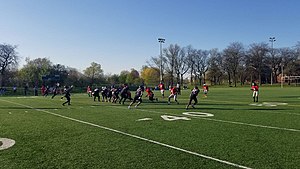 Ali, (second from left) with the Chicago Falcons in a preseason game against Joliet Buccaneers at Columbus Park on May 6, 2018

After the Eagles folded in 2013, Ali remained an unsigned free agent for five seasons thereafter until signing with the independent minor league & semi-professional football team, the Chicago Falcons on April 19, 2018, for the 2018 season.

Ali made his preseason debut in first quarter opening kick-off against the Chicago Cardinals on April 22nd. Ali saw action on special teams and at slot in the fourth quarter and registered a block for a five yard run by Falcons' All-Star running back Christopher Blackmon against the Joliet Buccaneers on May 6th, the Falcons' first win of the season (16-6). Ali registered his first reception of the season for 22 yards, followed up by another reception for 8 yards in his regular season debut, a home game against the Chicago Blaze on May 19th. Ali followed up with a key block on special-teams, setting up a 36-yard kick-off return for the Falcons against the Southern Lake Blue Devils in the 2018 RIFL season opener on June 2nd in Salem, Wisconsin. Ali had a key block on punt against the Kalamazoo Titans, in Kalamazoo, Michigan, setting up a 46 yard punt on July 6th. Ali registered a tackle on opening kick-off against the Madison Mad Dawgs on July 27th, in which he sustained a minor concussion from a knee to the helmet during the hit out of bounds. Ali capped off the 2018 season with assisting in a fumble recovery on kickoff against the eventual RIFL champions, the Midway Marauders, on August 4th. 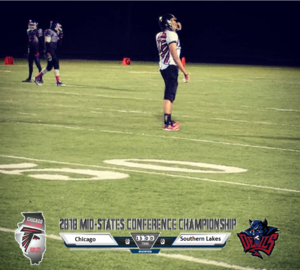 The Falcons finished the season 2-7 but were selected as participants for the Mid-States Playoffs and made the Conference Championship Game as the third seed which took place on October 6th against the second seeded Southern Lakes Blue Devils in Westosha Sports Complex in Salem, Wisconsin, in a rematch of the RIFL regular season opener on June 2nd which resulted in a 32-6 loss for the Falcons. Ali played special teams and saw action at slot and registered a key block for a six yard run for a first down by Falcons' All-Star running back Christopher Blackmon. The Falcons ultimately fell in a 37-0 blowout loss to the Blue Devils who went on to lose to the eventual RIFL / Mid-States Champions, the Midway Marauders 57-14 in the 2018 Mid-States Championship game the following weekend. Ali ended his career with a playoff record of 0-2 with both an appearance in the championship & conference championship game respectively, by a combined margin of defeat of 116-27.

At the conclusion of the 2018 RIFL season, Ali finished with 2 receptions for 30 yards, and was selected to participate in the 2018 RIFL-NEFL All-Star Game for his special teams contributions at the Woodside Sports Complex in Wisconsin Dells, Wisconsin on October 27th. The RIFL All-Stars faced the NEFL All-Stars and ultimately lost 14-18. Ali ended the 2018 season with setting the single season record for most consecutive starts and games played by a Falcons Special Teams player. In addition to the All-Star selection, Ali was selected to All-First Team for his contributions on special-teams, and was named Chicago Falcons Special Teams Player of the Year in addition to RIFL Comeback Player of the Year. [9]

At the conclusion of the 2018 season, Ali was released from the Falcons and signed with the semi-professional & minor league team, the Illinois Carnage of the Unified Football League on October 11, 2018 for the 2019 UFL season.

Ali left the Carnage and formed the minor league & semi-professional team, the Windy City Watchers, on February 12, 2019, serving as player-coach.

After not appearing in a single preseason game with the Watchers, Ali announced his retirement from playing football in an Instagram post on March 16, 2019 after 6 seasons of arena, semi-professional, & minor league football.[5]

Ali joined Whitney High School in Rocklin, CA as a member of the coaching staff as varsity offensive assistant on May 3, 2019 [6]. 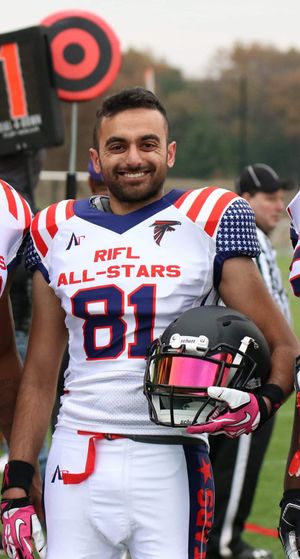 Ali wore the number 81 his entire playing career from college to the professional ranks, (with the exception of preseason where he wore numbers 84, 14, and 6), and played slot receiver, cornerback, and special teams. While Ali's primary position was slot receiver, he typically saw time on special teams and occasionally was used at corner to rush during blitz packages. Additionally, Ali, who is known for being undersized at his unusually small build at 155 pounds, wasn't as athletically gifted as most other wide receivers of his era. As such, Ali relied heavily on his blocking effort and special teams play to make an impact on games.

Ali is the third of four siblings and is a Muslim. During his time in free agency from 2013–17, Ali transferred from West Valley and completed both his Bachelor's and Master's Degrees in Healthcare Administration from California State University, East Bay in 2014 and 2017. Ali was previously employed for UnitedHealth Group and Tata Consultancy Services, Blue Cross and Blue Shield of Illinois, Montana, New Mexico, Oklahoma & Texas, GlobalLogic and now works as a Product Owner for Humac, in Phoenix, Arizona, addition to acting as Founder and CEO for his own consulting firm, ATC Consulting, LLC.

You have to Sign in or create an account to comment this article !
Retrieved from "https://en.everybodywiki.com/index.php?title=Asif_Ali&oldid=939776"
Categories:
Hidden categories:
This page was last edited on 10 August 2020, at 07:12.
This page has been accessed 952 times.
Content is available under License CC BY-SA 3.0 unless otherwise noted.
Privacy policy
About EverybodyWiki Bios & Wiki
Disclaimers
Mobile view