Ben Slack (born 1982), professionally known as Benn, or Benn Down, is a British/French musician, singer, songwriter, composer, record label owner, and author. He is best known as vocalist and instrumentalist for the bands/musical projects Two Down, Portraits, and Quiet One, as well as his solo musical work, under the pseudonym Benn. Slack has been releasing music online since 2007, first as one half of Two Down, under which he has released four albums, before expanding to other projects. In 2014, he founded Hurt Records, a record label to house all his music independently, separate from traditional record labels and online stores.

Slack is also well known for being a part of the YouTube network PlayTheGame, under which he primarily creates gaming-based content.

While in University in 2007, Slack and fellow classmate Callum Richardson formed Two Down, a rap/rock act.[1] "We were both studying music and one of the assignments was to create some sort of song."[2] This was the catalyst for the band's formation. Their debut album, Origins?, was produced shortly after, in the space of around 24 hours,[3] and then released on their own website. This was Slack’s first major musical act, and first one to gain significant attention. Released shortly after was a companion album, Origins? - The Sessions, largely comprised of acoustic versions, remixes, and demos of the songs found on Origins?.

Two Down’s second studio album, Forward March!, was released later in 2007, and their third, Here is Lost, in early 2008. This initial trilogy of records, released in quick succession, plus some live shows performed alongside them, garnered the band a small, yet dedicated, fanbase.

The next few years of Two Down’s releases consisted of various EPs and unrelated singles, as production on a fourth album started, stopped, and restarted with production facing issues, partially as the band were not satisfied with its quality,[4][5] and additionally they faced hardware issues which resulted in major parts of the album being deleted.[6] In this period releases included EPs Labyrinth, The Planet, and Stripped, as well as singles Wait for Me, Futureproof, and Black Clouds (from an early version of their fourth album). These releases and the creation of a YouTube channel (as well as Slack’s other channels in which Two Down was referenced and shared) further increased their popularity.

Towards the end of 2012, Two Down released Humanity and the Wolf, their final EP and major release before the band went into full production on what would eventually become their fourth album, The Two Lost Boys.

The first single from The Two Lost Boys, I’m Still Here, was released in April 2014, and the second, Heartshot, in May 2015. An acoustic version of Heartshot had previously debuted on a live performance Two Down did on EDGE FM.[7] The final album, released the next October, contained songs and elements originating as early as 2008[8], and was the first Two Down album to be released on, and after the creation of Slack’s record label, Hurt Records.

Two Down’s 2016 releases were a remastered version of Here is Lost, followed by a live EP, Live in the Ends, recorded and filmed in South London with an audience of invited Hurt Records fans.[9] An acoustic EP, Live Acoustic Set, followed in 2017.

Two Down’s latest release is the EP We All Let Go, released in September 2018. The EP was partially funded via fan support on Kickstarter, reaching a goal of £2000 from over 50 backers. This was Slack’s second musical project to be funded this way, after the debut album of Portraits, one of his other bands. 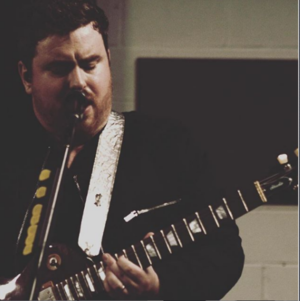 ‘Benn’ is the project name for all of Slack’s solo releases, the first of which was the 2009 EP Revenge Music, mostly comprised of rap/rock, similar to Two Down’s output, but with a variety of rappers other than Two Down partner Callum Richardson providing vocals.

In 2012, Slack released his Call of Duty Zombies mode-inspired album Zombies I, which featured, amongst its music, narrative tracks featuring dialogue and exposition, which would become a staple of Slack’s future solo records. A sequel to this album, Zombies III, released the next year in 2013.

2013 also saw the release of Extinction, an album inspired by Call of Duty Ghosts’ Extinction mode. This album saw Slack exploring new musical territory, with the album being primarily synth-based.

2014/15 saw the release of multiple game-inspired singles, including Attrition (inspired by Titanfall), the first release among Benn’s projects to debut on Hurt Records, alongside the launch of the label itself. Also released in this period were Borderlands, Yesterday (inspired by Fallout 4), and a cover of The Cranberries’ Zombie (again inspired by Call of Duty's Zombies mode).

Unsatisfied with the production and quality of the original Zombies albums, in 2017 Slack released the album Z.1, a reboot and remake of the story started in Zombies I. No longer attached or connected to the Call of Duty Zombies storyline however, the album is instead based on a novel Slack wrote entitled Z[10], following a man’s search for his wife and daughter after zombie-like creatures called Mosh cause a post-apocalyptic catastrophe. This would be the first of five planned ‘Z’ albums, made with drummer John Williams (also of Portraits), the first four of which follow this story, and the fifth planned to be an acoustic album featuring new versions of songs from the previous albums[11]. 2018 saw the release of Z.2 and Z.3.

In 2012 Slack started releasing acoustic demos and covers under the project name SongsbyBenn. Eventually this project turned into Quiet One. The first single revealed to be part of Quiet One was Sink, released alongside a music video. More demos followed until the releases of singles Sailboat and Lonely Soldier in 2014.

Quiet One’s self-titled debut album was released in July 2014, and contained songs originally recorded for SongsbyBenn, including Melancholia and Black Hole. Quiet One is Hurt Records’ most successful release, being the only album released under the label to be certified Gold.

In October 2014 Slack released Intimate, a live version of Quiet One released as a film showing the live performances of, and insight into each song. All the profits raised by the film went to the charity War Child.

Numerous singles followed in the next couple years after the debut album, including covers of Snow Patrol’s Run, Simon and Garfunkel’s Sound of Silence, and original songs Sun, Blue-Eyed Giant (inspired by Game of Thrones), and Temple.

Quiet One’s latest major release is the Upsidedown EP, released in October 2015, which included some outtakes from the album, as well as newly-written songs.

Unsatisfied with how large record labels and online music storefronts operate, and wanting to give his audience further insight into his music production, Slack created and launched his own label and music store, Hurt Records, in early 2014.[12] The site would host and sell his discography, and future releases. Most of the Benn and Two Down releases were available on the store from launch, and the single Attrition launched on the platform alongside it.

While for the first few years of its existence Hurt Records solely sold music Slack created or contributed towards, the label is planning to host and represent separate artists in the future.

Slack came into contact with archaeologist, lecturer, and drummer John Williams, both being fans of the other, and the two formed Portraits, with the intent to create historically-inspired music.

Portraits debut single, From 4.28, concerns geologist James Hutton and his theories on deep time, and was released in early 2015.

To support the funding of a Portraits album (the making of which necessitated the cost of transporting Williams and his equipment to the UK), Slack and Williams turned to Kickstarter, where their goal of $7,500 dollars was reached with the help of over 70 backers.[13]

Portraits released their debut album, Monad, in December 2016. The album’s concept explores human belief and self-reflection throughout time, and is cyclical, looping on itself at the conclusion, and containing numerous musical cycles at different scales throughout.[14]

Pressure Fashions Diamonds was originally the name of one of Slack’s solo projects, under which the album Hard to Breathe was made, but never released. Some of the songs from this project were recreated for Quiet One, including Take Me Away.

In 2016, Pressure Fashions Diamonds reformed as a four-person band, comprised of Slack, John Williams (of Portraits), singer/songwriter Mel Mather, and bassist Max Wright. They released five singles simultaneously in February 2017, as part of a debut EP. An album is expected to follow.

Slack’s releases and projects span a wide variety of genres, including rock, metal, rap, acoustic, among others, and his vocal range is multi-octave, displaying both high and low registers throughout his music, ranging from falsetto to low-pitched screams.

Slack founded the PlayTheGame YouTube network in 2010 and has been creating content for it since, alongside numerous other ‘directors’ working for the network. As of January 2019, the main PlayTheGame channel, PlayTheGameCentral, has over 160,000 subscribers.[15] PlayTheGame’s YouTube channels primarily feature videos based around Call of Duty Zombies, including Let’s Plays, and weapon and Easter Egg guides. PlayTheGame has branched out to Borderlands, Halo, and other games as well, however.

Slack has endorsed/partnered with various guitar and amp producers, including Victory Amps[16] and Hysteria Guitars.[17]

Slack produced a short-lived documentary series entitled Underworld, which was intended to explore "some of the world's most secret places".[18] Only one episode was ultimately produced, however, which focused on Kelvedon Hatch Secret Nuclear Bunker.

This article "Ben Slack" is from Wikipedia. The list of its authors can be seen in its historical and/or the page Edithistory:Ben Slack. Articles copied from Draft Namespace on Wikipedia could be seen on the Draft Namespace of Wikipedia and not main one.

Retrieved from "https://en.everybodywiki.com/index.php?title=Ben_Slack&oldid=864000"
Category:
Hidden categories:
This page was last edited on 18 July 2020, at 14:15.
This page has been accessed 1,232 times.
Content is available under License CC BY-SA 3.0 unless otherwise noted.
Privacy policy
About EverybodyWiki Bios & Wiki
Disclaimers
Dark mode