Berber separatism in North Africa refers to a century-long independence and autonomy struggle of ethnic Berber groups in the areas of modern Morocco, Algeria, Mali, Niger and Libya.

French colonists often exploited and instrumentalized these tensions in their experience in North Africa to divide and conquer.[4] Tuareg rebellions against colonial rule can be traced back to at least 1916. Whereas, the first major chapter of this modern separatism was embodied in the Rif War,[5][6] which led to the creation of short-lived Rif Republic (1920–1926).

Despite the disintegration of this Berber state, the independence movement continued during the 20th century in Kabylie, Algeria, and in the 21st century was led by Tuareg tribes in Mali and Libya (the failed attempt to form the Azawad state within Mali in 2012 and de facto formation of Tuareg autonomy of Ghat within Libya since 2014), and resurging in Morocco from 2013,[7] escalating into a Berber protest movement in 2016–17.

The Rif War was an armed conflict fought during the first half of the 1920s between the colonial power Spain (later joined by France) and the Berber tribes of the Rif mountainous region. Led by Abd al-Karim, the Riffians at first inflicted several defeats on the Spanish forces by using guerrilla tactics and captured European weapons. After France's entry into the conflict and the major landing of Spanish troops at Al Hoceima, considered the first amphibious landing in history to involve the use of tanks and aircraft, Abd el-Karim surrendered to the French and was taken into exile.[8]

The nature of the Rif War is still controversial among historians today. Some see in it a harbinger of the decolonization process in North Africa, while others, on the contrary, see it as one of the last colonial wars, given that it is the decision of the Spaniards to conquer the Rif — nominally part of their Moroccan protectorate but still independent de facto — that launched the conflict in 1921.[9]

The French colonial forces in Morocco promulgated the Berber Decree on May 16, 1930, which placed non-Arabic speaking Moroccans more directly under French control, and also characterized the arabophone urban elite as ethnically Arab, and Amazigh-speaking populations as inherently different.[4] This legislation, though soon repealed, had a lasting effect on Moroccan society.

In 1958, Moroccan King Hassan II ordered thousands of troops to the Rif region to quell a civil disobedience movement that had called for social and political rights.[10] As a result, many left the Rif for Europe in search of a better life, returning to their ancestral towns only to build homes that they lived in during vacations or after retirement. This, along with the diversion of much of the region's arable land for cannabis planting, has decimated the local economy and environment. 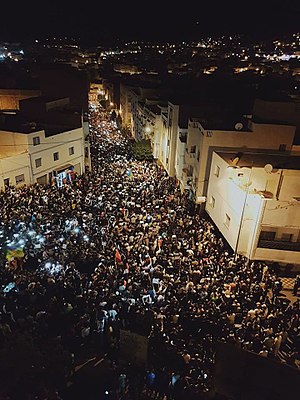 Rif Hirak protests May 5, 2017 in the Rif region of Morocco

Since late 2016, massive riots have spread across Moroccan Berber communities in the Rif region, initiated after a death of a fishmonger in Al-Hoceima in October 2016. On 31 October, massive demonstrations took place across Morocco, staged by the Berber minority.[11] During January and February 2017, the riots intensified and were marked by unemployment concerns, with around thirty police officers injured in the north Moroccan town of al-Hoceima, after tear gas and rubber bullets were deployed against thousands of mostly young protesters.[12]

Another escalation took place in May 2017.[13] The protests were led by Nasser Zefzafi, founder of the Al-Hirak al-Shaabi, or the Popular Movement.[14] Zefzafi was arrested by Moroccan Police in late May 2017. Thousands took to the streets in Al-Hoceima since Zefzafi’s arrest, and demonstrations have also spread to the capital Rabat and Casablanca. Demonstrators proclaimed “We are all Zefzafi” and waved Berber flags, with around 40 people arrested.[14] By 30 May, the number of arrested protesters reached 70.[15]

The party was formed by Hocine Ait Ahmed on 29 September 1963[16][17] in the city of Tizi-Ouzou to oppose Ben Bella's government. Following the party's creation, a number of towns in Kabylia gave them their support. The Ben Bella government, aided by the Armée de Libération nationale, swiftly took control of the dissident towns during a mostly bloodless confrontation. Preferring to avoid direct conflict, the FFS and its soldiers retracted into the mountains from where they could launch guerrilla tactics.

The Berber Spring was a period of political protest and civil activism in 1980 claiming recognition of the Berber identity and language in Algeria, with events mainly taking place in Kabylie and Algiers. The background was marked by two decades of harsh Arabization measures instituted by the Arab nationalist FLN dictatorship government, which refused to recognize Algeria's Berber identity and banned the Berber language altogether.

The Berber Spring is traditionally dated as beginning on March 10, 1980, with the banning of a conference due to be held by the Kabyle intellectual Mouloud Mammeri at Hasnaoua University in Tizi-Ouzou. A critical point was the coordinated arrest of hundreds of Berber activists, students and doctors on April 20, sparking a general strike.

While the Berber Spring was in the end violently suppressed by the Algerian authorities, it created a lasting legacy for Kabylie and the Berbers across North Africa. Many of today's prominent Kabyle politicians and activists made their name during the Berber Spring events, and organizations such as the Rally for Culture and Democracy (RCD) and the Berber Cultural Movement (Mouvement Culturel Berbère – MCB) were later created by activists of the Spring. The Spring was also an important event for Algeria's nascent human rights community, including outside Berber circles.

Since the dismantling of the one-party FLN system in 1989—followed by abortive democratization and civil war—a few of the demands of the Berber Spring have been met by the state, and the Berber language is now an official language of Algeria. However, this is still distinct from Arabic, which remains the official language, though many other points of contention remain.

The Black Spring (Kabyle: Tafsut Taberkant) was a series of violent disturbances and political demonstrations by Kabyle activists in the Kabylie region of Algeria in 2001, which were met by repressive police measures and became a potent symbol of Kabyle discontent with the national government. The protests took place against a backdrop of long-standing cultural marginalization of the Highlander Kabyle, a homogeneous Berber linguistic group in Algeria

In 2014 and 2015 a number of ethnic riot incidents plagued Algeria, with a dozen mortal casualties in violence between ethnic Arabs and Berbers.

In February 2017, protests erupted in Algeria, with some 500 protesters marching.[18] The protest was organized by human rights groups, some trade unionists and a small opposition party. Algeria's main opposition forces were not taking part. Large numbers of police had been mobilized to try to prevent the protest from going ahead. Police at the protest detained Belaid Abrika, a prominent opposition figure and campaigner for the rights of Algeria's large Berber minority.

The Kaocen revolt was a Tuareg rebellion against French colonial rule of the area around the Aïr Mountains of northern Niger during 1916–17.

Memory of the revolt and the killings in its wake remain fresh in the minds of modern Tuareg, to whom it is seen as both part of a large anti-colonial struggle, and amongst some as part of the post independence struggle for autonomy from the existing governments of Niger and its neighbors.

Retrieved from "https://en.everybodywiki.com/index.php?title=Berber_separatism_in_North_Africa&oldid=1646139"
Categories:
Hidden category:
This page was last edited on 20 April 2021, at 09:44.
This page has been accessed 136 times.
Content is available under License CC BY-SA 3.0 unless otherwise noted.
Privacy policy
About EverybodyWiki Bios & Wiki
Disclaimers