blake madez (born april 29, 2001), birth name blake madez, is an American popstar ,rapper and songwriter based in Montgomery, Alabama. He is best known for being one of the youngest uprising pop musicians , which gained him alot of fans in just a few months. he is currently living in south africa

Blake Madez has always aspired to do music since the age of 7, he grew up listening to pop music and hip hop and would freestyle for is friends at school .(blake currently attends homeschooling ). He grew up with one of his parents in the north of johannesburg.

blake is expected to drop his first album soon as fans have requested .[1]

my music doesnt fall under rap im more of a popstar ,i just make good music.

— blake on his rapping technique in a interview 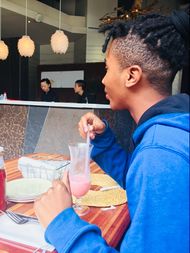 Retrieved from "https://en.everybodywiki.com/index.php?title=Blake_madez&oldid=865605"
Categories:
Hidden categories:
This page was last edited on 18 July 2020, at 19:35.
This page has been accessed 1,008 times.
Content is available under License CC BY-SA 3.0 unless otherwise noted.
Privacy policy
About EverybodyWiki Bios & Wiki
Disclaimers