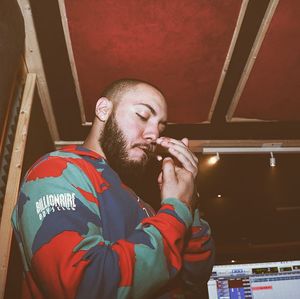 Booky Blanco smoking in the studio

Booky Blanco is an American rapper known for creating Rap/Hip-Hop music in the present time.[1]

Booky Blanco was born on January 31st, 1996, in Elizabeth, New Jersey. He is widely recognized as an American rapper, songwriter,and entrepreneur. Coming up on the east coast scene in northern New Jersey, specifically Union County. Blanco independently started his career in 2016 by independently releasing music. He started to garner success when his break out local hit "Show Me" began making noise in the tri-state area. Also known for his entrepreneurial endeavors, in the summer of 2019 Blanco founded his clothing, merchandise, and lifestyle brand "RTD Apparel" which stands for Roll The Dice. Blanco is currently signed to his self owned independent record label "RTD Recordings". Blanco is the son to Alexa Rivas and Anthony Blanco, both American. He grew up all throughout Union County and moved a lot during his younger years constantly going from school to school, he eventually graduated from Union High School in the class of 2014 in Union Township.

Retrieved from "https://en.everybodywiki.com/index.php?title=Booky_Blanco&oldid=833717"
Category:
Hidden categories:
This page was last edited on 2 July 2020, at 19:41.
This page has been accessed 458 times.
Content is available under License CC BY-SA 3.0 unless otherwise noted.
Privacy policy
About EverybodyWiki Bios & Wiki
Disclaimers
Mobile view