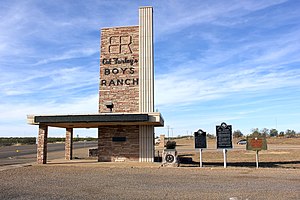 Farley was born in tiny settlement of Saxton, Iowa and grew up in Elmore, Minnesota. He started playing semi-professional baseball as a teenager and served in the United States Army during World War I. While in the Army, he competed as a wrestler and after the war became a professional wrestler.

He moved to Amarillo, Texas in 1923 and took over a tire shop.

In 1934, he started the Maverick Boys Club, an after-school program for boys in Amarillo. Lee Bivins' widow, Mary Elizabeth Bivins, donated the location at 313 Van Buren, and the land at Third and Grant for a new building in 1937. Julian Bivins, son of Lee and Mary, donated the Tascosa, Texas, town site, the renovated courthouse he had been using as a summer home, and the surrounding 120 acres to the cause. In 1939, Cal Farley's Boys Ranch (now a census-designated place with its own United States Post Office) opened as a home for troubled youth.[1]

In 1945, Mr. Farley also founded Kids, Incorporated, an Amarillo youth sports organization. He asked his friend C. C. "Bus" Dugger to help him begin this program and Mr. Dugger became the organization's first coach when he picked up 11 boys at Glenwood Elementary School on the first Monday of 1945 and took them to the Maverick Club to play basketball. Today, the organization serves over 15,000 participants annually in 20-plus sports programs.

Girlstown, U.S.A., founded by Amelia Anthony in 1949 near Whiteface some forty-five miles west of Lubbock was absorbed into the Cal Farley's organization in 1987.

The facilities have a strong spiritual program, with nondenominational Sunday morning chapel services and weekly Bible studies offered. The children are encouraged to participate in music ministry, read scripture, offer prayers, and serve as ushers. Education is provided by Boys Ranch Independent School District. In 1989, the City of Amarillo renamed the Amarillo Civic Center coliseum for him. In 1996, Farley was honored by the United States Postal Service with a Great Americans series 32¢ postage stamp.[2]

In 2017, several former residents of the Ranch came forward to allege serious physical abuse and neglect during their time at the ranch decades before, in some instances long enough ago to have occurred during Mr. Farley's lifetime (but not with his personal involvement). These events purportedly occurred in the 1950s to the 1980s and hence are not currently criminally actionable under Texas law due to the state's statute of limitations, but state authorities are promising that they will be fully investigated and ranch officials continue to offer to pay for counseling and related expenses relating to these events.[3]

Share
Retrieved from "https://en.everybodywiki.com/index.php?title=Cal_Farley&oldid=870843"
Categories:
Hidden categories:
This page was last edited on 19 July 2020, at 16:59.
Content is available under License CC BY-SA 3.0 unless otherwise noted.
This page has been accessed 3,059 times.
Privacy policy
About EverybodyWiki Bios & Wiki
Disclaimers