Cape May Brewing Company (CMBC) is a craft brewery in Cape May County, New Jersey. Opened in July 2011, it grew from a 12-gallon system to a three-vessel, 30-barrel brewhouse. Cape May beers became available at over 700 locations in New Jersey and Pennsylvania.

It has the first microbrewery opened at the Jersey Shore.[6]

It is the first brewery in Cape May County.[5]

On December 1, 2011, the Delaware River and Bay Authority officially opened the tasting room and allowed for tours of the brewery.[5]

Initially, the CMBC began brewing 12 gallons at a time, but gradually expanded.[2] In the first year of operations, the CMBC brewed 62 barrels, or about 1,900 gallons.[7]

In 2012, the council of Lower Township provided a ten-year, low-interest economic development loan as part of its Revolving Loan Fund, the first such loan from the township in nine years. The loan utilized funding from the New Jersey Department of Community Affairs, and was provided to purchase new equipment and for construction costs.[1]

After the loan, the CMBC rebuilt its taproom and expanded its brewing operations.[2] In March 2013, both Ryan Krill and Chris Henke were listed in All About Beer magazine's 30 brewers under 30 years old.[8]

On October 20, 2013, co-owner Ryan Krill presented a TEDx talk at Cape May Convention Hall.[6] At the event, Krill described the social effects of beer and the company's production process, including its use of local ingredients.[9]

In 2014, the brewery began brewing sour beer; due to the potential for yeast infecting other beers during the brewing process, CMBC built a separate production line for sours.[10]

The brewery was the third-largest craft brewery in New Jersey by 2015, brewing about 6,000 barrels that year.[11]

That year, the CMBC further expanded into a nearby warehouse, adding a new brewhouse, bottling line, and tap room, at the cost of $500,000 (USD).[12]

In May of that year, the company dedicated the new brewhouse, capable of expanding their yearly production to 15,000 barrels.[13]

In August 2015, the CMBC brewed a beer commemorating Pope Francis's visit to Philadelphia called YOPO, short for You Only Pope Once.[14] Also in 2015, CMBC President Ryan Krill was elected President of the Garden State Craft Brewers Guild.[15]

In February 2018, CMBC joined eight other breweries to form the Brewers Guild of New Jersey, representing the largest breweries in the state and 75% of the state's craft beer sales. The company split from the Garden State Craft Brewers Guild, making New Jersey the only state with multiple statewide craft beer associations.[16]

Due to a change in brewery laws in 2012, CMBC became able to sell pints in conjunction with brewery tours; theretofore, they had only been able to provide samples in the form of 4-ounce pours. The brewery generates some of its revenue on-premises from selling beer in growlers, or 64 US fl oz (1.9 l) reusable glass containers.[17]

By 2018, CMBC's beers were available in over 700 locations throughout New Jersey and southeastern Pennsylvania.[18]

In 2015, the brewery's Honey Porter became certified "Jersey Fresh", a label associated with the New Jersey Department of Agriculture for products grown in the state. It was the first beer in the state with the label, using locally-sourced honey.[20][21]

A year later, the brewery launched Beets by May, becoming its second beer to be labeled "Jersey Fresh", using beets from Formisano Farms in Buena.[22] 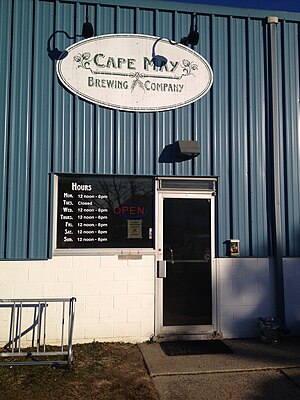 View of the brewery from the outside

At the 2012 Atlantic City Beer Festival, the CMBC won the award for Best India Pale Ale (IPA) with its Centennial IPA.[23] In 2012, the company won both the "New Business Venture Award" and the "Conservation Award" from the Cape May County Chamber of Commerce.[24][25]

In 2015, CMBC's Sawyer’s Swap barley wine ale received a silver medal from the US Open Beer Championship, based in Ohio, in the aged beer category.[26] And at the Best of Craft Beer Awards, based in Oregon, their Coastal Evacuation brew received a silver medal in the category of Imperial IPA, and the Tower 23 earned a silver in the Berliner Weisse category. The Devil's Reach won a bronze in the Belgian Gold Strong Ale class.[27] At the World Beer Championships, CMBC received a silver medal for Devil's Reach, and a bronze for another Belgian-style brew, the Tripel Wreck.[28] In a different iteration of the same competition, also in 2015, CMBC received a bronze medal for the South Jersey Secession Session Scottish Ale; silvers for the Mop Water Ale, Biscuits and Honey ESB, and Coastal Evacuation Double IPA; and a gold for the Blonde Ale.[29] Cape May Brewing Company received the People's Choice Award from the Atlantic City Beer and Music Festival.[30] President Ryan Krill was named a winner in the 2015 NJBIZ Forty Under 40 awards program.[31]

2016 saw many awards given to the brewery as a whole rather than to any specific beer. Cape May Brewing Company was once again named People's Choice at the Atlantic City Beer and Music Festival, NJBIZ named the organization Emerging Business of the Year, and NJMEP named the company Start-Up Manufacturer of the year. [32]

The following year saw the brewery named People's Choice at the Atlantic City Beer and Music Festival for the third year, as well as People's Choice for Best New Jersey Brewery, and a third-place award for their Double IPA, White Caps. Their Honey Porter received a silver medal from the National Honey Board. CTM Media group awarded the company a Best Brochure award, the Lower Township Chamber of Commerce gave the brewery an Excellence in Business award, and CapeMay.com named Cape May Brewing Company Best Brewery. In addition, The Topsail received a gold medal in the Wood/Barrel-Aged Sour category by the US Open Beer Championships.[32]

In January 2018, the brewery received BeerConnoisseur's Beer of the Year, given to The Topsail. Another in their Barrel Aged Series, The Scupper, took the #2 spot on the magazine's Top 10 American Wild Ales of 2017. White Caps Double IPA came in at #3 on the magazine's list of Top 5 Double IPAs of 2017 and #4 on their list of Top 10 IPAs of 2017. Their Christmas offering, Boughs of Barley (2016) was listed at #55 on their Top 100 Rated Beers of 2017. These honors resulted in BeerConnoisseur naming Cape May Brewing Company the Second Runner-up for Best Brewery of 2017.[33]

In addition, 2018 saw the Beer Army Beer Wars honor Cape May Brewing Company's Phantom Crew with a bronze medal in the Flanders Red Ale categoryand Higbee a silver in the Mixed Fermentation Sour Beer category. Their 2017 iteration of their holiday brew, Boughs of Barley, was honored with Best of the Mid-Atlantic Region in the Non-Whiskey Barrel-Aged Beer category.[32]

Retrieved from "https://en.everybodywiki.com/index.php?title=Cape_May_Brewing_Company&oldid=1709359"
Hidden categories:
This page was last edited on 11 May 2021, at 02:28.
This page has been accessed 739 times.
Content is available under License CC BY-SA 3.0 unless otherwise noted.
Privacy policy
About EverybodyWiki Bios & Wiki
Disclaimers