Carlos Drummond de Andrade (October 31, 1902 – August 17, 1987) was a Brazilian poet and writer, considered by some as the greatest Brazilian poet of all time.[1] He has become something of a national cultural symbol in Brazil, where his widely influential poem "Canção Amiga" ("Friendly Song") has been featured on the 50-cruzado novo bill.

Drummond was born in Itabira, a mining village in Minas Gerais in the southeastern region of Brazil. His parents were farmers belonging to old Brazilian families of mainly Portuguese origin.[2][3] He went to a school of pharmacy in Belo Horizonte, but never worked as a pharmacist after graduation, as he did not enjoy the career he chose. He worked as a civil servant for most of his life, eventually becoming director of history for the National Historical and Artistic Heritage Service of Brazil. Though his earliest poems are formal and satirical, Drummond quickly adopted the new forms of Brazilian modernism that were evolving in the 1920s, incited by the work of Mário de Andrade (to whom he was not related). He would mingle speech fluent in elegance and derive truth about his surroundings, many times describing quotidian, normal aspects of life while achieving a fluidity of thought and speech. Drummond drifted towards communism at the start of World War II and took up the editorship of the Brazilian Communist Party's official newspaper, Tribuna Popular, but later abandoned the post due to disagreements over censorship, which Drummond staunchly opposed.[4]

Drummond's work is generally divided into several segments, which appear very markedly in each of his books. But this is somewhat misleading, since even in the midst of his everyday poems or his socialist, politicized poems, there appear creations which can be easily incorporated into his later metaphysical canon, and none of these styles is completely free of the others. There is surely much metaphysical content in even his most political poems.[citation needed][dubious – discuss] 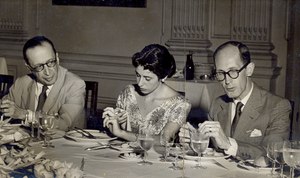 The most prominent of these later metaphysical poems is A Máquina do Mundo (The World's Machine). The poem deals with an anti-Faust referred to in the first person, who receives the visit of the aforementioned Machine, which stands for all possible knowledge, and the sum of the answers for all the questions which afflict men; in highly dramatic and baroque versification the poem develops only for the anonymous subject to decline the offer of endless knowledge and proceed his gloomy path in the solitary road. It takes the renaissance allegory of the Machine of the World from Portugal's most esteemed poet, Luís de Camões, more precisely, from a canto at the end of his epic masterpiece Os Lusíadas. 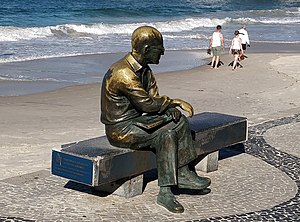 Drummond is a favorite of American poets, a number of whom, including Mark Strand and Lloyd Schwartz, have translated his work. Later writers and critics have sometimes credited his relationship with Elizabeth Bishop, his first English language translator, as influential for his American reception, but though she admired him Bishop claimed she barely even knew him. In an interview with George Starbuck in 1977, she said, "I didn't know him at all. He's supposed to be very shy. I'm supposed to be very shy. We've met once — on the sidewalk at night. We had just come out of the same restaurant, and he kissed my hand politely when we were introduced."[5] 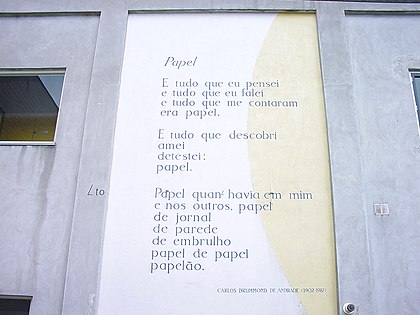 Poem by Drummond de Andrade on a wall in Leiden

Drummond, as a writer of the modernist style, follows the writing mechanic proposed by Mário de Andrade and Oswald de Andrade; making use of free verse, and not depending on a fixed meter. In modernism, the predominant style which Drummond wrote in, styles were divided into lyrical and subjective or objective and concrete, Drummond would be part of the latter, similar to Oswald de Andrade.[citation needed]

Drummond was the first poet to assert himself after the premiere modernist of Brazil and created a unique style dominated by his writing. His work displays linguistic freedom and free verse. But it goes beyond that: "The work of Drummond reaches – as Fernando Pessoa, Jorge de Lima, Murilo Mendes and Herberto Helder – a coefficient of loneliness that detached from the soil of history, leading the reader to an attitude free of references, trademarks or ideological or prospective," said Alfredo Bosi (1994).[citation needed]

His poetry, according to Affonso Romano de Sant'Anna, can be divided into three parts:

Retrieved from "https://en.everybodywiki.com/index.php?title=Carlos_Drummond_de_Andrade&oldid=828752"
Categories:
Hidden categories:
This page was last edited on 28 June 2020, at 03:00.
This page has been accessed 193 times.
Content is available under License CC BY-SA 3.0 unless otherwise noted.
Privacy policy
About EverybodyWiki Bios & Wiki
Disclaimers