Effects of Cyclone Fani in Odisha

The effects of Cyclone Fani in India were extensive and historic. Cyclone Fani was the strongest cyclone in the Bay of Bengal during the 2019 North Indian Ocean cyclone season, and the strongest cyclone ever to hit the state of Odisha since the 1999 Odisha Cyclone. It made landfall in Odisha with 155 mph winds. Within India, the storm killed 74 people, and caused $8 billion in damage. Fani produced extremely high winds that ripped roofs off houses and uprooted trees, and storm surges of 5 ft (1.5 m)[1] in places like Puri, Odisha.[1] 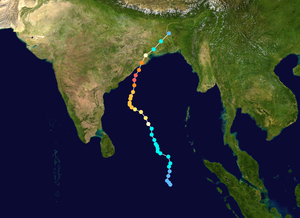 The IMD began tracking a depression located to the west of Sumatra on 26 April, classifying it as BOB 02. Later that day, the Joint Typhoon Warning Center (JTWC) issued a Tropical Cyclone Formation Alert on the system.[2]

Afterward, the storm slowly coalesced while moving northward, and was upgraded to a deep depression at 00:00 UTC on 27 April.[1]

At the same time, the JTWC began warning on the system, designating it 01B.[3]

The system continued to intensify until 18:00 UTC on 27 April, after which it stagnated for over a day, as convection around the storm's center waxed and waned.[1] Fani resumed strengthening around 12:00 UTC, with the IMD upgrading it to a severe cyclonic storm.[1] At that time, Fani began a period of rapid intensification as it was located within a very favorable environment with sea surface temperatures of 30–31 °C (86–88 °F) and low vertical wind shear. As a result, the JTWC upgraded Fani to a Category 1-equivalent cyclone late on 29 April.[4] Around 00:00 UTC on 30 April, Fani was upgraded to a very severe cyclonic storm by the IMD.[1] The organization of the system continued to improve, with tight spiral banding wrapping into a formative eye feature,[5] resulting in Fani being upgraded to an extremely severe cyclonic storm by the IMD around 12:00 UTC[1] while the JTWC upgraded the storm to a Category 3-equivalent cyclone hours later.[6] Development proceeded more slowly over the following days, with little improvement evident in the system's satellite presentation. On 2 May, however, the central dense overcast became more symmetrical and the eye more distinct, and Fani was upgraded to a Category 4-equivalent cyclone by the JTWC at 06:00 UTC.[7] Shortly after, Fani started another period of rapid intensification, attaining 1-minute sustained winds of 280 km/h (175 mph), equivalent to a Category 5 hurricane, according to the JTWC.[8] Operationally, the JTWC classified the system as a high-end Category 4-equivalent tropical cyclone with 1-minute sustained winds of 250 km/h (155 mph),[9] but raised their estimate in post-season reanalysis.

Fani quickly weakened after peak intensity. At 8:00 a.m. IST (02:30 UTC) 3 May, Fani made landfall near Puri, Odisha as an extremely severe cyclonic storm, with 3-minute sustained winds of 185 km/h (115 mph) and 1-minute sustained winds of 250 km/h(155 mph).[10] Land interaction quickly degraded Fani's convective structure; and it weakened to a Category 1-equivalent tropical cyclone soon after landfall.[11] Fani continued to weaken after landfall, weakening to a cyclonic storm later that day,[1] before passing just north of Kolkata. On 4 May, Fani weakened to a deep depression and moved into Bangladesh,[1] before degenerating into a well-marked low later on the same day.[1] On 5 May, Fani's remnant low dissipated over Bhutan.

As Fani became a threat to India, preparations were immediately in effect. A record 1.2m people (equal to the population of Mauritius) were evacuated in less than 48 hours[12]. This mammoth exercise involved more than 45,000 volunteers.[13] Over 800 shelter were opened and handed out 100,000 dry-food packets to those who planned to stay during the cyclone.[14] Officials have acquired is an Early Warning Dissemination System project that addresses the existing gap in disseminating disaster warning up to the community level.[15] Naval warships and helicopters stoodby throughout the storm with medical teams and relief materials. The country's National Disaster Response Force (NDRF) also deployed several teams there.[16]

In preparation for the storm's impact, the state government of Odisha and its agency OSDMA evacuated over 1.2 million residents from vulnerable coastal areas and moved them to higher ground and into cyclone shelters built a few kilometres inland. The authorities deployed around a thousand emergency workers and 43,000 volunteers in these efforts. It sent out 2.6 million text messages to warn of the storm in addition to using television, sirens and public-address systems to communicate the message. About 7,000 kitchens were operated to feed evacuees in 9,000 storm shelters.[17][18][13] The Odisha government staged "300 power boats, two helicopters and many chain saws, to cut downed trees" for the purpose.[18]

Approximately 74 people have been killed by Fani in India; 64 in Odisha,[19] In Odisha, a teenager of 14 years was killed after being hit by a falling tree. One woman died when she was hit by flying debris, and another died of a heart attack while in a cyclone shelter.[20] The cyclone adversely affected electricity supply and telecommunication in several coastal areas of Odisha, and to a lesser extent, of West Bengal. Puri and Khordha district in Odisha were the worst hit.[17] The Jagannath Temple in Puri suffered minor damage, the repairing cost were estimated to be ₹51 million (US$738,000).[21] The KIIT University also suffered a damage of about ₹300 million (US$4.3 million).[22] Total damage in Odisha were estimated at ₹120 billion (US$1.74 billion), mostly in property damage and the relief.[23] 556,000 houses and huts were damaged, 6,281 cattle were lost, 148,663 hectare of crop land was affected and 6,416 boats & 8,828 nets were damaged.[1] In addition, infrastructure like roads, power, railway, telecommunications etc. were also damaged in Odisha.[1] Close to 90% of the fishing boats and nets have been severely damaged in the Satapada area of the Chilika outer channel.[24] The kuccha houses were almost completely damaged and semi-pucca houses lost their roofs along the track of the storm.[24] The household items and stored agricultural produce were also badly damaged.[24] Besides fisheries, the agricultural, horticultural crops like mango, cashew and plantation crops like coconuts were also hard hit.[24] The cyclone has also damaged the agricultural land in the coastal areas.[24] According to the state government's preliminary assessment, more than 30 per cent of crops has been damaged in Odisha due the cyclone.[24]

The European Union allocated 15.5 million INR (EUR 200 000) to provide emergency assistance to the most affected communities.[25] The aid directly benefited 25 000 people in the states of Odisha, Andhra Pradesh and West Bengal.[25] Priority was given to Odisha’s districts of Cuttack, Puri, and Bhubaneswar, which were amongst the hardest-hit localities.[25]

The EU funding supports the Indian Red Cross Society (IRCS) in delivering life-saving support to the most vulnerable families. This includes the distribution of emergency shelter material and relief items such as tarpaulins, mosquito nets, blankets, kitchen sets, buckets and clothing.[25] In addition, technical support was provided on improved shelter design and building techniques, thereby reinforcing the safety of affected families and contributing to the longer-term recovery effort.[25] In order to reduce the risk to public health in the aftermath of the storm, epidemic prevention and control activities was also carried out.[25] Special attention was paid to people with high vulnerabilities such as those with disabilities and marginalised groups.[25]

The funding is part of the EU’s overall contribution to the Disaster Relief Emergency Fund (DREF) of the International Federation of Red Cross and Red Crescent Societies (IFRC).[25]

Domestically, Odisha required ₹170 billion (US$2.46 billion) for rebuilding the infrastructure.[26] Indian Prime Minister Narendra Modi announced that the government had released over ₹10 billion (US$145 million) for the states affected by Fani.[27] There were massive environmental devastation, as well.[28]

Other articles of the topics Tropical cyclones AND India  : Effects of Cyclone Amphan in India

Retrieved from "https://en.everybodywiki.com/index.php?title=Effects_of_Cyclone_Fani_in_Odisha&oldid=1297016"
Category:
Hidden categories:
This page was last edited on 1 February 2021, at 11:13.
This page has been accessed 193 times.
Content is available under License CC BY-SA 3.0 unless otherwise noted.
Privacy policy
About EverybodyWiki Bios & Wiki
Disclaimers