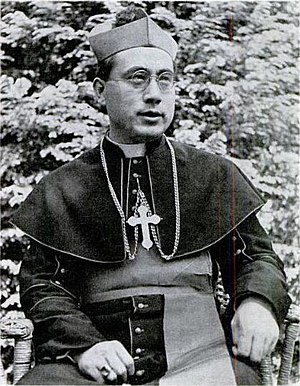 The original Fu Jen School refers to the historical and philosophical school developed during the Beijing period (1925~1951) of Fu Jen Catholic University. The initial purpose was to resist the New Culture Movement and anti-traditional Chinese ethics advocated by Peking University. The main scholars are represented by Chen Yuan, Yu Jiaxi (zh), Chou Tsu-mo (zh), Qigong and others.[2]

After Fu Jen was re-founded in Taiwan in 1961, Paul Yú Pin, the first Fu Jen president, formulated a new university motto "Truth, Goodness, Beauty, Sanctity" and started the earliest graduate institute of philosophy in Taiwan, making the Fu Jen Philosophy Department the only center of Scholasticism in Taiwan. He developed a set of philosophical theories centered on "Three Kinds of Knowing" (三知論) and gradually became a school in the sixty years after WWII.[3][4]

Since Bernard Li became the new Fu Jen president in 2004, he has integrated these philosophical researchers and their achievements, which is officially called "Fu Jen School". Based on Fu Jen Philosophy Department and Religion Studies Department, together with Fu Jen alumni and Catholic scholars who teach in other top universities in Taiwan (such as National Taiwan University and National Central University), Fu Jen school has become one of the main philosophical schools in the Far East.[5]

Retrieved from "https://en.everybodywiki.com/index.php?title=Fu_Jen_School&oldid=1782093"
Hidden categories:
This page was last edited on 27 June 2021, at 11:34.
This page has been accessed 52 times.
Content is available under License CC BY-SA 3.0 unless otherwise noted.
Privacy policy
About EverybodyWiki Bios & Wiki
Disclaimers