UN is constant warning about apocalypse of food produce that population have more than 9 billion in the world, so facing severe food shortages and reduced crop yields due to global warming, extreme weather and new pests. In this context, various alternative food development researches such as insect feeding, pearling development and GMO development are under way as solutions for future food shortages, and GMOs are especially regarded as the most realistic alternative.[1][2]

The world needs more food due to population growth, but food is being depleted worldwide. The biggest cause is global climate change. Climate change due to rising temperatures reduces the world's arable land and increasing salinisation lowers the fertility of the land. In the long run, the land will dry up and the area of grassland will decrease. The fact that two crops of rice and wheat account for about half of world food is a danger and Growing meat demand is also a problem. By 2030, the demand for hard food will increase to 1 billion tons. in this case, we have to cover additional 300 million tons of grain.If this can not be resolved, there will be an outrageous food crisis in which the food of the livestock compete with the poor. In addition, various factors such as soil erosion due to wind erosion, water shortage, population increase, and the risk of industrial breeding are factors of 'food disturbance'.[3][4]

Although the global food crisis is a political issue, politicians has been avoiding answers to it. It is also the United Nations. There is no master plan to overcome the 'long-term failure' of world food. In fact, referring to the case of Korea, the end of year in 2010, the price of vegetables has skyrocketed due to the rainstorms for several days, and the fish species on the East Coast of South Korea have changed drastically. However, the problem of the world food crisis, which is controversial, has been unfavorable to mankind at this moment.[5][6] 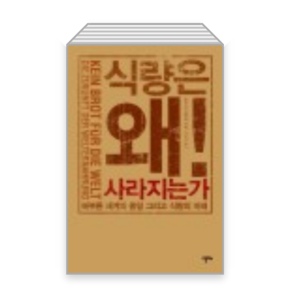 Cause of food changes[edit]

Of course the strongest force is climate change. Climate change is affecting global influence and can not be restrained. The position of the climate zone is changing. The rain continues to move northward. The extreme climate situation threatens to threaten crops. Due to rising global temperatures, many areas of Asia and Africa are in danger of falling steadily. Global warming decreases even if temperatures rise by about 2 degrees Celsius. If temperatures rise more than this, the crops in Africa, Asia and South America will reach 40 percent. The price of grain will rise by about one-third.[7]

The problem begins with the soil. Soil is eroded by wind and water erosion, and is sacrificed by increasing salt. This is because there is a growing number of arable land that can only be cultivated through artificial irrigation. This means that the per capita food area is shrinking in terms of the growing number of people in the world. According to experts, the per capita area should be at least 1,400 square meters. There are already many developing nations that are already below this limit. The area will taper off further.[8]

The world's 42 countries have a lavish lifestyle compared to their situation in water matters. It will become a global water dispute zone in the future. Along with West Asia, India and China are also part of this region. Eighty percent of water reserves disappear from irrigated irrigation fields. Most of them penetrate themselves into the floor, unable to write because of antiquated coffins. Only 10 percent of the crops are actually used.[9]

In particular, water is needed to grow high-performance crops. High performance crops rely heavily on water. The improvement of these crops is not yet finished. The World Seed Concerns want the world to become more sophisticated in the world. The negative aspects of the victory of a high performance crop are the gradual disappearance of species and breeds. These days, wheat and rice and these two crops contribute to the world's food supply. More and more varieties are disappearing within a single species. Diversity, which means a portion of food safety, is being lost in arable land. In the case of rice and wheat, 80 percent of the local species have already vanished.[10]

The appetite for meat will grow further. Food production agencies say the annual consumption of meat per person is expected to increase to 45 kilograms by 2030. For this reason, it needs to grow 3.49 million cows, 600 million sheep and goats, 1.49 million pigs, and more than twice as much as fish. This growth rate is only possible through mass breeding, which uses lots of grains. One billion tons of grain needs to be added by 2030, but there is no answer to where to farm so many grains. In other words, it means less use of human food.[11]

Biomaryography is becoming more acute for biofuels. As oil prices rise, bio fuels will absorb more and more materials in the food market, and more and more farmland will be moved from the food market to the energy market. Experts predict that by 2030, 58 million hectares of arable land will be used to grow crops in the world. Thus, competition between tanks and plates that result in unfortunate consequences is inevitable. Increasing energy prices also lead to synergy along with the price curve of the energy market.[12]

A slum of the world's population[edit]

Defilation is compounded by the world's population, which is increasing by nearly two billion by 2030. In the future, the population growth will be entirely in the developing world and in cities. The Global Population Status Report 2008 > 2008 predicts that 3.3 billion people in the world will grow to 5 billion by 2030. By 2030, Asia's population is doubled, and Africa has tripled. Around 2 billion people around the world live in slums, and one-fourth of them are boys under 18. Faced with soaring food prices and rising food prices, 500 million teenagers will be a major threat to the nation's safety and world peace.[13]

In-vitro meat is currently being done only by hand at the University of Maastricht in the Netherlands. However, if in-vitro meat is consumed like regular meat, it will not only be a breakthrough in addressing food shortages, but it will also have positive effects on animal and environmental protection. in-vitro development is expected to help reduce greenhouse gas emissions from growing such an enormous number of livestock, as well as saving water and energy.[14]

Insects are nutritious food. For example, the amount of protein in 100 grams of grasshopper is 70 grams, more than three times that of beef (21 grams). Calcium and iron are also abundant. In addition, the amount of greenhouse gases emitted when insects are raised is only one tenth of that of pigs and other animals.[15][16]

Ahn Geun-mook, the head of the Korea Geothermal Association, said, "Korea has contributed to the increase of food by utilizing groundwater in the 1980s, and since the 21st century, geothermal energy from groundwater has been utilized," he said. "Since there are many underdeveloped countries that rely heavily on groundwater, It is necessary to start from solving the local water problems such as the development of the ground water equipment. "

"We should also study how to carry out the research by participating in the urban planning research such as the construction of the carbon neutral city that is currently being carried out," Duk-Sung Oh, the president of Chung-Nam University said. "In addition to the existing water, food and energy, we should also think about building.".[17]

Retrieved from "https://en.everybodywiki.com/index.php?title=Future_of_food&oldid=892466"
Category:
Hidden category:
This page was last edited on 25 July 2020, at 05:09.
This page has been accessed 245 times.
Content is available under License CC BY-SA 3.0 unless otherwise noted.
Privacy policy
About EverybodyWiki Bios & Wiki
Disclaimers