Grewal was born in Ludhiana and his hometown is Koom Kalan, Ludhiana. He did his schooling from Nankana Sahib Public School, Kot Gangu Rai and studied at North India Institute of Hotel Management, Panchkula.[5] His brother Sippy Grewal is a distributor based in Australia.[6] 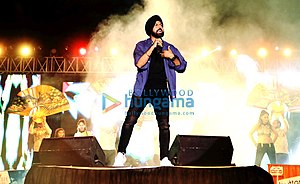 Grewal made his debut with the album Chakkh Lai was produced by Aman Hayer.[9] He followed with the albums Nasha, Phulkari, Phulkari 2 Just Hits and Gangster. His 2012 song "Angreji Beat", featured in the Bollywood film Cocktail. The video for his 2013 single "Hello Hello" was shot in Las Vegas, Nevada. He performed at the Sandwell and Birmingham Mela in 2014.[10] Before his fame though he was a wedding singer. He frequently performed at weddings in Punjab, India. 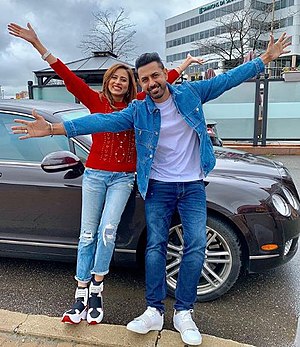 Grewal made his film debut in a supporting role in 2010 Punjabi-language film Mel Karade Rabba. He followed that up with a lead role in Jihne Mera Dil Luteya which became the biggest hit in Punjabi cinema when it released.[11] In April 2012 his film Mirza – The Untold Story released with the highest opening for a Punjabi film at the time.[12]

His next movie Carry On Jatta released in July 2012 and had the second highest opening and total collections for Punjabi film.[13] In 2013, Grewal released the action film Singh vs Kaur, comedy film Lucky Di Unlucky Story and Best of Luck and the comedy movie Bhaji in Problem.

In 2014, he appeared in the dramatic thriller Jatt James Bond. His second film of 2014 was the comedy film Double Di Trouble.

He dubbed a voice in the Punjabi version of A Good Day to Die Hard which was the first Hollywood movie to be dubbed in Punjabi.[14]

In 2015, Grewal entered Bollywood with a guest appearance in the comedy-drama film Dharam Sankat Mein. He then made his full acting debut in Bollywood with the romantic-comedy film Second Hand Husband.

In September 2017 Gippy Grewal starred in his most recent Hindi movie, Lucknow Central, along with Farhan Akhtar.[15] Carry on Jatta 2 released on 1 June 2018.

Share
Retrieved from "https://en.everybodywiki.com/index.php?title=Gippy_Grewal&oldid=819968"
Categories:
Hidden categories:
This page was last edited on 19 June 2020, at 16:07.
Content is available under License CC BY-SA 3.0 unless otherwise noted.
This page has been accessed 1,826 times.
Privacy policy
About EverybodyWiki Bios & Wiki
Disclaimers