Chittagong Government Madrasah's Anglo-Persian Department was split off to form the school in 1909. Originally it operated out of part of the local Registration Office building.[2] The school opened at first with madrasah and Bengali departments. The first headmaster, from 1910 to 1915, was Khan Shaheb Wahaidun Nabi.[citation needed] It moved to a permanent site in 1916, and was renamed Chittagong Government Muslim High School.[2] In 1953, the Urdu department was also established. In 1970 the school expanded into a new building. There was also a small mosque, which was subsequently enlarged. In 2005 the government established another two buildings, a science lab building and an administration building.[citation needed] 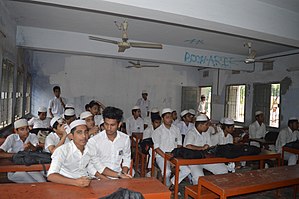 The school also has a hostel a headmaster's cottage. In front of the school building, there is a large playground. The school has a library which contains more than 2000 books.

Retrieved from "https://en.everybodywiki.com/index.php?title=Govt._Muslim_High_School&oldid=959207"
Categories:
Hidden categories:
This page was last edited on 16 August 2020, at 19:45.
This page has been accessed 100 times.
Content is available under License CC BY-SA 3.0 unless otherwise noted.
Privacy policy
About EverybodyWiki Bios & Wiki
Disclaimers
Mobile view