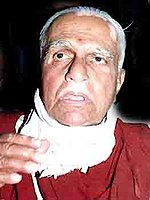 H. V. Sheshadri (हो वे शेषाद्रि , 1926 - 2005) was an Indian author and social activist. He was one of the most significant leaders of the Hindu nationalist Rashtriya Swayamsevak Sangh.[1]

He joined RSS in 1946 and rose through the ranks. [2] Like most RSS pracharak-s, he was a lifelong bachelor. He was present in Ayodhya when Babri Masjid was demolished on 6 December 1992, and made repeated appeals through the public speaking system that the agitated activists should leave the place. [3]

During Rajju Bhaiya's reign as the RSS Chief, from 1994 to 2000, Seshadri was the second in command, called Sar-kaaryawaaha. When Rajju Bhaiya (real name - Rajendra Singh Thakur) stepped down due to ill-health in March 2000, he suggested that Seshadri take over from him. But Seshadri refused, since he himself was not keeping good health. [4] K S Sudarshan replaced Rajju Bhayya as Sarasanghachaalaka (RSS Chief) and Mohan Bhagwat replaced Seshadri as Sarkaryavah.

Sheshadri's association with RSS continued till the very end, as a senior advisor. He died in Bangalore in 2005 due to old age. [2] He was a prolific wrtiter who wrote both in Kannada and English. His major works tried to give explanations to Hindu nationalism. Yugavatara( life of Shivaji Maharaj), The Tragic Story of Partition, RSS Vision in Action, Hedgewar Epoch Maker are his important books.

Share
Retrieved from "https://en.everybodywiki.com/index.php?title=H._V._Sheshadri&oldid=1326670"
Categories:
Hidden categories:
This page was last edited on 7 February 2021, at 08:28.
Content is available under License CC BY-SA 3.0 unless otherwise noted.
This page has been accessed 724 times.
Privacy policy
About EverybodyWiki Bios & Wiki
Disclaimers