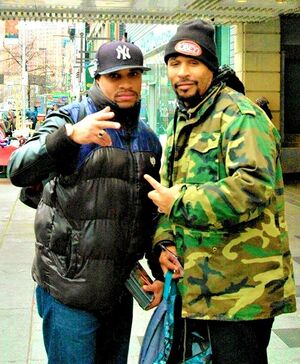 Harlem 6 is a Musical Movement of Change for all Man, Woman and Child of all races, colors and creeds.

The band's name comes from a true story. A group of six young African-American and Hispanic teenage men from the 1960s who were wrongly accused of heavy crimes that took place on 125th Street and Madison Avenue in Harlem, New York, two of whom were murdered without evidence to support the charges. The media gave the group the name The Harlem Six, and the name is still used today in memory of the six young men.[1]

Everything about "The Harlem 6" is awe inspiring. If you met a member of "The 6" in person he'd definitely offer you words of encouragement and guidance and possibly even enlightened wisdom. Truly a wonder and a marvel to hip-hop today. They vow to restore the condition of hip-hop back to a more traditional form. They have said "Hip-Hop is in a state of emergency" This was most likely because "Harlem 6" is for the children" and the group is an affiliate. Kids can't be raised off sex, drugs and violence. That is not the way. The very courageous aspirations of the 6 is to, one day, take the hip-hop world by storm and show every soul that hears it that they have worth and value as a human being. There's hope in the ghetto but its spelled "community". The Harlem 6 will be travelling across the United States to communities in need to give seminars on the realities of gangsterism and building positive, healthy communities.

A.G.R. "The R&B God" is the leader of Harlem 6 alongside his loyal brother Black Jesus. Their given names at birth (Agodrulallah & Isa Kundalini) represent the living God and the divine knowledge that will be used to achieve destiny everlasting. Both A.G.R And Black Jesus have testified they will change the game (Hip-Hop) forever overcoming and destroying any forces that seek to hinder the path.

In earlier times Black Jesus was blessed by MC NEW YORK with his rap name. For those of you who don't know, MC NEW YORK is also known as 2Pac. So, then, it is understandable that great honor is always with him. Black Jesus has released 2 solo albums "The Greatest Story Never Told" & "Gods Of War Pt. 1 With Don Kundalini". His debut album had a very special guest appearance from the world renowned "Gifted Unlimited Rhymes Universal" a.k.a "Guru" Of Gangstarr. Black Jesus has a third album in its creative stages entitled "Karma Enigma". Black Jesus also starred in a film called "Black, White And Red All Over". This film was viewed at the Sundance Film Festival. Known for helping out around the community Black Jesus is an important person in his neighborhood. He stands for diversity always. Very knowledgeable in all things related to black history. Musically he pours out his understandings of a sometimes hard to understand situation or problem to bring light to it. You can grasp this if you choose to view his Video he did with Jazy T.V. It is called "Black Jesus - The American"

The 2 original members of who are also brothers of "Harlem 6" are AGR and Black Jesus .

These 2 have symbolized Harlem 6 since day 1. Based out of Hip-hops cradle - New York City. These outstandingly talented artists have made their mark already! Debuting in 2001 with the album entitled "Mixtape Conquer Volume 1" which was hosted by the Grand-master of Wu-tang...yes.. by RZA. The video to the hit single "Ode To The Wu" had aired on worldwide television (MTV). The song is also available for play in many Juke-Boxes all across North America. Keeping true to the debut album title (Mixtape Conquer) the Harlem 6 went on to sell over 1,000,000 CD's but not out of stores! They sold 1,000,000 Albums HAND TO HAND! These members are the 4 who are continuing the legacy of the original "Harlem Six" A.k.a "The Blood Brothers" who were wrongfully accused of murder in 1964. The Harlem Six from the 1960s are the fore-fathers of the 5 percent nation (Gods And Earths) which is an esoteric gnosis of the Holy Quran. The Original Harlem 6 from the 1960s were known as "The God Fathers Of Supreme Mathematics" because of this gnosis. Apparently they also ran covert operations where they would rough up the scumbag neighborhood drug dealers in efforts to keep the community healthy and a safe place to play for the kids. The 6 in "Harlem 6" is always red or white to denote the innocence of the six and the innocent blood that was spilled that day in April 1964. The Harlem 6 are here with purpose. From the eldest members of the Group originating in the 1960s down to the younger members of today's times.

A.G.R. "The R&B God" grew up in the Bronx of New York. Even at a young age he knew he would be a star. He is the C.E.O Of "Entaprise Entertainment LLC" which is the record label he operates. In "The 6's" tireless efforts to earn the recognition they were entitled to, A.G.R. successfully struck a deal with Universal Records And Mi5/Wrom Records. In the process AGR & "The 6" were able to turn the heads of big media such as "Hip-Hop Illustrated Magazine"

from the NBA & NFL like Lebron James, Kobe Bryant and Peyton Manning took notice to "The Harlem 6 Movement" on twitter. A.G.R. is "relentless when it comes to the grind". Over the last 15 years him and his brother Lord Harrison have sold well over a million copies, he has sold about 70,000 copies of his debut solo album entitled "King Of The Industry". He has claims to being "The King Of The Industry" because his flawless hustle and determined mindset always puts him a cut above the rest. He takes the throne

This article "Harlem 6" is from Wikipedia. The list of its authors can be seen in its historical and/or the page Edithistory:Harlem 6. Articles copied from Draft Namespace on Wikipedia could be seen on the Draft Namespace of Wikipedia and not main one.

Retrieved from "https://en.everybodywiki.com/index.php?title=Harlem_6&oldid=1498982"
Categories:
Hidden categories:
This page was last edited on 22 March 2021, at 00:13.
This page has been accessed 1,638 times.
Content is available under License CC BY-SA 3.0 unless otherwise noted.
Privacy policy
About EverybodyWiki Bios & Wiki
Disclaimers
Mobile view