The Hejaz (/hiːˈdʒæz, hɪˈ-/, also US: /hɛˈ-/; Arabic: ٱلْحِجَاز‎, romanized: al-Ḥijāz, lit. 'the Barrier', Hejazi pronunciation: [alħɪˈdʒaːz]) is a region in the west of Saudi Arabia. It includes the cities of Mecca, Medina, Jeddah, Tabuk, Yanbu and Taif. It is also known as the "Western Province" in Saudi Arabia.[1] It is bordered in the west by the Red Sea, in the north by Jordan, in the east by the Najd, and in the south by the 'Asir Region.[2] Its largest city is Jeddah, the second largest city in Saudi Arabia, with Mecca and Medina being the fourth and fifth largest cities respectively in the country. The Hejaz is the most cosmopolitan region in the Arabian Peninsula.[3]

The Hejaz is significant for being the location of the Islamic holy cities of Mecca[4] and Medina,[5][6][7] the first and second holiest sites in Islam, respectively. As the site of the two holiest sites in Islam, the Hejaz has significance in the Arab and Islamic historical and political landscape. The region of Hejaz is the most populated region in Saudi Arabia,[8] Arabic is the predominant language as in the rest of Saudi Arabia, with Hejazi Arabic being the most widely spoken dialect in the region. Hejazi Saudis are of ethnically diverse origins.[3]

The region, according to Islamic tradition, is the birthplace of the Islamic prophet Muhammad, who was born in Mecca, which is locally considered to have been founded by the Islamic prophets and matriarch Abraham, Hagar and Ishmael.[9][10] The area became part of his empire through the early Muslim conquests, and it formed part of successive caliphates, first the Rashidun Caliphate, followed by the Umayyad Caliphate, and finally the Abbasid Caliphate. The Ottoman Empire held partial control over the area; after its dissolution, an independent Kingdom of Hejaz existed briefly in 1925 before being conquered by the neighbouring Sultanate of Nejd, creating the Kingdom of Hejaz and Nejd.[11] In September 1932, the Kingdom of Hejaz and Nejd joined the Saudi dominions of Al-Hasa and Qatif, creating the unified Kingdom of Saudi Arabia.[12][13]

The name of the region is derived from a verb ḥajaza (حَجَز), from the Arabic root ḥ-j-z (ح-ج-ز), meaning "to separate,"[14] and it is so called as it separates the land of the Najd in the east from the land of Tihāmah in the west.

The city of Al-'Ula in 2012. The city's archaeological district is in the foreground, with the Hijaz Mountains in the background.

One or possibly two megalithic dolmen have been found in Hejaz.[15]

) and a water source, now dried out, that used to flow 600 miles (970 km) north east to the Persian Gulf via the Wādi Al-Rummah and Wādi Al-Bātin system. Archaeological research led by of Boston University and the University of Qassim indicates that the river system was active and 2500–3000 BCE.[16] 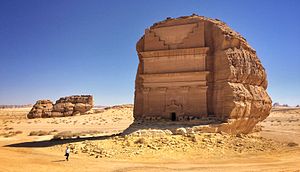 Saudi Arabia's and Hejaz's first World Heritage Site that was recognized by the United Nations Educational, Scientific and Cultural Organization is that of Al-Hijr. The name "Al-Ḥijr" ("The Land of Stones" or "The Rocky Place") occurs in the Qur'an,[18] and the site is known for having structures carved into rocks, similar to Petra.[19][20] Construction of the structures is credited to the people of Thamud. The location is also called "Madā’in Ṣāliḥ" ("Cities of Saleh"),[21][22][23][24][25][26] as it is speculated to be the city in which the Islamic prophet Saleh was sent to the people of Thamud. After the disappearance of Thamud from Mada'in Saleh, it came under the influence of other people, such as the Nabataeans, whose capital was Petra. Later, it would lie in a route used by Muslim Pilgrims going to Mecca.[17][27][28][29]

Era of Abraham and Ishmael[edit]

According to Arab and Islamic sources, the civilization of Mecca started after Ibrāhīm (Abraham) brought his son Ismāʿīl (Ishmael) and wife Hājar (Hagar) here, for the latter two to stay. Some people from the Yemeni tribe of Jurhum settled with them, and Isma'il reportedly married two women, one after divorcing another, at least one of them from this tribe, and helped his father to construct or re-construct the Ka'bah ('Cube'),[30][31][32] which would have social, religious, political and historical implications for the site and region.[9][10]

For example, in Arab or Islamic belief, the tribe of Quraysh would descend from Isma'il ibn Ibrahim, be based in the vicinity of the Ka'bah,[33] and include Muhammad ibn Abdullah ibn Abdul-Muttalib ibn Hashim ibn Abd Manaf. From the Period of Jāhiliyyah ('Ignorance') to the days of Muhammad, the often-warring Arab tribes would cease their hostilities during the time of Pilgrimage, and go on pilgrimage to Mecca, as inspired by Ibrāhim.[32] It was during such an occasion that Muhammad met some Medinans who would allow him to migrate to Medina, to escape persecution by his opponents in Mecca.[34][35][36][37][38][39] 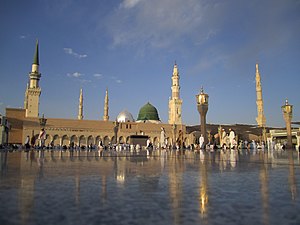 Muhammad's Mosque in Medina, his place-of-residence after the Hijrah (Migration) from Mecca, 2010

As the land of Mecca[4] and Medina,[5][6][7] the Hejaz was where Muhammad was born, and where he founded a Monotheistic Ummah of followers, bore patience with his foes or struggled against them, migrated from one place to another, preached or implemented his beliefs, lived and died. Given that he had both followers and enemies here, a number of battles or expeditions were carried out in this area, like those of Al-Aḥzāb ("The Confederates"), Badr[40] and Ḥunayn. They involved both Meccan companions, such as Hamzah ibn Abdul-Muttalib, Ubaydah ibn al-Harith and Sa`d ibn Abi Waqqas, and Medinan companions.[5][38][39][41][42] The Hejaz fell under Muhammad's influence as he emerged victorious over his opponents, and was thus a part of his empire.[9][34][36][37][43][44][45]

Due to the presence of the two holy cities in the Hejaz, the region was ruled by numerous empires. The Hejaz was at the center of the Rashidun Caliphate, in particular whilst its capital was Medina from 632 to 656 ACE. The region was then under the control of regional powers, such as Egypt and the Ottoman Empire, throughout much of its later history. After the Ottomans lost control of it, Hejaz became an independent state.

On 23 September 1932, the two kingdoms of the Hejaz and Nejd were united as the Kingdom of Saudi Arabia.[47] The day is a national holiday called Saudi National Day.[48]

The cultural setting of Hejaz is greatly influenced by Islamic culture. Hejaz contains Makkah and Madinah where Islam was firstly established. Moreover, Qur’an is considered the constitution of Saudi Arabia and the Islamic law "sharia’" is the main legal source. In Saudi Arabia, Islam is not just adhered politically by the government but also it has a great influence on the people's culture and everyday life.[49][50] The society is in general deeply religious, conservative, traditional, and family-oriented. Many attitudes and traditions are centuries-old, derived from Arab civilization and Islamic heritage.

Hejazi cuisine has mostly Arabian dishes like rest of Saudi Arabia. Grilled meat dishes such as shawarma and kebab are well-known in Hejaz. Some dishes are native to the Hejaz, like Saleeg.[51] The Hejazi dishes are known for their spice.

The region is located along the Red Sea Rift. It is also known for its darker, more volcanic sand. Depending on the previous definition, the Hejaz includes some of the mountains of the Sarat range, which topographically separate the Najd from Tehamah. Bdellium plants are also abundant in the Hejaz. Saudi Arabia, and in particular the Hejaz, is home to more than 2000 dormant volcanoes.[52] Lava fields in the Hejaz, known locally by their Arabic name of ḥarrāt (حَرَّات, singular: ḥarrah (حَرَّة)), form one of Earth's largest alkali basalt regions, covering some 180,000 km2 (69,000 sq mi), an area greater than the state of Missouri.[53] 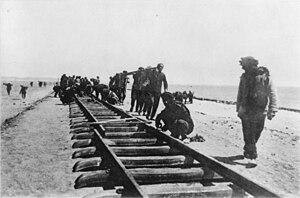 Workers laying tracks for the Hejaz Railway near Tabuk, 1906

), in the northern section of the Hejazi coast. The project will involve "the development of 22 of the 90+ islands"[61] that lie along the coast to create a "fully integrated luxury mixed-use destination."[62] and will be "governed by laws on par with international standards".[63]

The Hejaz is the most populated region in Saudi Arabia,[8] containing 35% of the population of Saudi Arabia.[64] Most people of Hejaz are Sunnis with a Shia minority in the cities of Medina, Mecca and Jeddah. Many consider themselves more cosmopolitan because Hejaz was for centuries a part of the great empires of Islam from the Umayyads to the Ottomans.[65] People of Hejaz, who feel particularly connected to the holy places of Mecca and Medina, have probably the most strongly articulated identity of any regional grouping in Saudi Arabia.[66]

Other articles of the topic Asia : Region 1, East Timor, Saudi Arabia–Turkey proxy conflict, List of Canadians of Asian ancestry, East Asia, Pakistan, Maharashtra, India, P. N. Gadgil Jewellers
Some use of "" in your query was not closed by a matching "".

Retrieved from "https://en.everybodywiki.com/index.php?title=Hejaz&oldid=2054879"
Categories:
Hidden categories:
This page was last edited on 9 September 2021, at 00:37.
This page has been accessed 25 times.
Content is available under License CC BY-SA 3.0 unless otherwise noted.
Privacy policy
About EverybodyWiki Bios & Wiki
Disclaimers