J. Jonah Jameson is a fictional character portrayed by J. K. Simmons in both Sam Raimi's Spider-Man trilogy (2002-07) released by Sony Pictures and in the Marvel Cinematic Universe (MCU) media franchise released by Marvel Studios. He is based on the Marvel Comics character of the same name.

Originally appearing in Spider-Man (2002) and its sequels Spider-Man 2 (2004) and Spider-Man 3 (2007), Simmons’ performance has been universally praised and as a result, he got to voice the character in a video game film tie-in, multiple television series and specials including recurring appearances on Ultimate Spider-Man and a guest appearance on The Simpsons.

The character was later integrated into the Marvel Cinematic Universe and Sony's Spider-Man Universe, with Simmons reprising his role in Spider-Man: Far from Home (2019), Venom: Let There Be Carnage and Spider-Man: No Way Home (both 2021). 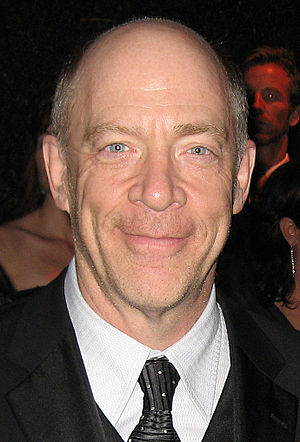 J. Jonah Jameson first premiered as a comic book character in the comic book The Amazing Spider-Man issue #1 (March 1963). Stan Lee stated in an interview on Talk of the Nation that he modeled J. Jonah Jameson as a much grumpier version of himself.[1] Later Spider-Man writers Tom DeFalco and Gerry Conway agreed that J. Jonah Jameson was as close as Lee ever came to a self-portrayal, with Conway elaborating that "just like Stan is a very complex and interesting guy who both has a tremendously charismatic part of himself and is an honestly decent guy who cares about people, he also has this incredible ability to go immediately to shallow. Just, BOOM, right to shallow. And that's Jameson".[2] Conway stated that whenever he wrote Jameson's dialogue, he would hear it in Lee's voice, and on one occasion even wrote a Jameson speech that was almost directly quoted from a Stan Lee speech.[2]

A live-action series, The Amazing Spider-Man featured J. Jonah Jameson as a recurring character first portrayed by David White in the pilot and later portrayed by Robert F. Simon for the remainder of the series. It was produced by Columbia Pictures Television and aired from 1977 to 1979.

In 1998, Sony Pictures Entertainment acquired the film and television rights to Spider-Man also including 900 characters related to the character. It is perpetual provided that Sony releases a new Spider-Man film at least once every 5.75 years.[3] The character was featured in a trilogy of live-action films directed by Sam Raimi with J. K. Simmons portraying the role of J. Jonah Jameson, with installments released from 2002 to 2007. The character served as a major source of comic relief throughout the series. Portrayed as a blustering, bombastic, obsessed, hyperactive man, this version of Jameson retains his dislike for Spider-Man and takes delight in anything that might discredit or defame him, but remains a good man at his core.

In December 2014, following the hacking of Sony Pictures' computers, Sony and Marvel Studios were revealed to have had discussions about allowing Spider-Man to appear in the 2016 Marvel Cinematic Universe film Captain America: Civil War while having control of the film rights remaining with Sony. However, on February 9, 2015, Sony Pictures and Marvel Studios announced that Spider-Man and majority of his supporting characters would appear in the Marvel Cinematic Universe (MCU), with the character appearing in an MCU film and Sony releasing a Spider-Man film co-produced by Marvel Studios president Kevin Feige and Amy Pascal. Sony Pictures would continue to own, finance, distribute, and exercise final creative control over the Spider-Man films.[4]

Simmons briefly reprises his role as a re-imagined version of J. Jonah Jameson in the live-action film Spider-Man: Far From Home.[5] This makes Jameson the first live-action character to be portrayed by the same actor in two different franchises. However, this version of the character is unrelated to the version that Simmons first portrayed in Raimi's trilogy. Instead, this Jameson appears as the host of TheDailyBugle.net, a sensationalist "InfoWars-type video platform."[6] Director Jon Watts noted that Simmons' performance was over-the-top in Raimi's films, but now that same performance has real-world comparisons,[7] such as Alex Jones. According to Feige, the changes in the real world also meant that moving the character from a newspaper editor to a "radical right news journalist that kind of scream[s] in front of the camera" made more sense.[8] Simmons said he and Watts did not see "eye to eye" on the film's contemporary portrayal of the character versus his performance in Raimi's films.[9]

Simmons announced that he has signed on to play Jameson for more films in the MCU.[10]

J. Jonah Jameson is the editor-in-chief of the Daily Bugle, and a personal disliking of the vigilante Spider-Man, considering him a "menace". He hires Peter Parker as a freelance photographer as Parker takes clear photos of the vigilante, and the Bugle's sales keep getting higher due to Spider-Man. Two years later, Jameson admits that Spider-Man is a hero, but refuses to talk openly about it, even admitting to it when Spider-Man disappears. Once the vigilante returns, he recants his statements.

One year later, Jameson sets Eddie Brock and Parker up as rivals to earn a staff job, instructing them to obtain unflattering pictures of Spider-Man. He fires Brock after learning his photo was doctored and destroyed the Bugle's reputation.

In a different reality, Jameson is the executive reporter of the TheDailyBugle.net. In 2024, Jameson is provided a video exposing Spider-Man's identity as Peter Parker and broadcasts it to the entire world, framing Parker for the attack on London, claiming Mysterio as a hero, and Spider-Man as a murderer.

Simmons’ performance as Jameson in both live-action and in animation has been universally praised by both audiences and critics.[11]

Far From Home director Jon Watts explained that they approached Simmons "as late as possible" before the film's release to ask him to reprise his role as J. Jonah Jameson from Sam Raimi's Spider-Man film trilogy, hoping to keep the cameo a surprise for fans.[12] Watts stated that he never considered another actor, saying, "It's gotta be him. Like, if it wasn't him, it wasn't worth doing."[7]

Retrieved from "https://en.everybodywiki.com/index.php?title=J._Jonah_Jameson_(film_character)&oldid=2079148"
Categories:
Hidden categories:
This page was last edited on 22 September 2021, at 09:45.
This page has been accessed 56 times.
Content is available under License CC BY-SA 3.0 unless otherwise noted.
Privacy policy
About EverybodyWiki Bios & Wiki
Disclaimers