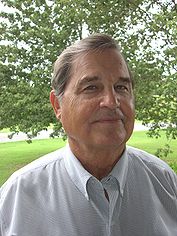 Joe Garner Turman is a Christian author, speaker and retired missionary living in Marshall County, Alabama. He has authored several books including: Buddy, about a boxer in the 1950s and 1960s, and Sling Creek, a novel about the life and activities of a small community in the rural South and how it deals with a murder.

A native of Noonday, Texas, Turman attended Noonday and Tyler schools. He attended Tyler High School where he played football and boxed. Upon graduation, he volunteered for service in the United States Marines.

After receiving an honorable discharge from the USMC, worked in New York City on Fifth Avenue. Underwent a life-changing experience in a conversion at a Billy Graham Crusade in Madison Square Garden.

His education includes a B.A. from Carson-Newman College, in Jefferson City, Tennessee, in English Literature, and a Master of Divinity from Southwestern Seminary in Ft. Worth, Texas.

The field of service for Turman, and his family, was Vietnam. They were evacuated out of Vietnam in April 1975 after serving in that war-torn country for six years. They went on to serve with the International Mission Board of the Southern Baptist Convention in Philippines, Indonesia, Zambia and Slovakia, over a period of thirty years. He speaks Vietnamese, Indonesian and Tonga (Zambia).

He is married to Gloria Ann Reece from Brownsville, Tennessee. Joe and Gloria have four children and six grandchildren. He lives in the Georgia Mountain Community.

Buddy, The Life of Texas Boxing Legend, Buddy Turman, is about a colorful boxing personality from the 1950s and 1960s. The book depicts an era when boxing was "king" in the Southwest. Rex Ross Walker, President of The North American Boxing Federation, said, "Buddy made boxing history in Texas and went on to fight in Manila, Madison Square Garden and in Europe. The book, Buddy, tells of an important period in boxing history in the South." US congressman Ralph Hall also gave his endorsement to the book.

Sling Creek was described by Dr. Walter Nunn, Alabama Book Review Editor, as "adventure fiction at its best." It is in public and school libraries throughout the South including public libraries in Texas, Tennessee, Mississippi, Alabama and Louisiana.

Forty Days to Eternity is a romantic tale wrapped in the historic events of the last days of the Vietnam War. It communicates the love and faith of a young couple and the drama and tension that characterized that time.[2]

Share
Retrieved from "https://en.everybodywiki.com/index.php?title=Joe_Turman&oldid=1168903"
Categories:
Hidden categories:
This page was last edited on 19 December 2020, at 05:13.
Content is available under License CC BY-SA 3.0 unless otherwise noted.
This page has been accessed 403 times.
Privacy policy
About EverybodyWiki Bios & Wiki
Disclaimers