John D. Carmack II[2] (born August 20, 1970) is an American computer programmer, video game developer and engineer. He co-founded id Software. Carmack was the lead programmer of the id video games Commander Keen, Wolfenstein 3D, Doom, Quake, Rage and their sequels. Carmack is best known for his innovations in 3D graphics, such as his Carmack's Reverse algorithm for shadow volumes. In August 2013, Carmack took the position of CTO at Oculus VR.[3]

Carmack was introduced to video games with the 1978 shoot 'em up title Space Invaders in the arcades during a summer vacation as a child. The 1980 maze chase arcade game Pac-Man also left a strong impression on him. He cited Shigeru Miyamoto as the game developer he most admired.[4]

As reported in David Kushner's Masters of Doom, when Carmack was 14, he broke into a school to help a group of children steal Apple II computers. To gain entry to the building, Carmack concocted a sticky substance of thermite mixed with Vaseline that melted through the windows. However, an overweight accomplice struggled to get through the hole, and opened the window, setting off a silent alarm and alerting police. Carmack was arrested, and sent for psychiatric evaluation (the report mentions 'no empathy for other human beings' and describes Carmack as 'a brain on legs'). Carmack was then sentenced to a year in a juvenile home.[5][6]

He attended the University of Missouri–Kansas City for two semesters before withdrawing to work as a freelance programmer.

Softdisk, a computer company in Shreveport, Louisiana, hired Carmack to work on Softdisk G-S (an Apple IIGS publication), introducing him to John Romero and other future key members of id Software such as Adrian Carmack (not related). Later, this team would be placed by Softdisk in charge of a new, but short-lived, bi-monthly game subscription product called Gamer's Edge for the IBM PC (DOS) platform. In 1990, while still at Softdisk, Carmack, Romero, and others created the first of the Commander Keen games, a series that was published by Apogee Software, under the shareware distribution model, from 1991 onwards. Afterwards, Carmack left Softdisk to co-found id Software.

Carmack has pioneered or popularized the use of many techniques in computer graphics, including "adaptive tile refresh" for Commander Keen, raycasting for Hovertank 3-D, Catacomb 3-D, and Wolfenstein 3-D, binary space partitioning which Doom became the first game to use, surface caching which he invented for Quake, Carmack's Reverse (formally known as z-fail stencil shadows) which he devised for Doom 3, and MegaTexture technology, first used in Enemy Territory: Quake Wars. 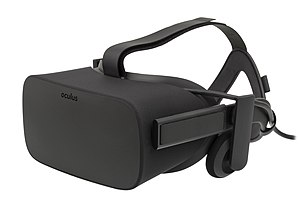 Carmack's engines have also been licensed for use in other influential first-person shooters such as Half-Life, Call of Duty and Medal of Honor. In 2007, when Carmack was on vacation with his wife, he ended up playing some games on his cellphone, and decided he was going to make a "good" mobile game.[7][8]

On August 7, 2013, Carmack joined Oculus VR as their CTO. On November 22, 2013, he resigned from id Software to work full-time at Oculus VR.[1][9] Carmack's reason for leaving was because id's parent company ZeniMax Media didn't want to support Oculus Rift.[10] Carmack's role at both companies later became central to a ZeniMax lawsuit against Oculus parent company Facebook, claiming that Oculus stole ZeniMax's virtual reality intellectual property.[11] The trial jury absolved Carmack of liability, though Oculus and other corporate officers were held liable for trademark, copyright, and contract violations.[12] In February 2017 Carmack sued ZeniMax, claiming the company had refused to pay him the remaining $22.5 million owed him from their purchase of id Software.[13] By October 2018, Carmack stated that he and ZeniMax reached an agreement and that "Zenimax has fully satisfied their obligations to me", ending the suit.[14]

Carmack during the 2005 X PRIZE Cup in Las Cruces and Alamogordo, New Mexico

Around 2000, Carmack became interested in rocketry, a hobby of his youth. Reviewing how much money he was spending on customizing Ferraris,[citation needed] Carmack realized he could do significant work in rocketry and aerospace. He began by giving financial support to a few local amateur groups before starting Armadillo Aerospace. Carmack funded the company out of his own pocket, for "something north of a million dollars a year."[15] The company made steady progress toward their goals of suborbital space flight and eventual orbital vehicles. In October 2008, Armadillo Aerospace competed in a NASA contest known as the Lunar Lander Challenge, winning first place in the Level 1 competition along with $350,000. In September 2009, they completed Level 2 and were awarded $500,000.[16][17][18] The company went into "hibernation mode" in 2013.[15]

Carmack is a well-known advocate of open source software, and has repeatedly voiced his opposition to software patents, equating them to robbery.[19] He has also contributed to open source projects, such as starting the initial port of the X Window System to Mac OS X Server and working to improve the OpenGL drivers for Linux through the Utah GLX project.

Carmack released the source code for Wolfenstein 3D in 1995 and the Doom source code in 1997. When the source code to Quake was leaked and circulated among the Quake community underground in 1996, a programmer unaffiliated with id Software used it to port Quake to Linux, and subsequently sent the patches to Carmack. Instead of pursuing legal action, id Software, at Carmack's behest, used the patches as the foundation for a company-sanctioned Linux port.[citation needed] id Software has since publicly released the source code to Quake, Quake 2, Quake 3 and lastly Doom 3 (including, later, the BFG Edition), all under the GNU General Public License (GPL). The Doom source code was also re-released under the GPL in 1999. The id Tech 4 engine, more commonly known as the "Doom 3 engine", has also been released as open source under the GPL.[20] The source code for Hovertank 3D and Catacomb 3D (as well as Carmack's earlier Catacomb) was released in June 2014 by Flat Rock Software with Carmack's blessing.[21][22] On the other hand, Carmack has several times over the years voiced a skeptical opinion about Linux as a gaming platform;[23] for instance in 2013 he argued for emulation "as proper technical direction for gaming on linux"[24] and in 2014 he voiced the opinion that Linux might be the biggest problem for the success of the Steam Machine.[25]

Carmack contributes to charities and gaming communities. Some of the recipients of Carmack's charitable contributions include his former high school, promoters of open source software, opponents of software patents, and game enthusiasts.

Carmack was so successful at id that by mid-1994 he had purchased two Ferrari Testarossas.[26] In 1997, he gave away one of his Ferraris (a 328 model) as a prize to Dennis Fong, the winner of the Quake tournament "Red Annihilation".[27]

He met his wife Katherine Anna Kang at the 1997 QuakeCon when she visited id's offices. As a bet, Kang challenged Carmack to sponsor the first All Female Quake Tournament if she was able to produce a significant number of participants. Carmack and Kang married on January 1, 2000 and planned a ceremony in Hawaii. Steve Jobs requested that they postpone the ceremony so Carmack could attend the MacWorld Expo on January 5, 2000. Both declined and made a video instead. They had a son in 2004. Carmack has a blog last updated in 2006 (previously a .plan), an active Twitter account, and also occasionally posts comments to Slashdot.

As a game developer, he differs from many of his contemporaries by avoiding commitment to a final release date for any game he is developing. Instead, when asked for a release date on a new title, Carmack will usually reply that the game will be released "when it's done."[28] Employees at Apogee, in their past years the publishers of games by id Software, adopted this business practice as well.[29] Other game developers, such as Blizzard Entertainment and Valve, have made similar statements.[30]

Carmack loves pizza. During his time at id Software, a medium pepperoni pizza would arrive for Carmack from Domino's Pizza almost every day, carried by the same delivery person for more than 15 years. Carmack had been such a regular customer that they still charge him 1995 prices.[35]

On occasion he has commended the efforts of similarly focused programmers — first Ken Silverman, who wrote the Build engine for 3D Realms, and later with Tim Sweeney of Epic Games, who writes the Unreal Engine.[36]

Titles are listed below in reverse chronological order.