He started his career with Border_Roads_Organisation of India from March 1975 to 1978 as Chief of emergency and outpatient medicine. He also worked at Siddartha clinic in Vijayawada. He later served for Government of Kenya a medical officer at Coast General hospital as up to October 1983. Thereafter he returned to India and started Prasad nursing home in Vijayawada where he worked till 1992. He often used to visit old age home, orphan centre for community service. In 1993 he shifted to Oman to join Juma medical clinic there. He is a highly personable, competent and team spirited doctor recognized for excelling in fast track, high stress environments able to put patient as ease and establish subtle and often difficult to made diagnosis. A Patient advocate, known for working closely with hospital staff and administration in enforcing all policies and procedure and exceeding regulatory compliance standards -local state and federals. He is a member of Indian_Medical_Association and also Family Welfare Scheme IMA. 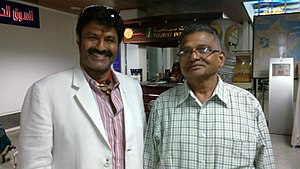 You have to Sign in or create an account to comment this article !
Retrieved from "https://en.everybodywiki.com/index.php?title=K._S._R._Krishna_Prasad&oldid=989518"
Hidden categories:
This page was last edited on 28 August 2020, at 09:41.
This page has been accessed 48 times.
Content is available under License CC BY-SA 3.0 unless otherwise noted.
Privacy policy
About EverybodyWiki Bios & Wiki
Disclaimers
Mobile view