Kanan Devi (22 April 1916 – 17 July 1992) was an Indian actress and singer.[1] She was among the early singing stars of Indian cinema, and is credited popularly as the first star of Bengali cinema. Her singing style, usually in rapid tempo, was used instrumentally in some of the biggest hits of New Theatres, Kolkata.

Kanan was born on 22 April 1916 in Howrah, West Bengal. In her autobiography, entitled "Sabaray Ami Nami", Kanan has observed that those she considered as her parents were Ratan Chandra Das and Rajobala, who lived together. After the death of her adoptive father, Ratan Chandra Das, young Kanan and Rajobala were simply left to fend for themselves. Her life story is a true tale of rags to riches. Some say she did her schooling (not completed) from Howrah's St. Agnes' Convent School.

A well wisher, Tulsi Banerji, whom she called Kaka babu, introduced Kanan when she was only ten to Madan Theatres/Jyoti Studios, where she was cast in a small role in Jaidev (1926), followed by Shankaracharya in 1927. She was known as Kanan Bala.[1]

From silent film roles as a child artist, Kanan made the successful transition into talkie films and was noticed with Jorebarat (1931), Manomoyee Girls School, Khooni Kaun and Maa (1934).

New Theatres's P.C. Barua wanted her to play the lead in his Devdas (1935),[1] but, due to contractual reasons with Radha, she could not act in the film, a factor she regretted all her life.

She came in contact with the music maestro Rai Chand Boral, who not only coached and familiarized her in the Hindi accent, but experimented with many classical Western and Indian forms in his music. She received her initial musical training under Alla Rakha. She was employed as a singer at the Megaphone Gramaphone Company, receiving further training under Bhishmadev Chatterjee. She later learnt Rabindra Sangeet under Anadi Dastidar. Kanan remained the top star of New Theatres until she resigned her contract in 1941 and began to freelance in Bengali and Hindi films.

Kanan turned producer with Shrimati Pictures in 1949 and later launched the Sabyasachi Collective with the film Ananya (1949). Her own productions were mainly based on the stories of Sharat Chandra Chattopadhyay.

Kanan married Ashok Maitra in December 1940. He was the son of the staunch Brahmo Samaj educationist Heramba Chandra Maitra. Despite their best intentions, the marriage could not withstand the severe condemnation by the then conservative society. Even the poet Rabindranath Tagore, who sent a token gift to the married couple received scathing criticism for blessing the couple. The main issue was that Kanan was not expected to be working in films after her marriage. She filed for divorce in 1945. Despite the pain of the divorce, Kanan expressed her immense gratitude towards her first husband for giving her social recognition through marriage for the first time in her life. To Kanan's credit, she maintained excellent relations with Rani Mahanalobis, sister to Ashok Maitra and her husband, the famous social scientist P.C. Mahanalobis and with Kusumkumari Devi, Ashok Maitra's mother, even after the marriage was severed.

Kanan married Haridas Bhattacharjee around 1949. Haridas Bhattacharjee was then ADC to the Governor of Bengal. He eventually left the naval service to join Kanan in her filmmaking venture and became a competent director. While raising their son Siddharth in Calcutta, she also formed and worked as the president of Mahila Shilpi Mahal, an organization to help senior female artists and other charitable and community causes, including those for the betterment of Bengali cinema.

Kanan Devi, as the first lady of the Bengali screen, received many honours for her contribution to Indian cinema. An honorary degree from Vishwabharati, the Padma Shree in 1968 and the Dadasaheb Phalke Award in 1976.

She died on 17 July 1992 in Bellevue Clinic, Calcutta when she was around seventy-six years of age. 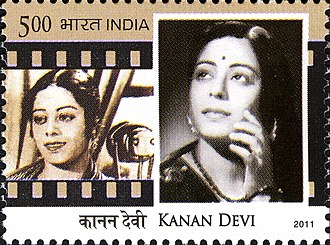 Share
Retrieved from "https://en.everybodywiki.com/index.php?title=Kanan_Devi&oldid=819931"
Categories:
Hidden categories:
This page was last edited on 19 June 2020, at 16:01.
Content is available under License CC BY-SA 3.0 unless otherwise noted.
This page has been accessed 716 times.
Privacy policy
About EverybodyWiki Bios & Wiki
Disclaimers