The Khatik (Hindi: खटीक) are an ethnic tribe found in the Indian subcontinent, mainly modern-day India, Pakistan and Nepal. The Hindu Khatik have scheduled caste status in India.[3] They are one of the most widespread communities in modern South Asia. Indian Khatik have a population of approximately 2.3 millions and are located mainly in New Delhi, Haryana, Rajasthan, Madhya Pradesh, Uttar Pradesh, Telangana, Andhra Pradesh and Himachal Pradesh.[4]

The Khatik claim a common ancestry from the Rajput tribe. Khatik used to provide meat to the army of Rajput rulers. King only assigns their personal "Rasoiya" (cook) from Khatik tribe. Khatiks used to live within the Rajputs kingdom and when Rajput organise "Yagya" Khatik used to sacrifice goat infront of Hindu devi Kaali.[5]

The Khatiks belong to the same ethnicity as the Rajputs, and inter-marriages take place among them. Like other Hindu communities, they are divided into clans called gotras like Chandel, Panwar, Dayma, Chauhan, Tanwar, Badgurjar, Kirar etc.[6] 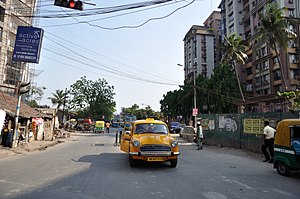 Khatik identified as Scheduled Caste in some states of India including Uttar Pradesh, Rajasthan and Madhya Pradesh while they are OBC status in Maharashtra and Bihar.[7]

Hindu Khatik caste has divided into these subgroups based on their livelihood, which are following :-

Khatik follow Hindu religion historically, but now they are also found in Islam and Jainism for the following reason:-

Retrieved from "https://en.everybodywiki.com/index.php?title=Khatik&oldid=483724"
Categories:
Hidden categories:
This page was last edited on 24 June 2019, at 13:48.
Content is available under License CC BY-SA 3.0 unless otherwise noted.
This page has been accessed 4,276 times.
Privacy policy
About EverybodyWiki Bios & Wiki
Disclaimers