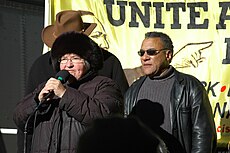 Larry Holmes is an American political activist currently serving the highest official of the Workers World Party,[1] holding the position of first secretary, and a member of the party Secretariat. He founded the Millions for Mumia movement, which seeks the release of Mumia Abu-Jamal, and co-founded the anti-war movement International ANSWER. He is a strong supporter of immigrants rights, and black and brown unity.

He twice ran for President of the United States on the Workers World Party (WWP) ticket, in 1984 and 1988. He was the vice presidential candidate of the WWP in 1992. In September 2010, Holmes was among the individuals and members of the organizations who attended the conference of President Mahmoud Ahmadinejad during his visit in New York. The leader of the Islamic Republic of Iran was in New York to attend the annual UN General Assembly.[2]

Retrieved from "https://en.everybodywiki.com/index.php?title=Larry_Holmes_(activist)&oldid=1003261"
Categories:
Hidden categories:
This page was last edited on 13 September 2020, at 02:18.
This page has been accessed 408 times.
Content is available under License CC BY-SA 3.0 unless otherwise noted.
Privacy policy
About EverybodyWiki Bios & Wiki
Disclaimers