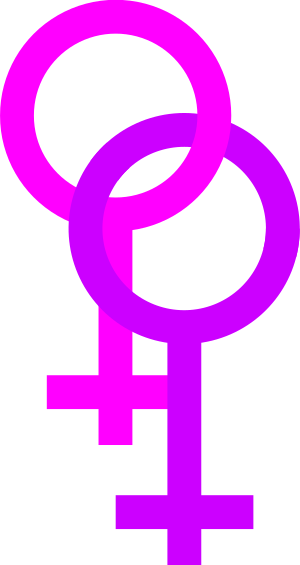 A lesbian sign made from two linked astronomical symbols for Venus. In ancient times the metal copper was associated with the Roman goddess Venus in line with traditional planetary metallurgy. Copper's ancient alchemy symbol, a circle (for spirit) above a cross (for matter), became a sign for both the goddess and the planet. It was later also used to represent the female in biology and popular culture. Here, it is doubled and twined in symbolic hues of lilac as a sign for lesbian.

Lesbian utopia refers to a conceptual community made up entirely of women who are not dependent on men for anything.[1][2]

The concept of an all-female society is mentioned in Greek mythology through a legend of the Amazons, a nation of all-female warriors. In this legend, once each year the Amazons call upon the Gargareans and mate with them.

It could be argued that a major hurdle for a philosophical lesbian utopia would be that, as with many species, human reproduction requires an egg (from the female), a sperm (from the male) and a womb as a suitable environment with an available source of nutrients in which an embryo can develop into a fetus and gestate until childbirth.

Scientists have created mouse pups from two female mice, including Kaguya.[3] The trial was conducted by researchers from the Tokyo University of Agriculture, led by Dr. Tomohiro Kono. The research uncovered that by suppressing the activity of a certain hormone from the original mouse eggs, they could initiate growth of the eggs by using two sets of female DNA, by increasing the activity of another hormone contained within the egg.[3]

However, Dr. Komo has stated that the extremely low success rate of the procedure uncovered by his team meant that just 2 out of 598 mice were able to be produced both successfully and safely using this method (Giving an estimated success rate of about 0.334%). He said that many of the mice died during the trial, with just two of them surviving to adulthood.[3]

Researchers have also dismissed the use of this technology in fertility treatment for the time being, citing that it is impossible to tell whether this treatment would even be applicable for use in this area without further research.[3] Dr. Komo has also expressed reservations regarding human fertility treatments, stating, "This is a very complicated thing. So no, It is impossible to do this experiment in a human. And I don't want to do it".[3] However, some researchers still believe the methods could have potential applications in stem cell research.[3]

Scientists have also found a way to fertilise human eggs using genetic material from any cell in the body.[4] This could eventually allow two or more females to conceive and bring a baby to term without male assistance. There have been some public health concerns amongst a vocal minority about the viability of the techniques put forward in this instance, particularly regarding the health of the children conceived through biotechnology, as well as the "high risk of creating damaged people" through genetic engineering of this type.[4]

It is as of yet unknown if any new biotechnology could be applied to humans, regardless of any ethical issues which may arise.[5]

More contemporary examples of lesbian utopian fiction include John Wyndham's Consider Her Ways (1956), Poul Anderson's Virgin Planet (1959), Joanna Russ's The Female Man (1975), Nicola Griffith's Ammonite (1993), and John Varley's story "The Manikins". These stories often include the premise that a gender-specific pandemic has eradicated all male human life on Earth or another world. The female survivors usually reproduce through parthenogenesis, whether through benign mutation or technological progress.

The 1984 Polish science fiction comedy Sexmission features two men, subjects of a hibernation experiment, who wake to find themselves in a post-apocalyptic, all female society.

Lithia, Episode 17 of the fourth season of The Outer Limits features a man who was cryogenically frozen and awakens in a world populated only by women.

British sci-fi writer Edmund Cooper explored the subject in several of his novels, including Five to Twelve (1968) and Who Needs Men (1972).

In the Mass Effect universe, the Asari are a monogender-pansexual "female" species.

Themyscira was created by William Moulton Marston to allegorize the safety and security of the home where women thrived apart from the hostile, male-dominated work place. It is governed by Aphrodite's Law, which stated: "Penalty of death to any Man attempting to set foot on Themyscira."[6][7][8]

Share
Retrieved from "https://en.everybodywiki.com/index.php?title=Lesbian_utopia&oldid=921438"
Categories:
Hidden categories:
This page was last edited on 5 August 2020, at 00:01.
This page has been accessed 439 times.
Content is available under License CC BY-SA 3.0 unless otherwise noted.
Privacy policy
About EverybodyWiki Bios & Wiki
Disclaimers
Dark mode