The province was formed from the northern region of Transvaal Province in 1994, and was initially named Northern Transvaal. The following year, it was renamed Northern Province, which remained the name until 2003, when it was formally changed to Limpopo after deliberation by the provincial government and amendment of the South African Constitution. An alternate name considered for the province was Mapungubwe.

Limpopo has the highest level of poverty of any South African province, with 78.9% of the population living below the national poverty line.[5] In 2011, 74.4% of local dwellings were located in a tribal or traditional area, compared to a national average of 27.1%.[6] The Northern Sotho language is spoken by more than half of Limpopo's population.

Limpopo Province shares international borders with districts and provinces of three countries: Botswana's Central and Kgatleng districts to the west and northwest respectively, Zimbabwe's Matabeleland South and Masvingo provinces to the north and northeast respectively, and Mozambique's Gaza Province to the east.[7] Limpopo is the link between South Africa and countries further afield in sub-Saharan Africa. On its southern edge, from east to west, it shares borders with the South African provinces of Mpumalanga, Gauteng, and North West. Its border with Gauteng includes that province's Johannesburg-Pretoria axis, the most industrialised metropole on the continent. The province is at the centre of regional, national, and international developing markets.

Limpopo contains much of the Waterberg Biosphere, a massif of approximately 15,000 km2 (5,800 sq mi) which is the first region in the northern part of South Africa to be named a UNESCO Biosphere Reserve. The massif was shaped by hundreds of millions of years of riverine erosion yielding diverse bluff and butte landforms.[8] The Waterberg ecosystem can be characterised as a dry deciduous forest or Bushveld. Within the Waterberg, archaeological finds date to the Stone Age. Nearby are early evolutionary finds related to the origin of humans. 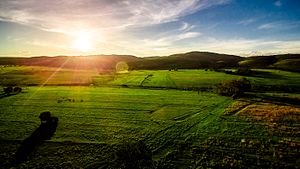 Sundown over one of the mountain ranges found in Limpopo.

The province is a typical developing area, exporting primary products and importing manufactured goods and services. It is also one of the poorest regions of South Africa with a big gap between poor and rich residents, especially in rural areas.[9] However, Limpopo's economy and standard of living have shown great improvement. A recent border shift with Limpopo's wealthier neighbour, Mpumalanga, was effected to try and bring some wealth into the province.[citation needed]

The bushveld is beef cattle country, where extensive ranching operations are often supplemented by controlled hunting. About 80% of South Africa's game hunting industry is found in Limpopo.

Sunflowers, cotton, maize and peanuts are cultivated in the Bela-Bela and Modimolle areas. Modimolle is also known for its table grapes. Tropical fruit, such as bananas, litchis, pineapples, mangoes and pawpaws, as well as a variety of nuts, are grown in the Tzaneen and Louis Trichardt areas. Tzaneen is also at the centre of extensive citrus, tea and coffee plantations, and a major forestry industry. 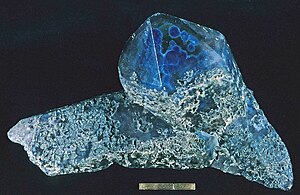 Ajoite in quartz, from the Messina mine, Limpopo Province, South Africa. Scale at bottom is one inch, with a rule at one cm.[citation needed]

Limpopo has the largest platinum deposit in South Africa.[citation needed] The Waterberg Coalfield, the eastern extension of Botswana's Mmamabula coalfields, is estimated to contain 40% of South Africa's coal reserves.[10]

Tourism is one of the three pillars of the Limpopo economy along with mining and agribusiness.[11] In 2008, the Province accounted for 5% of all foreign tourist bed nights in South Africa, numbers which are showing strong annual growth. The R 93 million Provincial tourism budget for 2010/11 represents 11% of Limpopo's total budget.[11][12]

Near Modjadjiskloof, at Sunland Baobab farms, there is a large Baobab tree which has been fashioned into a rather spacious pub.[13]

While Limpopo is one of South Africa's poorest provinces, it is rich in wildlife, which gives it an edge in attracting tourists. Both the private and public sectors are investing in tourism development.[citation needed]

The province has excellent road, rail, and air links. The N1 route from Johannesburg, which extends the length of the province, is the busiest overland route in Africa in terms of cross-border trade in raw materials and beneficiated goods. The port of Durban, South Africa’s busiest, is served directly[clarification needed] by the province, as are the ports of Richards Bay and Maputo. Polokwane International Airport is situated just north of Polokwane.

The Department of Education is charged with the responsibility of effecting quality education and training for all. The Department has to coordinate all professional development and support. Policies, systems, and procedures had to be developed. 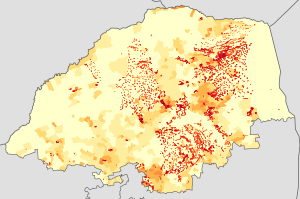 The population of Limpopo consists of several ethnic groups distinguished by culture, language and race. 97.3% of the population is Black, 2.4% is White, 0.2% is Coloured, and 0.1% is Indian/Asian. The province has the smallest percentage and second smallest total number of white South Africans in the country. It also has the highest Black percentage out of all the provinces.

The Northern Sotho people (of which the Bapedi are a part) make up the largest percentage of the black population, being 52% of the province. The Tsonga people comprise about 24.0% of the province; the Tsonga also comprise about 11.5% of Mpumalanga province since the southern part of their homeland, Gazankulu, was cut off from Limpopo and allocated to Mpumalanga. The Venda make up about 16.7%. Afrikaners make up the majority of Limpopo's white population, about 95,000 people; English-speaking whites number just over 20,000. Vhembe district has the smallest share of white people in Limpopo, about 5,000 total, while the Waterberg district has the largest share of whites, with more than 60,000 whites residing there. Coloureds and Asians/Indians make up a very small percentage of the province's total population.