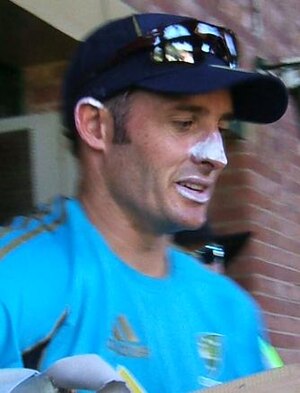 Hussey made his Test debut against West Indies in November 2005 at The Gabba. His first Test century came in his second match scoring 137 against the same team at the Bellerive Oval.[2] His highest Test score of 195 came against England at The Gabba in Brisbane during 2010–11 Ashes series between the teams.[3]

Hussey made his ODI debut against India in February 2004.[4]

He has also played 38 Twenty20 International (T20I) matches without scoring a century, his highest score in the format being 60*. He is jointly 59th (with Colin Cowdrey, Wally Hammond, Ijaz Ahmed and Shikhar Dhawan) overall among all-time combined century-makers.

Retrieved from "https://en.everybodywiki.com/index.php?title=List_of_international_cricket_centuries_by_Michael_Hussey&oldid=1287461"
Categories:
Hidden categories:
This page was last edited on 28 January 2021, at 05:13.
This page has been accessed 328 times.
Content is available under License CC BY-SA 3.0 unless otherwise noted.
Privacy policy
About EverybodyWiki Bios & Wiki
Disclaimers