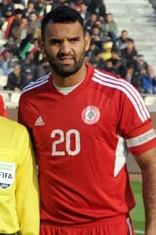 Roda Antar is a former association football midfielder who represented the Lebanon national football team from 1998 to 2016. He was the country's all-time top goalscorer, before being surpassed by Hassan Maatouk in 2019.[1] Since debuting for Lebanon against Algeria on 23 September 1998, Antar has scored 20 goals in 63 international appearances.[2] His first international goal came two years later in his 11th appearance for his country against Kyrgyzstan.[2] He surpassed Wartan Ghazarian's record of 19, with a goal against Laos in a 2018 FIFA World Cup qualifier on 12 November 2015.[3][4]

Antar has scored one hat-trick for his national team, scoring three against Yemen in a 4–2 win at the 2002 Arab Nations Cup.[2] He has scored more goals against Yemen than any other team, with three goals against them.[2] Antar has scored more than half of his goals at home, with four at the Beirut Municipal Stadium, three at the Camille Chamoun Sports City Stadium, two at the Saida International Stadium, and two at the Tripoli Municipal Stadium.[2]

The majority of Antar's goals have come in qualification matches, with 12 goals having been scored in FIFA World Cup qualifiers, and one in AFC Asian Cup qualifiers.[2] He has also scored three goals in friendlies, three goals at the Arab Nations Cup and one goal at the WAFF Championship.[2]

Retrieved from "https://en.everybodywiki.com/index.php?title=List_of_international_goals_scored_by_Roda_Antar&oldid=924312"
Categories:
Hidden categories:
This page was last edited on 5 August 2020, at 18:41.
This page has been accessed 256 times.
Content is available under License CC BY-SA 3.0 unless otherwise noted.
Privacy policy
About EverybodyWiki Bios & Wiki
Disclaimers