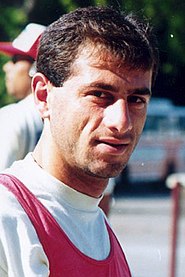 Wartan Ghazarian is a former association football forward who represented the Lebanon national football team from 1995 to 2001. He was the country's all-time top goalscorer, before being surpassed by Roda Antar in 2015.[1][2] Since debuting for Lebanon against Slovakia on 6 December 1995, Ghazarian has scored 19 goals in 39 international appearances.[3] His first international goal came one month later, in his 2nd appearance for his country against Cyprus.[3]

Retrieved from "https://en.everybodywiki.com/index.php?title=List_of_international_goals_scored_by_Wartan_Ghazarian&oldid=924317"
Categories:
Hidden categories:
This page was last edited on 5 August 2020, at 18:43.
This page has been accessed 277 times.
Content is available under License CC BY-SA 3.0 unless otherwise noted.
Privacy policy
About EverybodyWiki Bios & Wiki
Disclaimers