This is a list of notable microbreweries. A microbrewery is a brewery which produces a limited amount of beer.[1] The qualifications to be classified as a microbrewery vary by country. The term "microbrewery" originated in the United Kingdom in the late 1970s to describe the new generation of small breweries which focused on producing traditional cask ale. The first example of this approach was Selby Brewery founded by Martin Sykes in 1972 in the Yorkshire town of the same name.[2] Although originally "microbrewery" was used in relation to the size of breweries, it gradually came to reflect an alternative attitude and approach to brewing flexibility, adaptability, experimentation, and customer service. The term and trend spread to the United States in the 1980s, where it eventually was used as a designation of breweries that produce fewer than 15,000 U.S. beer barrels (1,800,000 liters) (475,000 U.S. gallons) annually.[3]

Located in the United States unless otherwise noted.

An opened Churchkey Pilsner can from the Churchkey Can Company. The brewery's name refers to its flagship beer, which must be opened using a churchkey.

Cropton Brewery is located in Cropton, a village and civil parish in the Ryedale district of North Yorkshire, England.

File:Dixie-huber-wi.JPG
A bottle of beer made by Dixie Brewing Company

The entrance to Georgetown Brewing Company 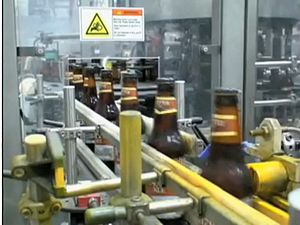 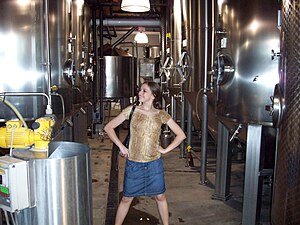 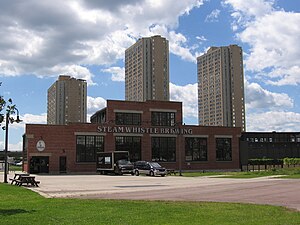 Others articles of the Topics Companies AND Lists : List of companies of the United States