This list of unsolved deaths before 1900 includes notable cases where victims have been murdered or have died under unknown circumstances, including murders committed by unknown serial killers. The mysteriously deceased are listed chronologically by year. For serial killer cases that span multiple years, entries are listed under the year the first murder took place. 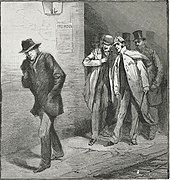 Others articles of the Topics Law AND Lists : List of composers who studied law

Retrieved from "https://en.everybodywiki.com/index.php?title=List_of_unsolved_deaths_(before_1900)&oldid=1007547"
Categories:
Hidden categories:
This page was last edited on 17 September 2020, at 03:26.
This page has been accessed 144 times.
Content is available under License CC BY-SA 3.0 unless otherwise noted.
Privacy policy
About EverybodyWiki Bios & Wiki
Disclaimers