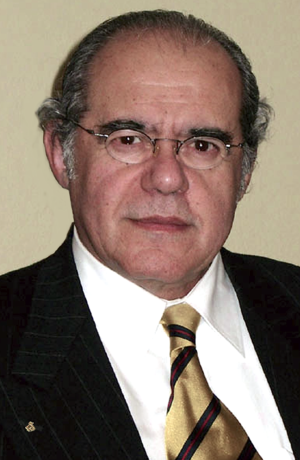 Marcello Ferrada de Noli (born in Chile 25 July 1943) is a Swedish professor emeritus [1] of epidemiology,[2] and medicine doktor in psychiatry (Karolinska Institute, Sweden). He was Research Fellow and lecturer at Harvard Medical School, Boston, United States, and afterwards head of the research group of Cross-Cultural Injury Epidemiology at the Karolinska Institute until 2008.[3] He is the founder of the NGO Swedish Doctors for Human Rights, SWEDHR (2015).

In his youth he was one of the founders [4][5][6] in 1965 of the Revolutionary Left Movement (Chile), MIR, a far left guerrilla organization with roots in the Socialist Party of Chile, where Ferrada de Noli participated at its leadership in Concepción.[7][8][9][10] MIR, which had about 10,000 members in 1973,[11] is described as Pinochet regime’s “number one counterinsurgency target”.[12] He was co-author of the MIR “Political-Military Thesis”,[13][14][15][16][17][18] MIR first document. A history publication from Academy of Christian Humanism University describes that Miguel Enríquez, Bautista van Schouwen, Marcello Ferrada de Noli and Luciano Cruz, constituted the “standing out” cadres among the young generation of MIR.[19]

Marcello Ferrada de Noli was first arrested in 1966, charged of attacking carabineers during clashes in conjunction with the long health-workers’ strike that year.[20] Later in 1969, Ferrada de Noli was among the “13 MIR-fugitives from justice” [21] included in the national arrest warrant issued by the Chilean authorities prosecuting MIR’s subversion activities. Newspapers in Concepción report that Ferrada de Noli came near being captured on two occasions, but escaped.[22][23] Carabineers finally arrested him in a checkpoint near Concepción and kept him under interrogation during the day.[24] Later that evening they handed him over to agents of the Security Police for further interrogation at its headquarters.[25] He was days after delivered to the Prison of Concepción, to be held incommunicado.[26]

When the 1973 Chilean coup d'état of General Augusto Pinochet put an end to the socialist government of President Salvador Allende, MIR attempted armed resistance,[28] Ferrada de Noli was captured and held prisoner in Quiriquina Island.[29][30] He then appeared in a front-page photo of newspaper La Tercera among prisoners described as “the extremists that have attacked the military forces with fire weapons”.[31]

In 1974, General Augustin Toro, in charge of the 3rd Division (Concepción), and under pressure from Ferrada de Noli's family –several of them officers and commanders at the armed forces, and also in the judiciary- ordered his release from the Quiriquina camp in exchange of expulsion from the country under military custody. He was airborned to México but escaped in a stopover in Lima, Peru, from where he made his way to Italy.[32] In Rome he testified at the Russell Tribunal on the torture and health conditions of the prisoners at the Quiriquina Island, the Navy Base in Talcahuano, and the Football stadium in Concepción, the places where he has been detained. His 12-page testimony and participation in the Russell Tribunal was found 2017 in the Archive of the Senator Lelio Basso Foundation, organizer of the event.[33]

After a few years holding a Geneva Convention pass in Sweden, obtained with help of Amnesty International, he received Swedish citizenship in 1979. Ensuing, he restarted academic activities and obtained his degrees of Licentiate in Medical Sciences in psychiatry and a PhD at the Karolinska Institute in Stockholm.

His scholarly work thereafter –mainly published during his research time at Harvard Medical School– has been cited in over 800 scientific articles and books,[35] and his research findings are also described in the textbook of psychiatry used in medical education at Swedish universities.[36] The research journal Clinical Psychology Review (2009) wrote that Ferrada de Noli and co-workers had found a new pathway in the pathogenesis of suicidal behaviour associated with PTSD,[37] and David Lester in “Suicide and the Holocaust” referred Ferrada de Noli’s finding of significant correlations between specific methods in suicidal behavior and methods used in torture inflicted to prisoners with PTSD, as “amazing”.[38] A statement by two former department-head professors at the Karolinska Institute reads, “Professor Ferrada-Noli’s research on PTSD and suicidal behavior in a cross-cultural perspective has been internationally recognized.”[39] De Noli also was first to establish ethnicity as significant risk factor for suicidal deaths in Sweden.[40]

Between 2005-2012 he was appointed by the Swedish government alternate scientific member of the Swedish Central Ethical Review Board Etikprövningsnämnd for research, in Uppsala.[41] Also in that period. Ferrada de Noli received two honorific appointments, as Affiliated Professor at the Medical Faculty of the University of Chile,[42] respectively Invited Professor at the "Instituto Superior de Ciencias Médicas de la Habana", Cuba.[43]

Following retirement, Marcello Ferrada de Noli also founded the online magazine The Indicter,[44] authoring reports on “human rights and geopolitical issues”,[45] which have been considered controversial by some European mainstream media. In April 2017, Swedish newspaper Dagens Nyheter (DN) reviewed his publications, and summarized, “(De Noli) means that Julian Assange is object of a conspiracy, that Ukraine is ruled by fascists, and that Swedish media –including DN– spreads Russophobic propaganda”.[46]

A variety of European mainstream media have also hypothesized whether Ferrada de Noli’s opinions on geopolitical issues, or those of his organization SWEDHR, would be in line with Russia’s stances. For example Le Figaro,[47] ARD/BR,[48][49] and Der Spiegel.[50] Dagens Nyheter,[51] together with other Swedish newspapers, e.g. Aftonbladet[52] Expressen,[53] Göteborgs-Posten,[54] Västerbottens-Kuriren,[55] Uppsala Nya Tidning,[56] also have addressed Ferrada de Noli's “frequent interviews in Russian media and Russian-government international propaganda channels”, and questioned the mentions to his work and to his organization SWEDHR done at press briefings of the Ministry of Foreign Affairs of the Russian Federation.[57][58][59][60][61]

However Ferrada de Noli’s contested those criticism in the journal of the Swedish Medical Association Läkartidningen.[62] Official documents of the United Nations Security Council (UNSC) indicate that publications authored by Ferrada de Noli regarding the Syrian conflict have been cited and/or submitted as official documents at the UNSC by the Russian and Syrian ambassadors,[63][64][65][66] added the Russian envoys at the OPCW [67] or the ambassador to the UK.[68]

Club Suisse de la Presse (Geneva Press Club) organized a conference 28 November 2017 aimed to debate the role of Syrian humanitarian organizations operating in the war zone (i.e. White Helmets). Marcello Ferrada de Noli was one of the three invited speakers in his capacity of SWEDHR chairman and chief editor of The Indicter magazine. Ensuing, Reporters Without Borders (RWB) called the cancellation of the conference arguing that the invitation to Ferrada de Noli was unacceptable, for he being “president of an organization that, according with our information, acts as a tool of Russian propaganda.” Ensuing the publication of the letter by the Swizz pres,[69] De Noli called RWB on Twitter to “publish your evidence now, or shame”.[70] In his reply to RWB, the president of the Geneva Press Club, Guy Mettan, dismissed the attacks to Ferrada de Noli and another participant [71] as “not worth of journalism”, and continued with the realization of the conference.[72][73] Earlier that year the Russian TV network Rossiya-24 have also reported on threats to Ferrada de Noli, to which he commented in the interview (April 2017), “SWEDHR is not afraid and it will continue its work”.[74]

De Noli has also been criticized in the Swedish media for his defence of Julian Assange while a legal case operated in Sweden 2010-2017. He then wrote over 200 articles in his blog [75] and published the book “Sweden vs. Assange. Human Rights Issues”, claiming that the case was instead political.[76] In a RT (TV network) interview he said that “WikiLeaks is a lifeboat to democracy”,[77] and 2011, via Jennifer Robinson (lawyer), he submitted to the London Court deliberating the extradition of Assange, a testimony based on his investigation “Swedish Trial by Media”.[78] In 2012, Swedish Radio said in a broadcast that Ferrada de Noli have implicated “a social democratic feminist working together with ‘arms companies’ trying to get Assange”.[79] Ferrada Noli denied that and asked Swedish Radio for a retraction.

Earlier controversies have involved articles in Swedish medical journals and media on his public opposition to the Swedish diagnose “utbrändhet” (work-related stress ‘burnout’), which he said it didn’t have epidemiological ground.[80] When he wrote in DN that one risk factor for “utbrändhet” in women could be stress caused by a double working load, at the job and then at home –contradicting the notion of an advanced Swedish gender equality,[81] Minister Mona Sahlin commented that his thesis was “a bid insulting, to say the least”.[82] Later in 2005, Aftonbladet published a half front-page headline, “Professor in attack against the burned-out”. It referred an interview where Ferrada de Noli stated that to be displeased with a job cannot be equated with a medical diagnose,[83] and a new debate ensued in the Swedish media.[84] In 1998, at that time professor in Norway, De Noli requested the legal extradition of General Augusto Pinochet, to be judged in a European court on allegations of torture and war crimes.[85][86][87]

Swedish newspaper Dagens Nyheter (2008) described Ferrada de Noli as “left-liberal”,[88] and newspaper Ystads Allehanda (2013) writes, “Left-liberal. But his conservative past continued to chase him”.[89] In newspaper Expressen (2018) Ferrada de Noli declared he participated as “social-libertarian” in the foundation of the guerrilla organization MIR in 1965, as well of been transitorely active in the Swedish Liberal Party during the 80’s – which at the time had a social-liberal profile in Swedish politics.[90]

In an op-ed in Dagens Nyheter (2015) Ferrada de Noli advocated for Sweden to return being a neutral country “as it was in Olof Palme’s times”, and “resuming an active role in the work for peace and respect for human rights in the world” [91]

Marcello Ferrada de Noli was born in Copiapó, Chile, in family of Italian origin, lineage-descendants to the nobleman and explorer Antonio de Noli.[92] His father was an officer in the armed forces and elite equestrian, and later company owner. His mother, professor at the University of Concepción. He lives in Italy and he is the father of seven sons and one daughter.[93]