Meghan Catherine "Meg" McGuffin (born February 1, 1993) is an American beauty pageant titleholder from Ozark, Alabama, who was crowned Miss Alabama's Outstanding Teen 2007 and Miss Alabama 2015. She competed for the Miss America 2016 title in September 2015 and was named fourth runner-up.

McGuffin began successfully competing in pageants at an early age, entering her first pageant at age 6.[2][3] She held the title of Little Miss Clayhatchee until forced to relinquish it in October 2000 after being named the 2000 Little Miss National Peanut Festival, winning a color television, a Huffy bicycle, several Beanie Babies, scholarships, and other prizes.[4][5]

On January 25, 2014, McGuffin was crowned Miss Auburn University 2014 and eligible to compete in the statewide 2014 Miss Alabama tournament.[2] This was McGuffin's third attempt at the Miss Auburn University title having placed as second runner-up in 2013.[14] Her "Healthy is the New Skinny" platform promoted healthy body images for women. McGuffin did not place among the 10 semi-finalists for the 2014 title.[9]

McGuffin was crowned Miss Phenix City 2015 which made her eligible to compete at the 2015 Miss Alabama pageant.[15][16] As part of the pageant's commitment to service in the community, each contestant raised money for Children's Miracle Network Hospitals by working on a coordinated group service project on April 18, 2015.[17][18] On June 1, the contestants gathered at Dreamland Bar-B-Que in Birmingham to write thank you cards for American troops serving overseas. In addition, McGuffin and seven others participated in a hands-free pork rib eating contest.[19][20]

One of 50 contestants in the state competition, McGuffin spent three days in preliminary judging rounds and was named as one of 12 semi-finalists.[21] After an on-stage evening on talent, swimsuit, and evening wear competitions, McGuffin was named one of 5 finalists for the crown. Each of the finalists answered questions from the judges before they began ranking the entrants and selecting a winner.[22] McGuffin won the state competition on Saturday, June 7, 2015, when she received her crown from outgoing Miss Alabama titleholder Caitlin Brunell.[3] 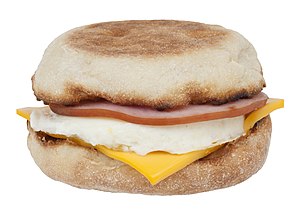 As the reigning Miss Alabama, McGuffin's duties include speaking to students and community groups, visiting patients at Children's of Alabama in Birmingham,[23] and participating in the Miss Alabama Fashion Show and Luncheon in Vestavia Hills.[24]

McGuffin served as Alabama's representative at the Miss America 2016 pageant in Atlantic City, New Jersey, in September 2015.[25][26] In the televised finale on September 13, 2015, she performed a contemporary dance en pointe to "Clubbed to Death" from the soundtrack to The Matrix during the talent portion of the competition.[27] In the interview portion, she was asked why Donald Trump was so popular as a political figure. McGuffin answered that he is an "entertainer" and that the GOP should be "absolutely terrified" that he was crowding out more qualified candidates.[28] Her personal platform is "Healthy is the New Skinny - Promoting Positive Body Image".[27] She was named fourth runner-up to Betty Cantrell and awarded a $10,000 scholarship prize.[29][30] She was also recognized as one of only 2 state representatives to have earned the Duke of Edinburgh Gold Medal for community service, and was awarded 2nd runner up for the Miss America Quality of Life community service award which earned her an additional $2000 cash scholarship.

McGuffin was raised in Ozark, Alabama, and graduated Salutatorian of her class from Carroll High School in 2011.[26] Her childhood nickname was "Egg McMuffin".[10] Her custom Alabama license plate reads "EGMCMFN".[31] McGuffin earned a bachelor's degree from Auburn University in Media Studies/Political Science and was pursuing a master's degree in administration of higher education at Auburn when she was crowned Miss Alabama.[32][33][16][7] While at Auburn, McGuffin became a member of the Phi Mu female fraternal organization.[34]

Other articles of the topics Biography AND Alabama : A. B. George, W. E. Whetstone

Share
Retrieved from "https://en.everybodywiki.com/index.php?title=Meg_McGuffin&oldid=2684019"
Categories:
Hidden categories:
This page was last edited on 15 August 2016, at 11:05.
Content is available under License CC BY-SA 3.0 unless otherwise noted.
This page has been accessed 23 times.
Privacy policy
About EverybodyWiki Bios & Wiki
Disclaimers