MAASU works to recognize the needs of the APIDA community by assisting schools with the establishment of Asian American student organizations, promoting leadership among students, addressing educational needs and rights of the community, and developing a channel of communication among APIDA student organizations across the Midwest.

MAASU strives to recognize the needs of the Asian Pacific Islander Desi American (APIDA) community by:

Promoting leadership among APIDA students through programs including, but not limited to, the Leadership Retreat, Spring Conference, and other various programming Assisting schools with the establishment of APIDA student organizations, an APIDA cultural center and an Asian American Studies program Supporting and encouraging all APIDA students to work toward social change by providing a forum for social consciousness Developing and maintaining a channel of communication for APIDA student organizations in the Midwest through emails, newsletters and networking Uniting and strengthening the APIDA community stance against all forms of oppression

After the 1982 murder of Vincent Chin in Detroit, Michigan, many Asian Americans tried to make sense of the racially motivated hate crime. The killers were never held accountable for the murder after legal battles that took place into the late 1980s. The Vincent Chin case became one of the most highly publicized nationwide Asian American civil rights campaigns and it sparked community organizing and college student activism against racism and hostile campus climates.[3]

As MAASU Founder Charles Chang (1964–2018) stated, "We needed a way to share our experiences as Asian Americans in the Midwest. Coming together with others made us realize we were not alone and that we could feel proud of who we were." 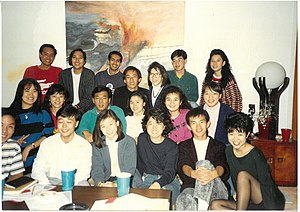 By 1990, more than 20 universities in the Midwest had formed Asian Pacific Islander American (APIA) organizations. Some had been around for years, while others were still in their infancy. Undergraduate students felt a need for a union that would support the growth of their groups and organize Midwestern Asian American students for political activism.

The first MAASU leadership team was formed, and the inaugural MAASU Leadership Retreat occurred in October 1991 at Purdue University, in West Lafayette, Indiana.[5]

Over the years, MAASU has engaged thousands of students through working with Midwest colleges and universities to host Leadership Retreats (named changed to Leadership Summit in 2016), Spring Conferences, regional programs, APIDA Heritage Month celebrations, and advocacy campaigns. In 2016, the MAASU Alumni Association (MAA) was officially launched to bring together past MAASU conference attendees and to continue building and sustaining relationships between MAASU and its alumni.[6] In 2018, the organization was formally renamed Midwest Asian Pacific Islander Desi American Students Union to be more inclusive. The acronym ‘MAASU’ remains the same.

Every fall, MAASU hosts a Leadership Summit (LS), catered to 150-200 students, and every spring, MAASU hosts a Spring Conference (SC), accommodating over 700 attendees. Each conference brings to light the history, challenges, and initiatives that the Asian Pacific Islander Desi American community faces. These conferences are hosted at different schools every year, allowing for the students around the Midwest to travel, explore, and gain a further understanding of the resources that their peers have. In addition, each host school showcases the talent of its students and local community through cultural performances, workshops, and keynotes. Each conference closes with a banquet, and during the Spring Conference, three MAASU awards are presented: Midwestern Star Award, Charles Chang Leadership Award, and the Board of Advisors Award.

MAASUx is a regional event, coordinated in collaboration with a campus host organization, designed to create additional opportunities to engage the midwest APIDA student community. MAASUx is a free event designed to attract college students from surrounding campuses to participate in educational workshops and fun activities. Through the more intimate setting of MAASUx programs, students can engage in creating high-quality connections with their peers and have the opportunity to reflect on their intersecting identities and experiences. These events are normally attended by 50-100 students.

MAASUx was initially launched in 2010 as MAASU Mixers before changing its name in 2017. Additionally, each MAASUx event began having a programming theme in 2017.[7]

Share
Retrieved from "https://en.everybodywiki.com/index.php?title=Midwest_Asian_Pacific_Islander_Desi_American_Students_Union_(MAASU)&oldid=1237267"
Categories:
Hidden category:
This page was last edited on 12 January 2021, at 13:28.
Content is available under License CC BY-SA 3.0 unless otherwise noted.
This page has been accessed 197 times.
Privacy policy
About EverybodyWiki Bios & Wiki
Disclaimers