Mohammad Ashraf (born 29 October 1995) is an international rated chess player from Odisha, India. He has completed his bachelor's degree in Electronics and Telecommunication Engineering from KIIT University, Bhubaneswar. He has won the National Open Chess Title at the All India Open DBCA Cup and represented India in the most prestigious World Junior( U-20) Chess Championship in 2014. He has also clinched the U-20 junior category 1st prize at the 3rd London Chess Classic tournament, London,U.K. in 2011. He is a registered member of the Fédération Internationale des Échecs or World Chess Federation, a member of the All India Chess Federation and a member of the European Chess Union.[2]

Mohammad Ashraf is a resident of the millennium city Cuttack. He is the youngest son of Mohammad Nayeem, an ex-serviceman of the Indian Air Force and Rumana Perween. He has an elder brother Mohammad Asjad, an Aeronautical engineer. He completed his primary education from Stewart School, Cuttack and completed high school in the +2 Science stream from Ravenshaw Junior College, Cuttack. He was introduced to the game of Chess at the age of 11 by his father and quickly took keen interest in it. He has been spending most of his time in traveling to various places for participating in chess tournaments. His father often accompanies him in his trips. Dr.Achyuta Samanta, the founder of KIIT and KISS and a great patron of Chess in the state, recognized his talent and awarded him a generous scholarship to pursue bachelor's degree in Electronics and Telecommunication Engineering in the KIIT University, Bhubaneswar Odisha.

His father has been very instrumental throughout his career. He also credits his success to his brother for his invaluable technical help and mother for her unswerving support. However, he believes that the real motivation in his chess career comes from the tournament in London where he shared the playing hall with some of the greatest players in the history of chess. In a candid interview he said "The mere glimpse of your sports hero in person is in itself a dream come true and being able to momentarily converse with him is simply inexplicable".

The Annual London Chess Classic Festival hosts one of the strongest tournaments every year, which fields the best players from around the globe to compete in a round robin system of play. The likes of Magnus Carlsen, Vladimir Kramnik , Levon Aronian , Hikaru Nakamura and Viswanathan Anand have been the stalwart participants since its inception. This grand event is commentated on by some of the world's finest chess commentators, and broadcast live on the internet. The event is also visited by chess legends like GM Garry Kasparov and GM Victor Korchnoi as guests.

He has won many championship titles at State, National and International competitions. The most prominent of them include titles in the state U-17,[3] state U-19,[4] state U-25,[5] state Blitz open[6] etc.

He has had many commendable performances at the national level. Most cherished is his maiden National open chess title which he won in the

Winner of the DBCA All India Cup 2014

DBCA All India Fide Rating Chess Tournament 2014 in Kolkata, India.[7] and bagged a handsome cash prize.[8][9][10] He has also represented the state twice in the National Challengers Chess Championship in the year 2010[11] and 2011.[12] In 2010 he finished in the top 6 of 36th National Sub - Junior Chess Championship at New Delhi[13] by virtue of which he received an exposure trip sponsored by Sports Authority of India (SAI), to participate in the very prestigious 3rd London Chess Classic Tournament 2011 at the Olympia Hall in London, U.K. where he clinched the 1st prize in the U-20 Junior Category.[14][15] However, his most notable achievement has been representing India in the World Junior U-20 Chess Championship 2014 at Hotel Hyatt in Pune, India where he finished with a career best of 54th rank.[16][17] He demonstrated an uncompromising style of chess and in the end remained invincible with the white pieces finishing with a +7 -6 =0 score i.e. with no draws.[18]

He represents the KIIT University's team in the Universities Team Championship. The team was runner-up in the East zone Inter-zonal 2014[19] and he was awarded the gold medal for his individual performance on board three. The team subsequently qualified for the Nationals at the Amity University Noida,Delhi where they tied for the bronze medal with Delhi University but narrowly finished fourth on the Buchholz tie break score.[20][21] In the period from 2015–16, he captained the KIIT University's National Chess Team that emerged 2nd runner's up in the East Zone Inter University Chess Championship,2015[22] and the team qualified to represent in the prestigious All India Inter Zonal Inter University Chess Championship, 2016 in Bihar,[23] where he was awarded the Gold Medal for best performance on board four.[24] He[25] remained the only player with a 100% score i.e. five wins in five rounds and ranked 1st in the final individual rankings in the tournament,[26][27] ahead of prominent players like International Master Girish A Koushik[28] and Fide Master Ankit Gajwa[29] among other titled players who had participated in this event.[30][31] 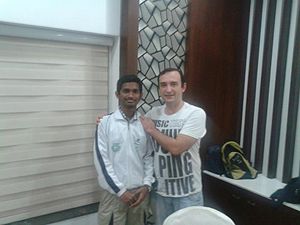 Share
Retrieved from "https://en.everybodywiki.com/index.php?title=Mohammad_Ashraf_(chess_player)&oldid=934427"
Categories:
Hidden categories:
This page was last edited on 9 August 2020, at 02:26.
Content is available under License CC BY-SA 3.0 unless otherwise noted.
This page has been accessed 1,677 times.
Privacy policy
About EverybodyWiki Bios & Wiki
Disclaimers