Naseem Banu (4 July 1916–18 June 2002) was an Indian film actress. She was referred to as Naseem and known as "Beauty Queen" and the "first female superstar" of Indian Cinema.[1] Starting her acting career in the mid-1930s she continued to act till mid-1950s. Her first film was Khoon Ka Khoon (Hamlet) (1935) with Sohrab Modi under whose Minerva Movietone banner she acted for several years. Her high-point came with Modi's Pukar (1939) in which she played the role of Empress Nur Jahan. According to composer Naushad she got the sobriquet Pari-Chehra (fairy face) Naseem through the publicity advertisements of her films.[2] She was the mother of actress Saira Banu and mother-in-law to the actor Dilip Kumar.[3]

Naseem Banu was born as Roshan Ara Begum in Old Delhi, India, into a community of performers and entertainers. Her mother, Shamshad Begum, also known as Chhamian Bai,[4] was a famous and well-earning singer of those days. Years later, when Naseem was in her prime, and earning a salary of ₹ 3500, she stated that her mother was, even at that time in her old age, earning more than she was.[5] Naseem's father was the head of a wealthy, land-owning, aristocratic family and descended from royalty. He was Nawab Abdul Waheed Khan of Hasanpur.

Naseem, then named Roshan Ara Begum, studied at Queen Mary's High School, Delhi; her mother Shamshad Begum wanted her to become a doctor.[6] Naseem was keen on films and admired the actress Sulochana (Ruby Myers), ever since she had seen a film of hers, but her mother was against the idea of films.[6] On a visit to Bombay, Naseem got interested in seeing the film shootings and at one of the sets she was approached by Sohrab Modi to play Ophelia in his film Hamlet. Her mother refused permission and Naseem went on a hunger-strike till her mother agreed. Having played the role, Naseem was unable to continue her education as the school was shocked at her acting in films, then considered a lowly profession.[1]

Naseem returned to Bombay and signed a contract with Sohrab Modi. She had started her career with Khoon Ka Khoon (Hamlet) (1935)[citation needed] and went on to make several films with Modi under the Minerva Movietone banner. After acting in films like "Khan Bahadur" (1937), Talaq (Divorce) (1938), Meetha Zahar and Vasanti (1938) she started work in what became known as her most famous film Pukar in the role of Noor Jahan. To prepare for the film she went riding every day and learnt singing. The film took over a year to complete and brought Naseem into prominence in a spectacular manner.[7] One of her songs, "Zindagi Ka Saaz Bhi Kya Saaz Hai" became popular with the audiences.[8] The publicity of the film dealt on her beauty calling her Beauty Queen and Pari Chehra a name that was to endure over the years before passing on to her daughter Saira Banu.[3] 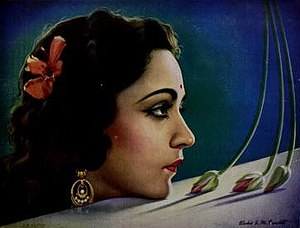 After the classic Pukar, the demand for Naseem as an actress increased and she was approached by several film studios to act with them. But Sohrab Modi refused to release her from her contract. This caused some uneasiness between the two. Sheesh Mahal (1950), produced by Minerva show-cased her acting talents devoid of make-up and jewellery and clad only in simple sarees.[1] From Minerva Movietone, Naseem moved to Circo and then Filmistan studios where she performed in Chal Chal Re Naujawan with Ashok Kumar.

Married to Ehsan by now, the husband-wife team started Taj Mahal Pictures[9] and made several films like Ujala (1942), Begum (1945), Mulaqat (1947), Chandni Raat (1949) and Ajeeb Ladki (1942) under the home banner. The last two were also directed by her husband, Mohammed Ehsan.[10] However she did a couple of action and fantasy films ("low-grade films") like Sinbad Jahazi (1952) and Baghi (1953), in which she was not accepted by the audiences. She acted in Minerva’s Nausherwan-E-Adil (1957) in a small role and then quit acting.[8] She continued to remain active, first trying her hand as a producer, and then as her daughter’s dress-designer when Saira entered films with Junglee (1961).

Naseem married her childhood friend an architect, Mian Ehsan-ul-Haq, with whom she started the Taj Mahal Pictures banner. They had two children, a daughter Saira Banu[13] and a son, Late Sultan Ahmed ( 1939 - 2016 ) . Naseem’s husband opted to leave India and settle in Pakistan following Partition. Naseem stayed back in India with her children. Ehsan took the negatives of her films releasing the films in Pakistan where she had a following because of it.[14] Naseem moved to England and stayed there for some time with both her son and daughter studying there for a while.[9] Naseem helped Dilip Kumar and Saira Banu get married according to the Times of India report with the 44-year-old Kumar marrying a 22-year-old Saira Banu.[15] However, in the Stardust interview Naseem stated that she was surprised at the two getting married as she thought that Dilip Kumar was a "confirmed bachelor" though she had noted the interest Kumar was taking in Saira Banu.[14]

Retrieved from "https://en.everybodywiki.com/index.php?title=Naseem_Banu&oldid=819924"
Categories:
Hidden categories:
This page was last edited on 19 June 2020, at 15:00.
This page has been accessed 243 times.
Content is available under License CC BY-SA 3.0 unless otherwise noted.
Privacy policy
About EverybodyWiki Bios & Wiki
Disclaimers
Mobile view