Nigar Sultana was born on June 21, 1932 in Hyderabad, India. She was the youngest daughter of a family of five. She has two brothers and two sisters. She spent her childhood in Hyderabad where her father held the rank of a Major in the Nizam’s State Army.[1]

She went to school for a while and later studied at home. She took part in a school drama on one occasion and ever after was keen on acting.[1]

The first film Nigar ever saw was Hum Tum Aur Woh (1938). She was so utterly thrilled by it that when Jagdish Sethi, a friend of her father’s, offered her the lead in a film he was making with Mohan Bhavnani, she took it on the spot.[1]

She entered the films with the 1946 film Rangbhoomi. Raj Kapoor's Aag (1948) was her first big break to Bollywood. She played the character role of "Nirmala", which was equally appreciated by critics and audience. After that, she played character roles in a number of films.[2] 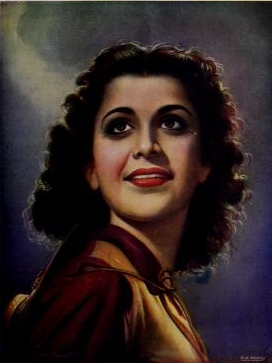 Her first big picture was Shikayat (1948), made in Poona; then came Bela (1947), a Ranjit production, and after that many more in which she played leading roles. She played the role of the court dancer "Bahar", who envies the love of Saleem(played by Dilip Kumar) with Anarkali (played by Madhu Bala) . The songs Teri mehfil mein and jab raat ho aisi matwali were picturised on her.[2] Her other films included Dara (1953) and Khyber.[1] 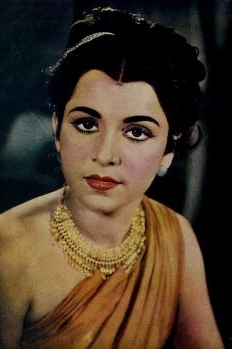 Portrait of Nigar Sultana from Khel

Nigar Sultana married two times. Her first marriage was with producer/director S. M. Yousuf, who migrated to Pakistan in the late 1950s. No children were born of this marriage. In the early 1950s, she was linked with Pakistani actor Darpan Kumar, who was also a Hyderabadi like her.[3] On 13 June 1954, Nigar Sultana held a press conference specifically to deny reports that she had married the Pakistani actor.[4]

Later, Nigar Sultana married K. Asif, producer-director of Mughal-e-Azam (1960). She became his third wife, and one of his previous wives was concurrently married to him. It remains legal in India for a Muslim man to have up to four wives concurrently. Nigar Sultana had a frosty relationship with her senior co-wife, Akhtar Asif, who incidentally was a sister of superstar Dilip Kumar, Nigar's co-star in K. Asis's own magnum opus, Mughal-e-Azam. K. Asif's second wife had been Sitara Devi, but Asif had divorced her within a few months of marriage and therefore Nigar Sultana never shared her husband with Sitara. Sitara Devi had previously been married to the actor Nazir Ahmed Khan, who was both the first cousin and the brother-in-law of K. Asif. Nazir Ahmed Khan's first wife, Sikandar Begum, was his first cousin and she was the sister of K. Asif.

Nigar Sultana and K. Asif became the parents of one daughter, the small-time actress Heena Kausar.[5] Heena Kausar, who appeared in bit roles in a large number of forgettable films, finally attained fame by marrying the dreaded underworld don Iqbal Mirchi, a close associate of India's most wanted criminal, Dawood Ibrahim. Among other crimes, Iqbal Mirchi is said to have laundered Dawood Ibrahim's ill-gotten wealth through his "successful business ventures."

Retrieved from "https://en.everybodywiki.com/index.php?title=Nigar_Sultana_(actress)&oldid=820000"
Categories:
Hidden categories:
This page was last edited on 19 June 2020, at 16:17.
This page has been accessed 247 times.
Content is available under License CC BY-SA 3.0 unless otherwise noted.
Privacy policy
About EverybodyWiki Bios & Wiki
Disclaimers